DAZN has been low-key, as platforms handle live-action freeze in different ways

You’ve seen it, different entities have been handling the down time different ways.

ESPN is a pack leader, and with no live events, it’s not a great deal of skin off their nose, because they are not boxing-centric. Saturday fight nights, with scraps from the Top Rank library, have done a decent job in saying hey, hello, boxing has delivered action and entertainment before, and will again, don’t forget about us.

And the PBC crew hopped to it, put thinking hats on, and they’ve been pushing shoulder/support programming to the fore, with releases going out to hype their podcast, and streamed shows, which spotlight the fighters working under the Al Haymon advisory umbrella.

Golden Boy, too, has beefed up their fare, going heavy on one of their strengths, the fight library.

GBP has put together new offerings like Pound 4 Pound Presented by Ring Magazine, a collection of the best fights picked by the staff at Ring Magazine. Also, Before They Were Stars is a series featuring professional debuts and early star-making performances.

And what about the still (sorta) new kids on the boxing block, DAZN?

It struck me the other day, I haven’t been getting a stream of releases from the DAZN gang, touting…well, what might they be touting? Are they touting?

You get conditioned in my business, sometimes, you get used to narratives being pushed at you, and get a release or some info and you run with it. That’s helpful, but also you can get locked into that rhythm, and not forage as much. I foraged…On the DAZN site, no notices for live fights on there.

OK, this I hadn’t seen before…Ak and Barak, who have the SiriusXM show, that show is presented as a slide show/audio stream on the DAZN site. That’s solid, the addition of photos and captions adds something to the program, though, to be honest, their interviews are of a caliber that they stand up without need for visual support.

The hosts have both fended off COVID-19 and are doing solid work interviewing fighters, promoters and some out-of-boxing guests.

And what’s this? Jabs with Mannix and Mora. That I hadn’t seen…OK, I’m now aware of it. That should be listenable, for sure, might even get a news bit out of it, if Mannix can lure Sergio into talking some smack. And there’s the Mannix podcast, juiced up with visual elements. Another filler, fare to keep a fight fan sated while live fights are not a thing, is “Saturday Fight Live,” in which DAZN takes a big bout, and has a look at it through new eyes. On Saturday, May 2, Canelo will watch his 2013 fight against Austin Trout and pipe in with his comments and share it with viewers. 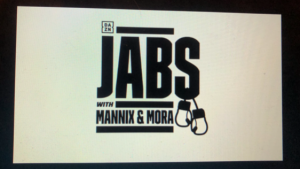 So, if anyone is there thinking that DAZN has said eff it, we’re takin’ a break, and we’re gonna sip Mai Tais till the coast is clear, not so. It’s been reported that management wanted to make sure they don’t waste dry powder–even though the ultra deep pockets of Len Blavatnik are fueling this endeavor–and so they have downsized some personnel in recent months, and have some staff on furlough. They are doing that because, yes, they are coming back, and they want to be conservative with outlay during this period of uncertainty. Staffers likely get paid half salary and they have a job waiting for them when the furlough period is over. And yes, they don’t know when that is, but every day we get closer to knowing.

A big deal, with eyes fixed on it, will be Georgia, Florida and South Carolina doing re-openings, and seeing how that goes. Nasty spikes, upticks in cases, will spook planners seeking to get going on making something of a sporting schedule. That goes for the boxing sphere, as well as baseball, and football and for the NBA gang figuring out how to finish the bizarro season.

Now, boxing is a different animal, so planning for the re-open doesn’t look and act like what the suits at MLB, NBA and NFL are doing.

We could see the DAZN higher-ups talking to their provider partners, Eddie Hearn and Oscar De La Hoya, and saying, “OK, if live fights can get going in June, what would you think you would start with? And if the push to re-open hits speed bumps, and we don’t do live action until August, what would you all do?”

Man, I’d looove to be the fly on the walls for some of the convos that are going to be happening in the next few months. We won’t be back to normal for a spell. And the calculus as to what fighters were making has changed. We’ve already heard, and understand, that for a mega bout like a Tyson Fury vs Anthony Joshua scrap, waiting is wiser. When planners are confident that patrons can pack into an arena or stadium, that’s when you’re likely to see the big bouts. Because the gate take from, say, the second Tyson Fury-Deontay Wilder bout is real money ($16.9 million for that clash, a record for a heavyweight boxing faceoff), and goes toward those checks that make the fighters happy. Moving forward, will all the fighters and managers get that pie slices could be smaller, without gates contributing to the pot?

A corporation like DAZN will be aided by seeing how others do it. Dana White will go out on a limb May 9, and assemble MMAers in Jacksonville, Florida, for UFC 249. The scraps will run on pay per view, which are available through ESPN+, the ESPN stream stop. No fans will be allowed in to watch, so that removes one element of iffy-ness from the equation. The MMA A league will do three shows in a seven-day period from the same venue, the Veterans Memorial Auditorium.

“The UFC’s contract with ESPN requires the company to put on 42 events in 2020,” according to the Wall St Journal. The UFC has held seven so far in 2020. Do that math…They need to make up ground, keep money flowing in, as it’s been reported the company took on $2.3 billion in debt when purchased by Endeavor.

This was more of a marriage between Wall St and pro sports than we typically see, and we all pretty much get that on Wall St, performance, often measured quarter to quarter, is really about that bottom line. The thrill of victory in the Octagon is meaningful to the athletes, but the game is about higher stakes for investors in UFC, and holders of their debt, and Endeavor.

As was put in a SportsProMedia story: “With virtually all live sport on hiatus and none of Endeavor’s portfolio of interests in the sector bringing in revenue, the US$4.6 billion in long-term debt and overall liabilities totaling US$7.2 billion reportedly leave the agency in a precarious position.Based on Endeavor’s IPO filing from September last year, its entertainment and sports division – including live entertainment and media rights revenue – brought in US$2.3 billion in 2018. That is significantly more than the US$1.3 billion in revenue from WME during the same period.”

So, the show MUST go on for UFC, and so they can be a test case in the combat sports world. I think it’s safe to say the same sorts of pressure isn’t on DAZN, part of the Blavatnik’s Access Industries conglomerate. Blavatnik is the 27th or so richest person in the world, and could pay off Endeavor’s total liabilities and still have like $12 billion in the bank.

All this is to say, the DAZN play during this hiatus time makes good sense to me, when I sit and ponder. The decision to takes some breaths, see how dust settles and not try to pretend like this hastily assembled fill-in fare is anywhere near as alluring as Canelo v GGG 3, Anthony Joshua fights, and scraps involving Danny Jacobs, as well as young guns Devin Haney and Ryan Garcia, I see the validity there.

Live fights will be back, the push to get subscribers will continue anew. There’s content to take in on the DAZN platform, so the die-hards have options to satisfy their habit. And guess what? Being that boxing basically is one never-ending season, a bit of a break, even if it is because of this dreadful viral marauder, isn’t all bad.

—Michael Woods is a Brooklyn resident, who started at NY Newsday, then went to ESPN The Magazine, and currently publishes NYFights.com. He’s done the “Talkbox” podcast on the Everlast platform since 2016.