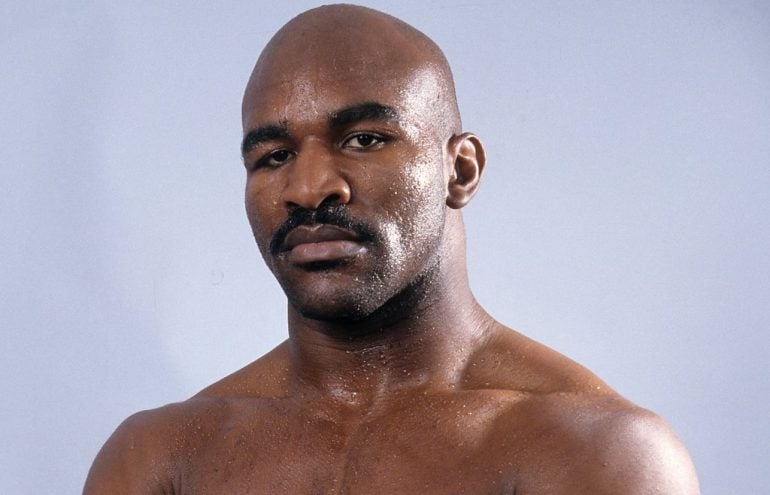 Photo from The Ring archive
30
Apr
by Anson Wainwright

Editor’s Note: This feature originally appeared in the July 2017 issue of The Ring Magazine.

Evander Holyfield is arguably the greatest fighter since the heyday of Sugar Ray Leonard and Roberto Duran.

Consider his accomplishments: He won an Olympic bronze medal (after a controversial disqualification in the semifinals), is the greatest cruiserweight in the division’s nearly four-decade history and is a four-time heavyweight titleholder even though he was undersized. On top of that, he had a warrior mentality that endeared him to millions of fans worldwide.

That’s a legacy that is hard to match, which is why he was a no-brainer when it came time for first-ballot induction into the International Boxing Hall of Fame.

Holyfield was introduced to the world during the 1984 Los Angeles Olympics, when his dreams of winning a gold medal were dashed the moment he knocked out Kevin Barry with a left hook a split second after referee Gligorije Novicic yelled “stop!” He was DQ’d, leaving him out of the final.

The unfortunate loser was devastated but still relishes his Olympic experience.

“We did that for free. We were doing it for the country,” said Holyfield, who finished his amateur career with a record of 160-14. “That’s what the Olympics were; they meant more. It gave us an opportunity to show how great our country is.”

Holyfield made his pro debut later that year and went on to become the first member of the ‘84 team to win a pro title. In just his 12th fight, he edged the tough, tenacious and more seasoned Dwight Muhammad Qawi over 15 brutal rounds to win the WBA cruiserweight belt.

Holyfield went on to add the IBF and WBC titles before moving up to heavyweight in the summer of ’88 and building toward a championship fight. The next 20-plus years would see an epic series of ups and downs. They included: His third-round knockout of Mike Tyson-conqueror Buster Douglas to become undisputed heavyweight champion; his three-fight series with the talented and much bigger Riddick Bowe, whom he beat once in three memorable fights; his surprising loss to Michael Moorer, which he later avenged; his later series with Lennox Lewis and John Ruiz, against whom he became champ for an unprecedented fourth time; and, most notably, his historic two fights with the biggest prize in boxing, Mike Tyson. 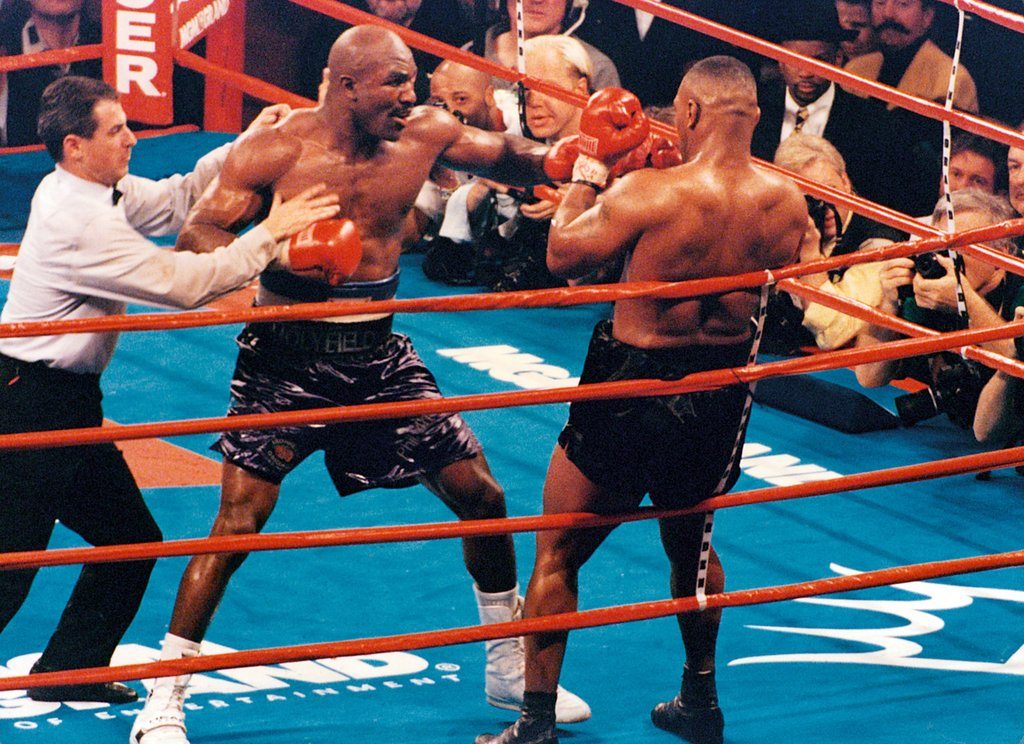 Holyfield (left) on his way to stopping Mike Tyson in their first fight. Photo from The Ring archive

“There was no intimidation,” Holyfield said of the first Tyson fight, in November 1996. “With me, I just realized I wasn’t going to get beat by a reputation. My mom said, ‘To be a champion, you have to beat the champion. Don’t let a reputation beat you.’”

Holyfield was as much as a 25-1 underdog after a knockout loss to Bowe and a shaky performance against Bobby Czyz, yet he stunned the boxing world by stopping Tyson in 11 rounds to win the WBA title. The infamous rematch took place the following June, when Tyson was disqualified for gnawing off a portion of Holyfield’s ear.

That title reign ended when Holyfield lost to Lewis in November 1999. He won one last belt with his victory over Ruiz and almost won a fifth title against giant Nikolay Valuev in 2008 before fighting for the last time in 2011.

He couldn’t have accomplished much more.

“I made sure I fought everyone that I thought was going to be anything. I fought ’em all,” he said.

BEST JAB
Riddick Bowe: I would say Riddick Bowe and Lennox Lewis, they are the only two guys who could keep me off with the jab. I would say Bowe; he was consistent with it. Lennox kind of had it but Bowe used it for offense and defense, and at any given time he’d use the left hand. Oh yeah, it was powerful. Larry (Holmes) had one of the best jabs in the world but he didn’t use it on me.

BEST DEFENSE
Dwight Muhammad Qawi: He had a good defense. He’d get you before you get back home. He was short and had long arms. He had the wrong arms – he had monkey arms! Very good defense.

FASTEST HANDS
Michael Dokes: I can tell you the people who had good hand speed – Michael Dokes would be the first one. I hit him with six and he’d hit me with six. (Laughs.) He could have his hands down and throw punches from different directions and get you before you were able to get your hands up. He was quick and he had punching power as well. I would say Bowe, too; he would reach out and get you.

FASTEST FEET
Chris Byrd: The people that I fought.. nobody ran because I was a smaller guy. Let’s give it to Chris Byrd; he got around and that’s how he won.

BEST CHIN
George Foreman: I would say George Foreman. I hit him and I hit him a lot of times, a lot of times (Laughs.) … 17 punches one time! Lennox Lewis had a great chin. I went back and watched the fights and the people who knocked him out [did so] because he had a different mindset for them. He didn’t fight smart with them ‘cause he felt he could beat them. Everybody he pursued and thought that he could beat, they ended up knocking him out – that’s Oliver McCall and Hasim Rahman. I came to respect him ‘cause I know in the last fight I buckled him a few times but he didn’t go. Mike Tyson had a good one, too; he didn’t fall when I hit him.

SMARTEST
Lennox Lewis: Lennox Lewis was that guy; he fought like a big man, he fought his style regardless. Whether people boo or not, he was gonna fight his way. I realized he was going to fight the perfect fight. He was a smart fighter, he stuck to the game plan.

STRONGEST
Foreman: Out of all the people, I would say George Foreman was the strongest. And behind him Lennox Lewis and Riddick Bowe. I could push anybody back, it wasn’t a problem. I couldn’t push George back. (Laughs.) You had to go around him.

BEST OVERALL
Bowe: I would say Bowe. I had three fights with Bowe. He was very competitive, he was always going to be in shape when he fought me. Then… I would say Qawi.