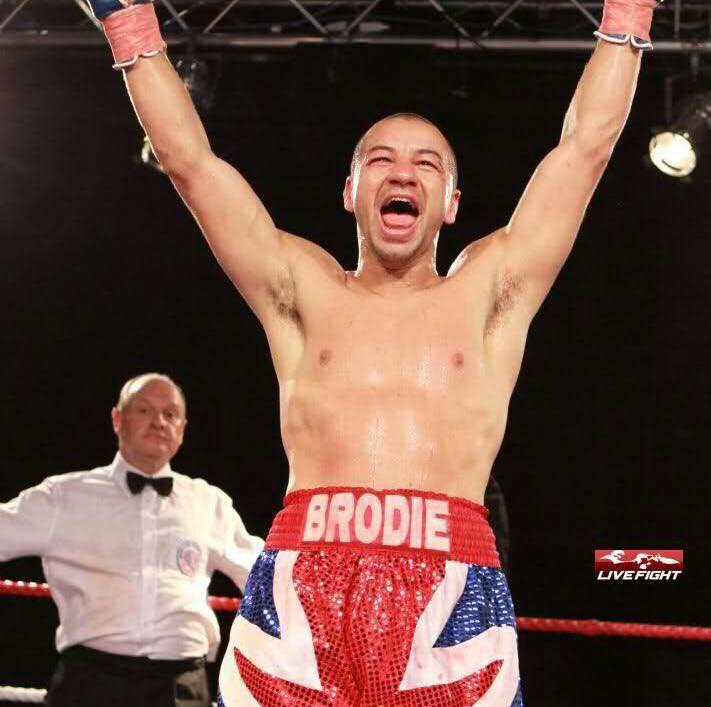 Michael Brodie thrilled fans in his native Manchester during a 15-year career. Photo from Brodie's Facebook
26
Dec
by Ryan Songalia

Former featherweight contender Michael Brodie is back in the gym. No, Brodie isn’t training for a comeback. At 38, this native of Manchester, England has reconciled that his days as a fighter are over. What brings him to Taylor Made Fitness each morning is his search for the next British boxing superstar. In a group of youngsters from the same streets as himself, he intends to find a standout or two.

“Look, if I can do it so can they,” says Brodie, whose professional career stretched from 1994 to 2009, resulting in a professional record of 36-4-1 (24 knockouts). “I will show them how to box proper because it’s an art, not just combat. I want my lads fighting off the back foot, hit and move, you know what I mean?”

The gym, which is in the Newton Heath section of Manchester, is a refuge for wayward teens, a sort-of in-school suspension destination where kids who have been kicked out of school can do their schoolwork and learn a little boxing on the side. Mike Taylor, who owns the gym, says Brodie is a welcome addition to the facility.

“He’s been there, seen it and done it,” said Taylor. “He’s been a bad lad at school, and boxing and fitness changed his life around just like me. We need people around the young people who have been there and learned from their mistakes.”

Brodie, who has been training at the gym for less than two months now, loves the atmosphere of the gym. It allows him to be close to the sport that made him a popular fan favorite, filling the M.E.N. Arena in Manchester and York Hall in London full of admirers spurring him along with soccer chants.

“There’s only one Mikie Brodie, walking along singing a song, walking in a Brodie wonderland. That’s what they used to chant,” remembers Brodie, who claimed that fans of fellow Mancunian Ricky Hatton “nicked” the gimmick, adopting it to Hatton and making it a staple of his image.

Training allows Brodie to remain close to the sport where he was able to win British, Commonwealth and European titles, while challenging four times for a world title.

More importantly, it allows Brodie a chance to rebuild his name, following acquittal on charges that he had transported £138,000 worth of cocaine (about $220,000) that was found in the back of the taxi cab he was driving. According to the Manchester Evening News, Brodie was arrested last Fall when a package of cocaine was found under the passenger seat. Brodie spent two months in HM Prison Preston, a correctional facility he calls “horrible” and “the worst place in the world.”

Brodie maintained that he was just a driver commissioned to drive a fare down to Blackpool for the day and that the passenger he had dropped off had left the package in his car. It wasn’t until a year later that Brodie was eventually found not guilty, allowing him to breathe easy once again. The passenger pleaded guilty to the charge.

“I feel back to my normal self, no more thinking about jail,” said Brodie. “I am never going jail ever again. It is not me, I am better than that. I am looking at getting back into boxing and putting the past behind me.

Brodie says that drugs and crime were never something he was into. “Why would I be a taxi driver if I was gonna be a drug dealer? I have been brought up better than that, even though my mom wasn’t there. My mom died when I was ten but I know right from wrong.

“It makes you laugh though when people jump at the chance to put you down, yet when you was at the top everybody wants you.”

Before Hatton, Brodie was the boxing star of Manchester. An aggressive featherweight with a withering body assault and two-fisted power, Brodie won his first 29 bouts, engaging in more wars than he in retrospect would’ve preferred. In his 30th bout, Brodie met a fellow unbeaten contender named Willie Jorrin from Sacramento, Calif. in Manchester for the vacant WBC junior featherweight title in 2000.

Despite being dropped in the tenth round, most felt Brodie deserved the decision, but two judges awarded Jorrin the majority decision verdict and the title.

By 2002, there were talks of Brodie clashing with “Prince” Naseem Hamed, who was recovering from his humbling defeat to Marco Antonio Barrera a year earlier. Brodie had left promoter Frank Maloney and aligned himself with Matchroom Sport, which promoted Hamed in England.

“He beat me in the amateurs so I wanted revenge,” said Brodie. “Me and ‘Naz’ was pals, he said ‘sign it and I will fight you.'”

When Hamed faced Manuel Calvo in May 2002 in his first fight back from the Barrera fight, Brodie was the co-featured bout, pounding out a unanimous decision over durable Argentinian Pastor Humberto Maurin.

Both won, clearing the way for them to meet, or so it seemed.

“[Hamed] said he was gonna fight me, then promised me to let him have one more fight with Barrera,” said Brodie. “You know what happened. Didn’t hear from him again.”

Hamed never fought again after that night, despite hinting numerous times at making a comeback. “I think he just stopped because he had loads of money and felt embarrassed from getting beat by Barrerra.”

Instead, Brodie would fight Korean In-Jin Chi for the vacant WBC featherweight title. Their first meeting in 2003 resulted in a draw, and a rematch was scheduled the following year for the vacant title.

“The second fight I had with Chi, he came back a different man; he was huge.”

Brodie, who most had thought was more effective as a junior featherweight, had talked about boxing and moving in the run-up to the fight, but when the bell rang, he resorted back to his brawling ways. By the seventh round, he knew he was beat.

“I got to the seventh and it came in my head that they will give it him again so I just retired,” said Brodie. “I just gave up. That man was an animal.”

Brodie took two uppercuts from Chi and went down on all fours, ducking his head low, exposing the “Brodie” tattoo on his upper back before resetting to his knees to hear the ten count. Brodie would fight once more for the title, losing to WBO featherweight titleholder Scott Harrison, being stopped in four rounds in 2005. That would be his last fight for four years.

By his own admission, Brodie came back in 2009 for the money, returning at 132 pounds. He was dropped in his comeback bout twice before knocking the journeyman out in the fourth. Brodie wouldn’t be as lucky in his second bout back, being knocked out in three rounds by fellow Manchester resident Anthony Crolla, prompting Brodie to retire for good.

“I thought I would give it a go to make a bit of cash and see if I could return them golden years back, but got beat by a local kid,” said Brodie. “I am glad that he beat me though, rather than someone I don’t know.”

While on the subject of Manchester boxers making a comeback, I asked him about Hatton’s recent ill-fated comeback, where he was knocked out in nine rounds by Vyacheslav Senchenko in November after three and a half years away from the ring.

“I thought he was daft,” said Brodie. “He has had his glory days and you can never get back to your best, no matter who you are. You have got to live in the gym and push your body to the limits.”

There will be no more comebacks from Brodie, he assures. Brodie is content to focus his attentions on helping others realize their own fighting dreams.

“I think I will be a good trainer because I know what you need to be a good fighter and I got to the top,” said Brodie. “You can never keep a good dog down.”