ALERT: You can hop in and join the Heather Hardy Instagram Live workout 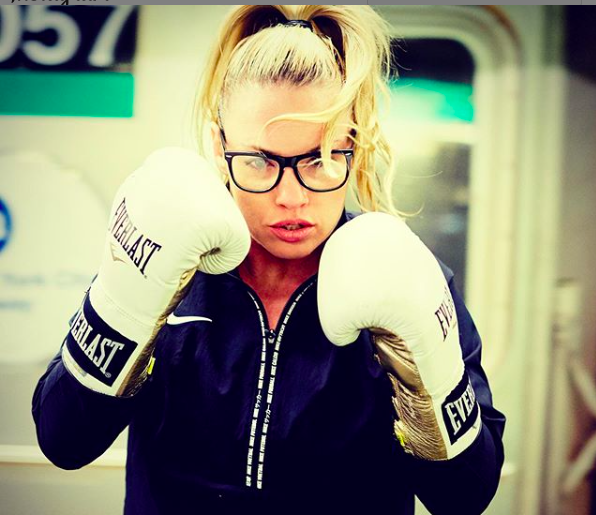 New lessons are being learned every day, for many of us, as we deal with the new normal for now.

Me, I’ve learned that I did get more exercise than I thought just from walking. Walking the little one to school, walking home, going to pick her up, and walking back, trekking around doing errands, I was getting a good number of steps on.

(No, I wasn’t in Fred Sternburg territory, but I wasn’t a total schlub.) 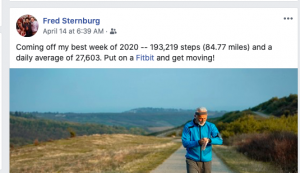 Now, minus the walkabouts, I’m in search mode for how to fill that vacuum. Turns out less movement, and more ice cream, means I’m a bit more off my high school playing weight than I’d like.

OK, more than a bit.

I will have to seriously consider this option: Heather Hardy, the former featherweight champion who makes the borough of Brooklyn her home, is streaming live workouts on her Instagram daily. 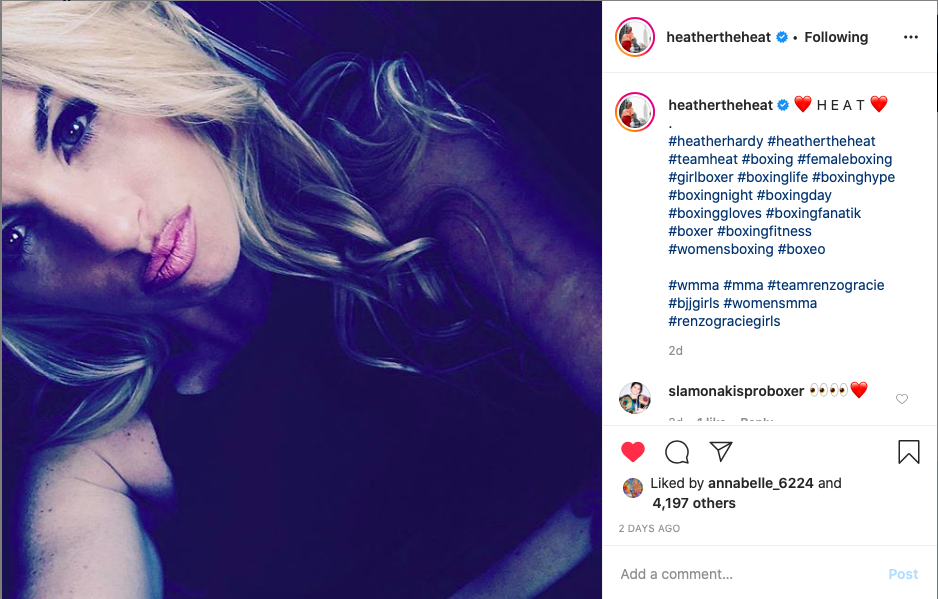 Heather Hardy is a role model for girls and women the world over, for getting over high hurdles, taking up boxing late, and grinding to a world championship.

The DiBella Entertainment athlete does sessions at 12 noon, or 2 PM, or 3 PM ET; so I reached out to the role model for perseverance and courage in the face of mountainous impediments, asking about this new endeavor.

“It started out, me teaching a small group of my friends daily,” the 22-1 boxer said. “We would pick a time, and five of us would Face Time and work out together. Kinda like being at the gym. And by the time the week was out I realized how many other friends or clients might want a quick 30 minute workout session. People are stuck at home all around the world, some days only taking steps from the kitchen to the living room to the bathroom. After just two weeks, all my friends working out just for 30 minutes a day were getting helped in everything from mood, to aches and pains, to sleep patterns. So I wanted to share it with all my friends and fans.”

Hardy’s gym home base is the famed and fabled Gleason’s Gym, the most famous boxing gym on Earth, owned and run by the uber mensch Bruce Silverglade. He’s planning to re-open the gym as soon as New York’s leadership deems it safe and appropriate to allow patrons to move off of lockdown status.

Hardy told RING about some of the other elements of her workouts. “The classes are free, but donation based,” said the boxer, who also reps Everlast, and helps spread the word about their commitment to athletes who have soldiered on through hard challenges.

“I realize all of us are out of work, nobody really has money, but teaching these little classes are worth it even if it’s for nothing, it’s just 30 minutes of my day.”

She keeps it fresh by invited friends, fellow fighters, into the mix. “I’ve gotten some fun girls to come workout with me, done some Q n As, and really had a chance to interact with the fans.” So far, Bellator MMAers Ilima-Lei Macfarlane (see below), and Leah McCourt, ex Bellator champ Zoila Frausto and fellow Gleason’s pugilist Ronica Jeffrey, who has held belts at feather weight and super feather, have virtually convened with Hardy and fans and workout craving lock-downers. “It’s fun to see how other champions work out, their favorite exercises. We get to cross promote each other.” 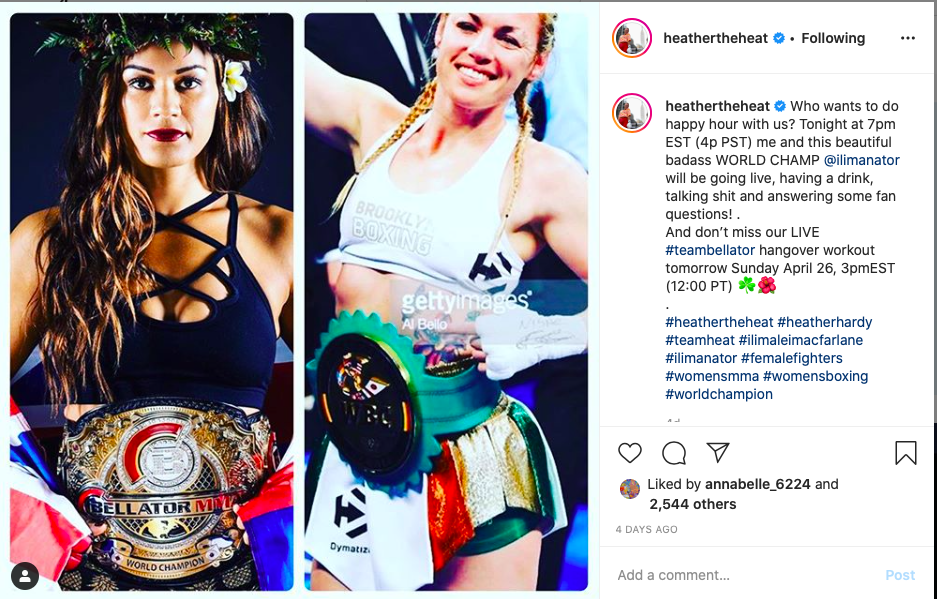 So, does Hardy see this “thing” as a silver lining scenario?

“Honestly, I don’t know, I know a lot of people write me thanking me for the class,” said Hardy, who has a 2-2 record in MMA and is proud to be on the Bellator roster.

“I don’t know what I’m doing, to be honest, but I know it’s giving some folks something to look forward to. I was hoping for more donations, but I’m not expecting anything, really, because I know that’s not ultimately why I’m doing this, we’re ALL out of damn work and lots of people can’t afford this type of shit. The workouts are only 30 minutes, it’s the least I can do!”

In NYC, we’re headed to the third month we’ve been living in the new reality. Mid March, things kicked into a clarity zone for most of us, the lucky ones who weren’t sick, or battling the beast in an ICU. Even if we lost a job or what have you, we looked around and understood that friends and neighbors and strangers were struggling with harsher challenges. By the second week of April, we hoped for the peak to pass, and some novelty had worn off. Too many stories of frontline healthcare workers not having proper PPEs pissed us off, royally, so we coped with sadness, fear, and anger management. Now, as we look at May Day, Friday, we know we hear fewer sirens, and are wondering if other states will become hot spots because of the call to kick-start the economy. I asked Hardy for step-back assessment of all this, just as I did at the start of the coronavirus assault on The City.

“I’ve learned to adapt,” she said. “I think as parents (her daughter is 15, a sophomore in high school, we had no time to get into a slump because we have to be present for our kids. Life changed overnight but look at us seven weeks later doing the things. We’re all anxious to get back, but one thing I learned back in 2001… New Yorkers are a different breed. When we were told to stay home because we were putting other New Yorkers at risk, an overwhelming majority of us did exactly that. New Yorkers have each other’s back, always.”

Michael Woods is a Brooklyn resident, like Hardy, who, full disclosure, was in a Houseparty chat with Woods’ wife last week. Follow Woods on Twitter for opinion and news, on boxing and other subjects.