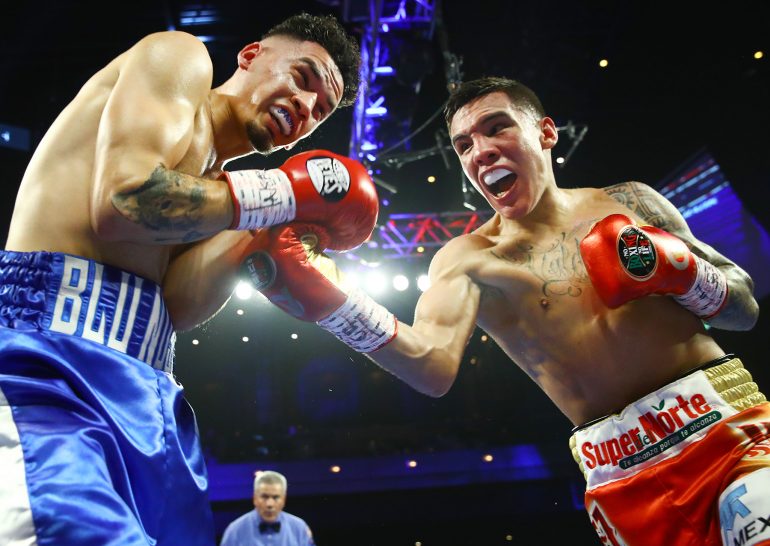 There are world titleholders and contenders who will want a tune-up fight when boxing resumes. Oscar Valdez is not one of them.

Valdez, who is the mandatory challenger to face Berchelt, made his debut at 130 pounds on November 30, overcoming a knockdown in Round 2 to stop late-sub Adam Lopez in the seventh. Valdez thought he had a date lined up but was disappointed when it fell through.

“There were rumors it was going to be May 9,” Valdez told Top Rank’s Crystina Poncher in an online interview last week. “I was already back in training camp in San Diego, but then we got the news that (the date was for) Jose Ramirez and Viktor Postol. We just continued training, it wasn’t going to hurt us to remain in camp.”

“The fight hasn’t been announced yet, but it’s a mandatory fight. The fight has to happen. I think, on our side, we’re ready to sign the contract because I’m going for my dream. I want that belt. We want to make it official, and I was already training for that fight. It is what it is.”

The 29-year-old, who is managed by Frank Espinoza and trained by Eddy Reynoso, is back at his home in Hermosillo, Mexico, where he continues to train.

Valdez is always in the gym improving his skill-set and defense under Reynoso, who also trains Canelo Alvarez. He believes he may have overlooked Lopez, who replaced fringe contender Andres Gutierrez when he weighed in 11 pounds above the contracted weight.

“It’s funny, I was in the best shape of my life, one of the best training camps I’ve had, but yeah, one of my worst performances,” Valdez recalled. “It’s just pretty weird because, like I said, I was feeling great.

“I think I was a little too confident in there, (thinking) that I was going to take my opponent out. That’s something no boxer should ever do in the ring. Sometimes you make those mistakes. I paid the price, I underestimated Adam Lopez inside the ring for a couple of seconds.”

Valdez has a backup plan if he is not able to land the Berchelt fight. He has mentioned facing Leo Santa Cruz in the past, but Shakur Stevenson is another fighter who has surfaced as a potential foe. Both Valdez and Stevenson fight under the Top Rank banner.

“I would love a fight (against Stevenson), especially now,” said Valdez. “There’s a lot of people, including him, who think I’m avoiding that fight. I’m not. I’m chasing my dream to become a world champion (at junior lightweight). I want to fight for the world title with Berchelt, who is a tougher opponent than him. No offense to Shakur – Shakur is a great fighter – he’ll be up there, we’ll have to fight sooner or later. If he goes up to 130, I’ll gladly fight him.

“We’ve been wanting to fight Leo Santa Cruz for a long time, but due to the politics of boxing, him being with PBC and other promotional companies, I think that’s the main reason why these fights don’t happen. That’s why I’m so excited that I get the chance to fight somebody like Berchelt because this is a big name, he has a title belt. If the fight happens with Santa Cruz eventually, I would love it because his style and my style would definitely be a fan-pleasing fight.”

Valdez makes the junior lightweight division more competitive. Despite all the options at 130 pounds, he has only one name on his mind.

“I think Berchelt is the toughest fighter in that division. That’s why we’re going after him. We want to go for everything.”