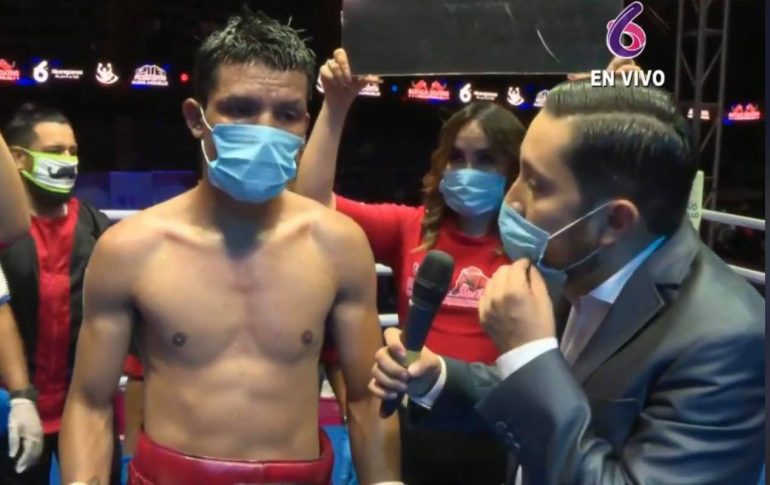 After more than a month without a professional boxing card, the sport returned Saturday, April 25, though signs of the times were all around.

Ringside officials, commentators and ring card girls wore masks over their faces, though the fighters were able to discard them once the bell rang. Fans scattered the Alexis Arguello Gymnasium, with empty seats in between to maintain some semblance of social distancing. Spectators had their temperatures taken through their foreheads with no-contact thermometers, and hand sanitizer was sprayed onto their hands upon entrance.

A minute of silence was observed in memorial of those who have died from COVID-19.

The club show card in Managua, Nicaragua was able to proceed forward due to a lack of stay-at-home orders in the country, which has reported only 11 coronavirus cases with three deaths. The card, the sport’s first since a small event on March 19 in Wuppertal, Germany, attracted viewers through Canal 6’s Facebook live feed and ESPN Deportes, many of whom would have looked for a higher profile show on a normal Saturday.

But with just one other event scheduled for the day, a lower caliber three-bouter in a South Korea boxing gym, Managua was momentarily the center of the boxing universe.

“Here, we don’t fear the coronavirus, and there is no quarantine,” promoter Rosendo Alvarez, a former two division champion himself, told the Associated Press this week. “Nicaragua is a poor country, and the boxers have to eat. They can’t stay shut up in their house.”

For what the card was, it delivered, with much of the event featuring 50-50 matchmaking.

Robin Zamora provided some pageantry with his entrance, with two rappers accompanying him on his ring walk. He had beaten fellow Managua resident Ramiro Blanco by second round stoppage in their first meeting last October, and Blanco was out for revenge.

Zamora, a southpaw, and the right-handed Blanco drew applause from the audience, trading uppercuts and body shots on the inside, while showing enough craft and defense to satisfy purists as well. Tempers heated up towards the end of the seventh, as both men fired punches after the bell. The two-way action continued through the eighth and final round, though they embraced after a fine effort that gave fight fans a reprieve from withdrawal symptoms.

Ramiro Blanco and Robin Zamora trade punches after the bell in Nicaragua! It appears they also missed boxing! ? pic.twitter.com/sgxNl5CsL7

The one fighter on the card who fans may have heard of was Freddy Fonseca, who lost by seventh round stoppage against Joseph Diaz on the Canelo Alvarez-Daniel Jacobs card in May of 2019. Fonseca (28-5-1, 19 KOs) ended a two-fight losing streak as Alain Aguilar (8-8-2, 1 KO) was counted out on his stool after not answering the bell to begin the fifth round.

Old feuds were settled, as Byron Castellon (15-13-3, 2 knockouts) finally earned a win over Eliezer Gazo (18-11-2, 3 KOs), winning a unanimous decision in their action-packed six-round strawweight bout, after having gone 0-4-1 (1 no contest) in their previous six meetings. In a six-round featherweight, Edwin Tercero (16-11-1, 4 KOs) proved his victory over Franco Gutierrez (10-4, 6 KOs) last January was no fluke, using movement to attack from awkward angles and outhustle the taller Gutierrez to a unanimous decision win.

Gabriel Escalante (13-0, 7 KOs) kept his winning streak alive with a fifth round knockout against the overmatched Mario Mairena (2-20-1, 1 KO) in a six-round welterweight fight. The 22-year-old Escalante, who has faced soft opposition since turning pro in 2017, started slow before ending the bout with a left hook to the midsection.

Hwang Kil Kim (12-2) drops Jae Duk Bae (4-7) early in the 1st and then ends it seconds later to the body for a TKO-1 victory in their welterweight bout from Gimpo, South Korea pic.twitter.com/UpXB5m2ddv

In South Korea, a few standing spectators were able to observe from one side of the ring at Legend Boxing Gym in Gimpo. The main event saw Hwang Kil Kim (12-2, 6 KOs) knock out Jae Duk Bae (4-7, 2 KOs) with a left hook to the body in the first round of their eight round-schedule welterweight bout.

South Korea, which had been one of the earliest countries inundated by the pandemic, has seen a decline in the rate of new cases in the country due in part to extensive testing and contact tracing.