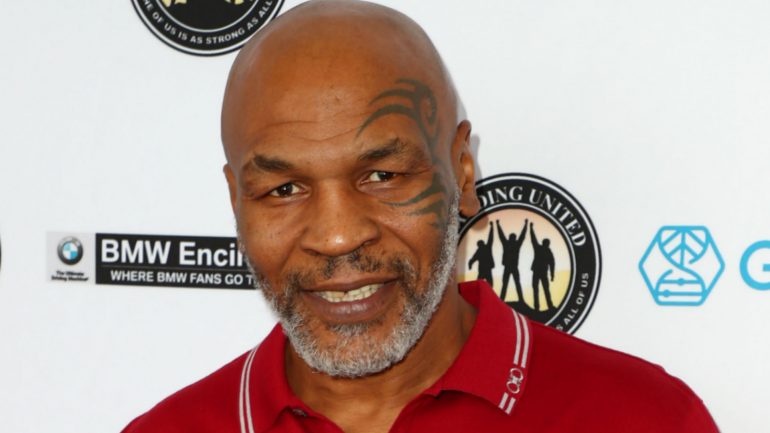 Mike Tyson says that he’s working on a return to the ring for charity exhibition matches.

The 53-year-old former undisputed heavyweight champion revealed his interest putting the gloves back on in a conversation with rapper T.I. over Instagram Live video Thursday. The bouts would be three or four rounders to benefit “some homeless and drug-affected motherf—kers like me.”

“I’ve been working out, I’ve been trying to get in the ring, I think I’m going to box some exhibitions and get in shape,” said Tyson, said Tyson, a marijuana entrepreneur who appeared to be indulging in the video.

“My body’s in pain, I feel like three guys kicked the shit out of me.”

Tyson (50-6, 44 knockouts) was inducted into the International Boxing Hall of Fame in 2011. He hasn’t had a pro fight since 2005, when he retired on his stool after six rounds against Kevin McBride. Tyson returned to the ring a year later in an exhibition against his former sparring partner Corey Sanders in Youngstown, Ohio, wearing headgear and a shirt supporting Michael Steele’s U.S. Senate candidacy.

The bout was advertised to be the first of 12 dates, and was broadcast live over pay-per-view, but none of the other dates materialized.

Tyson has been staying busy in the digital space, hosting the “Hotboxin’ w/ Mike Tyson” podcast and playing with his dog Mars, who has over 18,000 followers on its own Instagram account.

Every once in awhile Tyson shows off a few of his old moves while imparting boxing tips to celebrities, and exhibits glimpses of the ability that made him the youngest heavyweight champion in boxing history. Still, Tyson says his timing has yet to return, but that he’s putting in plenty of work to return to a state of fitness.

“I do two hours on cardio, I do the bike and the treadmill for an hour, then I do some light weights, 300, 250 reps. Then I start my day with the boxing thing, I go in there and hit the mitts, 30 minutes, 25 minutes, starting to get in better condition,” said Tyson.