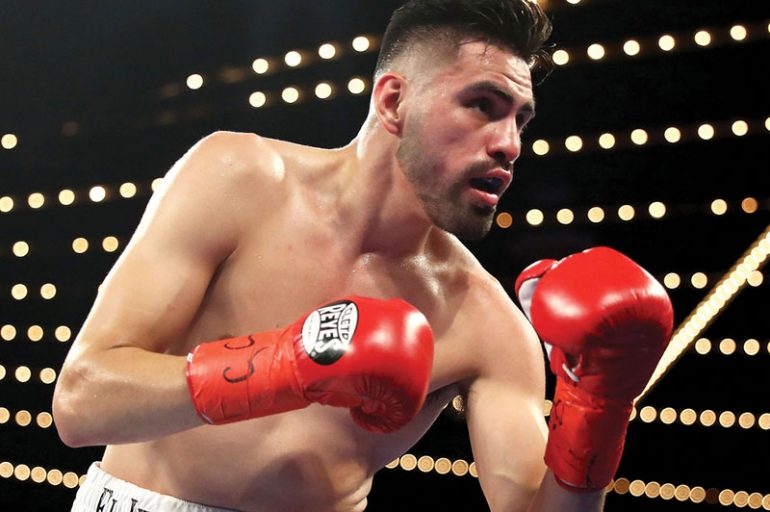 Jose Ramirez during his title-winning fight against Amir Imam in 2018.
17
Apr
by Francisco Salazar

Even after big paydays and fighting on ESPN in recent years, Jose Ramirez has not forgotten his roots.

The 27-year-old Ramirez, who was born and raised in farming community of Avenal, has been an outspoken advocate of farmworkers’ rights. His father Carlos was a farmworker, working 10-hour days, especially during the summer in 100-degree weather.

Farmworkers are paid by the hour or by the amount of produce that is picked, depending on the grower. Several farmworkers live paycheck to paycheck and some throughout California have seen a reduction in hours and days worked in recent weeks, which puts a strain on their financial status.

Ramirez and his team have committed to a minimum of 1,000 appreciation boxes, which contain essential household items such as toilet paper, facial tissue, detergent, cleaning supplies, other non-perishable items, and preventative health items and educational information. The goal is produce at least 5,000 boxes. In addition, 10,000 face masks for workers and their families will be distributed.

“Agricultural workers are our neighbors, friends and the glue that holds our communities together,” said Ramirez. “Without their essential work, life would be very difficult during this COVID-19 pandemic. They are at work while stores run out of toilet paper and other essential items. These workers are fighting hard for us night and day to keep food on the shelves. They are risking everything, and we want to fight for them right now and show our support.”

Ramirez announced he would personally travel throughout the San Joaquin (Central) Valley, where Avenal and several farming communities are located, to hand out these appreciation boxes to families. Included with the appreciation boxes will be a signed picture from Ramirez with a personal note and a pair of free tickets to his next fight in the Central Valley.

For promoter Bob Arum, the generous gesture by Ramirez is not surprising.

“The Central Valley is a special place full of dedicated men and women who are out in the fields helping to sustain Americans through this trying time,” said Top Rank chairman Bob Arum, Ramirez’s promoter. “Jose and community leaders across the Central Valley are rallying together for a wonderful cause.”

Ramirez was scheduled to defend his WBC/ WBO world junior welterweight title belts against Viktor Postol at the Save Mart Center in Fresno on May 9, but the fight was postponed to later this year due to the COVID-19 pandemic.

If you are a large or small business and wish to donate items for the creation of these appreciation boxes, email Rick Mirigian at [email protected] or call him at (559) 614-5686.