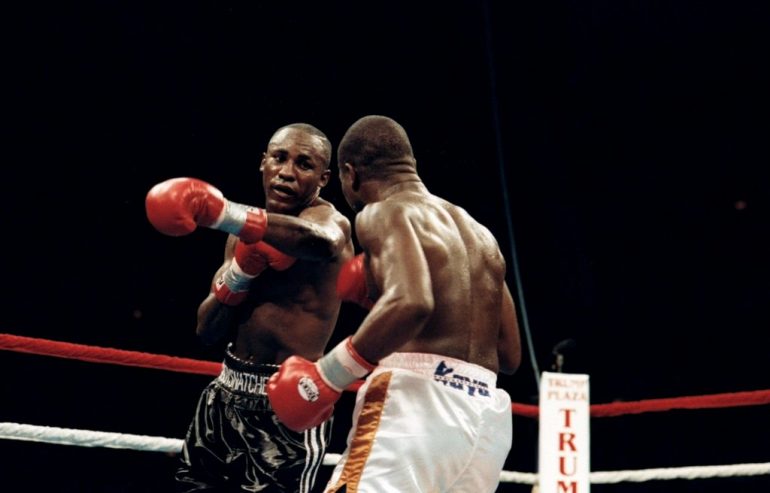 McCallum in action against James Toney. Photo from The Ring archive
14
Apr
by Anson Wainwright

Editor’s Note: This feature originally appeared in the February 2020 issue of The Ring Magazine.

Mike McCallum fought his way out of obscurity in Jamaica to the top of the boxing world. However, for much of his career, the highly skilled boxer-puncher was deemed too much risk versus not enough reward and was one of the most avoided fighters of his era.

McCallum was born in Kingston, Jamaica, on December 7, 1956. He was an only child and enjoyed life on the island before finding boxing at 15 years old.

“I went to church every Sunday with my mom and dad,” McCallum told The Ring about his early years. “I went to school and I came home, played around with the other kids. 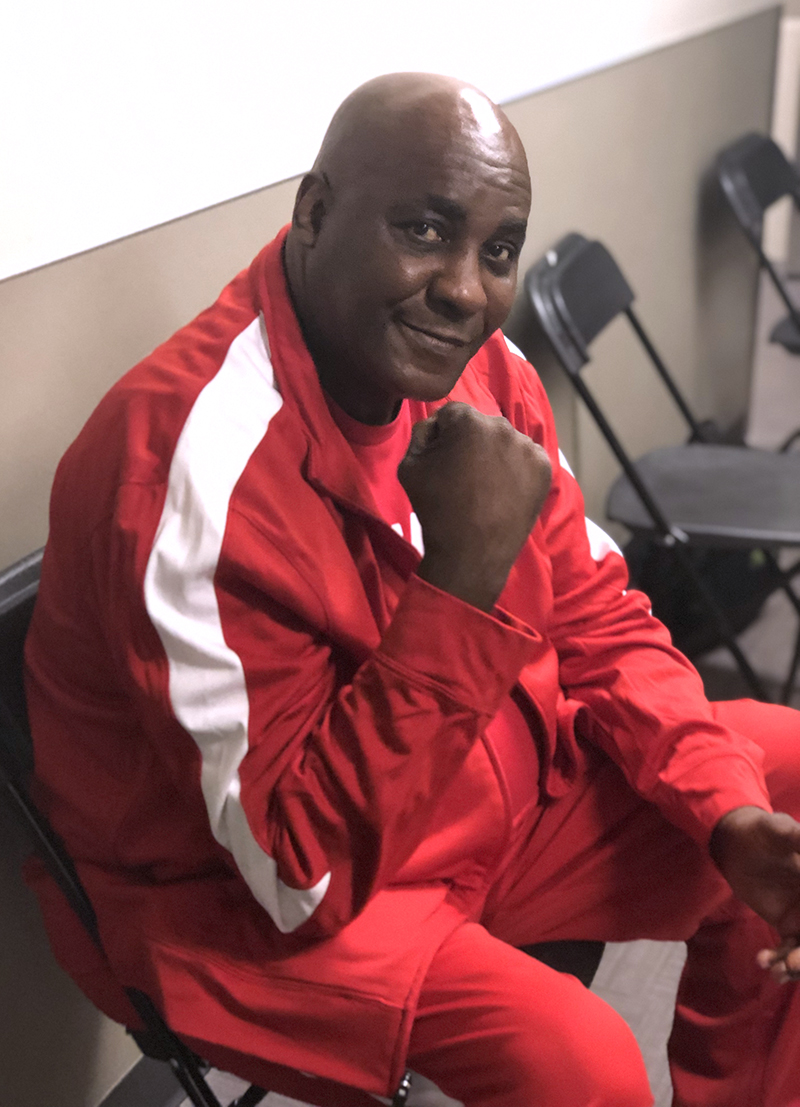 “I got into a few fights, and one time I went to a boxing club in the neighborhood that was well-known in Jamaica. I started throwing punches. I didn’t know anything about boxing. One guy said, ‘Mike, do you see that? You’re natural.’”

McCallum went on to become a decorated amateur. He represented his country at the 1974 World Championships and 1976 Olympics and won gold at the Commonwealth Games in 1978. He hoped to go the 1980 Olympics, but those aspirations were cut short due to appendicitis. He posted an impressive 240-10 amateur record before turning professional in early 1981.

The legendary duo of George Benton and Eddie Futch helped fine-tune McCallum from there. “They were both geniuses,” he said.

McCallum marched to 21 straight wins before meeting Sean Mannion for the vacant WBA junior middleweight title on the undercard of Marvin Hagler-Mustafa Hamsho in the fall of 1984. McCallum boxed superbly and won a unanimous decision. He would defend the title six times against the likes of David Braxton (TKO 8), Julian Jackson (TKO 2) and Donald Curry (KO 5).

“The Bodysnatcher” hoped he could lure one of the Fab Four (Hagler, Sugar Ray Leonard, Thomas Hearns and Roberto Duran) into facing him, but to no avail.

“I don’t think; I know,” he said when asked if he felt he was avoided. “I made a big mistake. I went to train with Emanuel Steward, Thomas Hearns, Milton McCrory and all them guys. I fought Braxton, McCrory and sparred Thomas Hearns. They knew how good I was and didn’t want to fight me or spar me (afterward).” 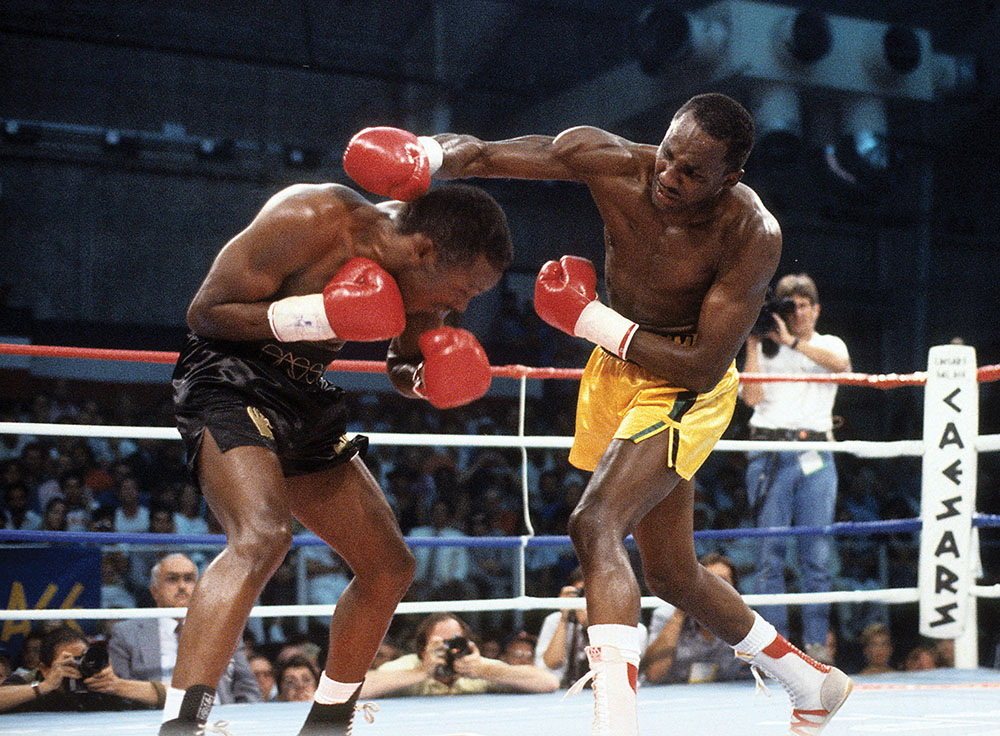 McCallum abdicated his throne and stepped up to middleweight, heading straight to Italy to face Sumbu Kalambay for the WBA crown in March 1988. Although McCallum was the pre-fight betting favorite, he was unable to get a handle on Kalambay, a stick-and-move specialist, and lost for the first time.

Undeterred, McCallum got back to winning while waiting for his next opportunity. It came when Kalambay was stripped for facing Michael Nunn over mandatory challenger Herol Graham, who instead faced McCallum for the vacant title. McCallum won a hard-fought split decision to become a two-weight titleholder. He then bested Steve Collins (UD 12) and knocked out Michael Watson before exacting revenge on Kalambay via split decision.

Attempting to gain the IBF middleweight title, McCallum fought rising star James Toney twice in the early 1990s, and although both fights were close, the 35-year-old veteran drew and lost a majority decision. McCallum became a three-weight titleholder when he edged Jeff Harding for the WBC light heavyweight belt in the summer of 1994 and made one successful defense before losing his title to Fabrice Tiozzo.

In his two final bouts, McCallum lost a unanimous decision to a prime Roy Jones Jr. as well as the rubber match against Toney before retiring at the age of 40. He walked away with a record of 49-5-1 (36 KOs). He was inducted into the International Boxing Hall of Fame in 2003.

McCallum, now 62, lives in Las Vegas, where he is a key figure in the training camp of rising lightweight star Devin Haney. Here’s what he had to say about six of his most memorable nights in the ring:

“I was upset I didn’t fight Duran, but now I’ve got to take care of business with Mannion. He didn’t look like much, but he was game. When I hit him with some good shots, he came right back; he tried his best to win, but I had too much stuff going on. I did everything in my power to win the title. Mannion was a good fighter. I tried to knock him out and I couldn’t. I controlled most of the fight and won most of the rounds. I would have been happy if I’d knocked him out, but I just wanted to win the title.

“You can’t imagine (what it was like to be) the first Jamaican world champion. That means everything to me. That was the best feeling to know that you are the first world champion boxer in Jamaica. We had some great fighters from Jamaica back in the day – Bunny Grant, Percy Hayles, Roy Goss – a lot of good fighters. I celebrated. I went all over Jamaica in a car – everybody was coming out, everybody wanted to see me. It was something else.”

“I didn’t know what to think. I knew he was a big puncher, but you don’t feel a punch like that. I wasn’t worried about his power; I was concerned about it – I didn’t want to get hit by it at all. I felt his power. ‘Oh yeah,’ I thought, ‘I have to get him before he gets me.’ So I hit him first. He hit me with a shot, and I felt it: ‘This boy can hit.’ When I hit him with a shot, he went down. I said, ‘You hit me so hard and you can’t take a shot? I’m going to get you now.’ He could give it, but he couldn’t take it. It was all over.”

“I think (my best weight class was) junior middleweight. It was a great fight. Donald Curry was the kind of guy … you sit and watch and you have your own vision; you talk to yourself: How could I beat him? What would I have to do to beat him? George Benton was a great trainer; he put it all together and told me what to do to win. Curry was a very sharp fighter. He punches sharp and crisp. He’s a very dangerous guy. He thinks a lot. He sets things up nicely. And I said, ‘I’ve got to beat him at his own game.’ He tries to set me up and I’m gonna set him up too. That was one of the best knockouts I ever had – it was a great knockout, a great fighter and a great fight. The last week of the workout, George Benton came to me and said, ‘He’s going to try to set you up with the right hand and jab; you’ve got to look out for them. He’s very quick and very accurate. You’ve got to do it this way and come back on top.’ I went over it one or two times, same combination. He said, ‘Remember, Mike, you’ve got to be alert because he’s very quick and accurate and he’s dangerous.’ So I slipped the jab and slipped his right hand, and I countered with a right uppercut and hook. That’s all it takes. That’s all I needed. I felt it in my hand.”

“England is a rough place to fight, especially when you’re fighting their man. They’re singing songs; they expect their man to win. I knew he was a very awkward fighter, a southpaw and gives all kinds of movement, so I hit him to the body to slow him down. (Graham was) not easy to fight at all. He was very good; he dodged punches good, very slick. Herol Graham was something else. He was hard to hit because he moves very well. He was unorthodox. It was a tough fight for me. I had to catch up with him, but I did catch up with him and I beat him.”

“The WBA wanted $30,000 plus a $35,000 exemption fee for fighting Toney. My lawyer, Milton Chwasky, was going to go along with that, but then they came back and demanded we give (Steve) Collins another $50,000 to step aside, and we said no. They wanted too much money. I didn’t know exactly what was going on. (Note: McCallum was stripped of the title.) I think I did enough to win the fight. It was a good fight, an old-school fight, very tough. I got off to a good start and he came back, and we went back and forth. The first fight was a close fight. He was young and strong and got better the second fight. He was a good fighter – three good fights. I think I won at least one or two fights. He was a throwback.”

“That fight was a great fight. I knew Jeff was a very hard fight to win – he keeps coming and he keeps punching. He’s got good stamina, very strong, so I knew it was gonna be a hell of a fight. I’ve got to box him. I can’t fight with him inside, ’cause he throws a lot of punches; he doesn’t stop punching. I can’t outwork him because he doesn’t stop punching. I asked myself, ‘How am I going to win this fight?’ I’ve got to do both: I’ve got to box him sometimes, I’ve got to work inside sometimes. I’ve got to turn him and counterpunch him. So that’s what I did. It meant everything to me – three-weight world champion. I was very happy about that. I worked hard. I trained hard for fights and I tried hard to win fights. I don’t like to lose. I work hard all the time for fights, especially the championship fights. Those ones mean everything to me.”