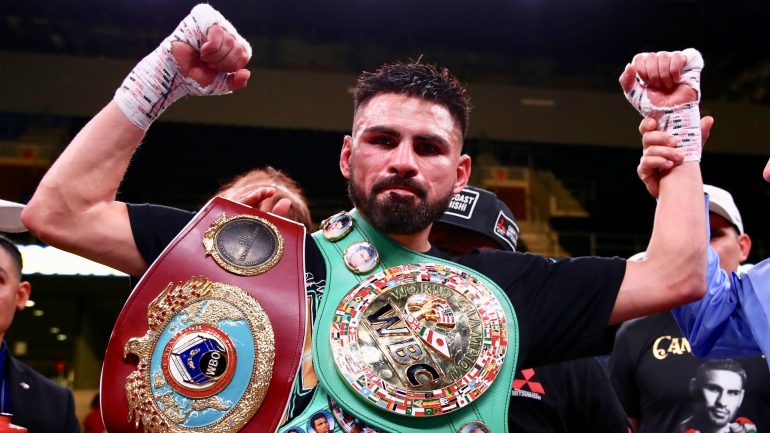 It has been almost nine months since Jose Ramirez stopped Maurice Hooker, becoming a unified titleholder. Rather than prepare for a unification fight against Josh Taylor or another prominent fighter, the undefeated junior welterweight has dealt with two fight postponements due to the COVID-19 pandemic that has affected world affairs, including sports.

Ramirez is eager to not only get back to training, but to also fulfill his mandatory against Viktor Postol and, should he be victorious, set himself up to face Taylor in a unification fight or possibly move up in weight and face the likes of unbeaten Terence Crawford.

In the meantime, Ramirez is abiding by California’s ’Stay at Home’ orders, self-quarantining in his hometown of Avenal, not far from Fresno, which is located in the San Joaquin Valley.

Ramirez (25-0, 17 knockouts), who is ranked No. 1 at 140 pounds by The Ring, was originally scheduled to defend his WBC/ WBO titles against Postol on February 2 in Hainan, China (February 1 in the United States, but the fight was postponed. The fight moved stateside to the Save Mart Center in Fresno, where Ramirez has fought several times, but Top Rank made an announcement on Mar. 30 that the fight was again postponed.

Top Rank did announce the fight would take place at the Save Mart Center later this year when boxing would be allowed to resume.

Ramirez, who started training for the Postol fight back in November, is grateful for the time he is spending with his family, but has felt frustrated in recent weeks.

“Me having my boy, I want to spend as much time with him now that he’s getting older by the second,” Ramirez told Crystina Poncher in an online interview last week. “It’s hard. I had a plan for 2020, just like any other fighter. I had a plan to fight three times. I was happy that I was going to start early and hopefully move to the (welterweight) division next year. It throws me off. It sets me back. Everything happens for a reason, I believe. Right now, we just have to stay safe. We have to go through this crisis.”

“I’m just staying focused. I’m staying optimistic with everything, with doctors, with everyone, the first responders. I think everyone is working hard to get together to go through this fast and get everything back to normal. Right now, I believe this is something that requires everyone to be on the same page, to really practice (self-isolation) so we can stop the spread of this virus. I do know that my fight will be one of the first fights back when all this is over.”

Ramirez, who is trained by Robert Garcia in Riverside, California, has been vocal about facing Taylor in a unification fight. Taylor owns The Ring Magazine belt, along with the IBF and WBA titles.

Despite not having had any problems making the junior welterweight limit, there is the possibility of Ramirez moving up in weight to face Crawford, which he is open to. After the Postol fight, Ramirez’s sights are set only on a unification fight with Taylor.

“I owe it to myself to fight for all the belts just because if I were to go up to the next weight class, people will still doubt who the best 140-pounder is, just because there is another guy with two belts,” said Ramirez, who won the vacant WBC title with a win over Amir Imam in March 2018.

“There are some other fighters that I didn’t get to face at 140. I really want to prove a lot of people wrong. I want to do it for myself. I know I can be the best 140 in the world. I know I can see myself with all four belts. It’s just a matter of time, and once I do that, I think that’s going to put my name more out there worldwide. It’s going to definitely make a stronger impact when I do move to 147 knowing that the undisputed champion at 140 is moving up to 147. I think that’s going to make more noise.”

“I’ll take any route that leads me to fight for a world title. Crawford is an excellent fighter, so yeah, I would definitely be honored to share the ring with him. I think I’ll show him something new. I think I’ll bring something out of him. By the time I do make that decision to move to 147 and put that extra muscle on me, on my body, I’ll be a much stronger Jose Ramirez. I can see myself developing into a better welterweight than super lightweight. I do have the height. I do have the body frame. I think once I put the extra seven pounds on, it’s going to be a huge difference in a very positive way.”

Even a fight against hard-hitting Regis Prograis, whether at 140 or 147 pounds, interests Ramirez.

“I think if the fight with Regis takes place, it might take place at 147, though, because I have fights lined up (art 140 pounds). I really want to move up after that.”