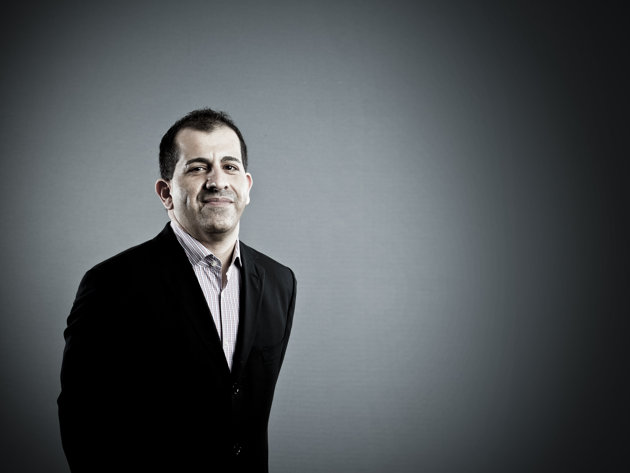 Stephen Espinoza has re-introduced himself to different areas of his Manhattan home. He may never get annoyed again the next time he’s waiting in line at an airport. None of us may. The simple, mundane irritations that crept into our daily lives seem almost welcome today after being taken away by the COVID-19 pandemic.

Like the rest of the world, Espinoza, the Showtime president of sports and event programming has self-quarantined, part of America’s new lexicon, along with “social distancing,” in the new COVID-19 pandemic universe that we currently reside.

Like the rest of the world, Espinoza finds himself in a real-life science-fiction movie, with face masks and disposable gloves, while juggling myriad scheduling issues and assignments running a major cable network from his phone and home computer.

Like the rest of the sports world, Espinoza is in a holding pattern while the worldwide pandemic is being dealt with. Though, it doesn’t mean Espinoza nor Showtime is willing to wait on hold.

Showtime is planning on showing (see accompanying story) Ring Magazine/BWAA Fight of the Year winners, starting this Friday, April 10, with arguably the best fight of the century, Diego Corrales vs. Jose Luis Castillo I, on May 7, 2005, followed on successive Fridays on Showtime by Paulie Ayala vs. Johnny Tapia I on April 17 and Lucas Matthysse vs. John Molina on April 24.

“I want everything to get back to normal, I want my NFL, the NBA, boxing, but that’s not wise right now,” said Espinoza, one of the most powerful figures in boxing. “There is a lot more household organizing getting done that might not be getting done otherwise. It’s an interesting point that when something gets taken away, you appreciate it more, like going to work and interacting with other people.

“We all pull our hair out over sports over and over again, and it would be nice to get back to that silliness that sports brings. Like everything else, it is more valued and appreciated than it was six weeks ago. The ability to have a shared experience is something we all miss. Whether it be an NFL game, or an NBA game, or a big fight in Vegas, or being able to talk to your buddy about a Nets game or a Mets game. Just the ability to have shared experiences is something we never gave a whole lot of thought to before, and now I realize that it’s something really valuable.

“You realize how much your freedom to travel and move around is a privilege.”

On Wednesday night, March 11, Espinoza was sitting in a Manhattan restaurant when he looked up and saw the unprecedented events unfold before his eyes, hearing the news that Utah Jazz All-Star center Rudy Gobert had tested positive for the coronavirus, and Oklahoma City Thunder players were being pulled off the court before their game against Utah.

The next few hours there was a torrent of news about the coronavirus.

On Friday, March 13, Showtime executives told their employees not to show up at their Manhattan office.

Soon after, the pandemic ran roughshod over the rest of the sports world, cancelling everything. The California and Nevada state commissions cancelled events months in advance. April and May were shot, with the possibility of June opening some dates.

Espinoza’s primary concern was the safety of his people and those around him. It was far more paramount than setting up fights.

“In the grand scheme of things, for as much as we love sports and love boxing, there are more important things going on here,” Espinoza said. “We’re trying to prevent the spread of something that could be catastrophic is allowed to spread unchecked. Is it frustrating, is it aggravating, is it disconcerting, yes, it is. But the reality is we as members of society owe it to each other to not make selfish choices and say ‘I’m running to the gym,’ or ‘I’ll run my boxing events come hell or high water.’

“Those decisions have repercussions on entire communities.”

Espinoza said this current situation compares to the 9-11 tragedy. He was actually supposed to attend the Bernard Hopkins-Felix Trinidad fight on its original date, September 15, 2001. He still managed to make it to the rescheduled date on September 29, seeing firsthand the devastation of 9-11.

He fills his days mostly on the phone, tightening production, looking at the possibility of holding events without crowds.

“In order to do that, there are a bunch of preliminary steps and assumptions that have to be met, like easy access to testing, making sure that you’re not spreading the virus, and you have to have medical resources in ambulances available,” Espinoza said. “These things all have to be factored in. With New York City being at the epicenter right now, if you said, ‘Hey, let’s hold a fight at Barclays Center, with two ambulances for the six or seven hours that the show goes on,’ there’s no chance of that. Nor, should there be.

“There are better uses for ambulances right now in New York City than waiting at a boxing event, waiting for something to happen. Obviously, every state is different. But you have ringside doctors, hundreds, thousands of people taking tests, to ensure safety. That’s something as a whole that society will be grappling with.”

Espinoza is being patient, while the rest of the sports world chomps at any morsel that becomes public, from NBA games of H-O-R-S-E, to Major League Baseball tripleheaders in Arizona heat, to National Hockey League tournament-type games in North Dakota. He knows fighters, many of whom don’t have access to training facilities, will need time to get in shape. So, he doesn’t see boxing coming back before July.

“As impatient as we all are, if we rush back into this thing, just for the sake of getting back to normal, there’s more at stake here than missing a few fights and people being bored at home,” Espinoza stressed. “There is somewhere around 150 people (in behind-the-scenes production staff) for a major pay-per-view level fight that’s involved, and preparation for the fighters is important, with their corner people and their families. It is a tough problem to solve.

“As long as you allow people to intermingle, it’s impossible to provide any measure of safety. You’re talking training camps, sparring partners, anyone at the event, like state commissions, ring workers, the promotion staff, the Showtime staff, there are a lot of people involved in these productions. There are a lot of challenges.”

Espinoza stated that he may be open to holding boxing events in empty arenas for a period of time.

“It will be a little strange at first, but we’re planning on that and looking at options,” he said. “We’re looking to keep the risk down as much as possible.

“The reality is no one knows anything yet.”