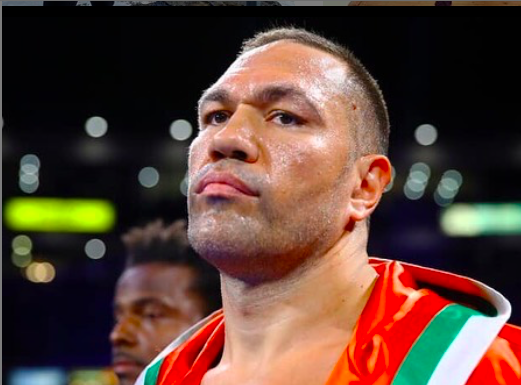 By and large, it feels like most people have been fairly responsible, understanding the gravity of the problems that coronavirus presents. You really haven’t recently been hearing too much of “the show must go on” chatter.

But word is that New York, the American epicenter for coronavirus infections, could soon be past its peak, and that Dana White is pushing forward with UFC 249 (April 18), and Major League Baseball is thinking about doing a season, with all games to be played in Arizona. Thus, there is a groundswell growing that, with a smart plan, and a safety-first mentality, a version of the show should go on.

Bulgarian Kubrat Pulev (28-1, age 38) had been training for the opportunity of his fighting life, a challenge against multi-belted heavyweight ace Anthony Joshua, in England. That scrap was to unfold on June 20, but was announced as postponed, as the UK started seeing more cases of COVID-19. And that sector of the world is still in react mode, the Prime Minister Boris Johnson is right now battling the respiratory mugger in an ICU. 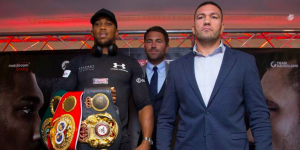 It’s not unwise, maybe, for Team Pulev to stay on this matter. Hearn is an ultra capitalist, and would he look to come out of coronavirus with a change of plans?

But the world keeps turning, even if its on a tilted axis. And money makes the damn thing turn, still, and money isn’t generated in a vacuum. In the sports entertainment business, the sports have to occur, the fights have to take place, the games have to play out. Replays can keep people from being bored out of their skulls but new content has to be fashioned, to keep the revenue streams aflow.

Pulev and his co-promoters, Ivaylo Gotzev and John Wirt with Epic Sports & Entertainment are keen to get a plan cooking to get the Joshua-Pulev bout re-set. Word dropped on April 3 that the IBF’s No. 1 rated Pulev would have to wait, because coronavirus was too vicious a scourge. Joshua’s guy Eddie Hearn said that we’d have to see how things play out for the event that was to take place in London.

“I know (promoter) Eddie Hearn has questioned Dana White’s plans to promote UFC events now during this pandemic,” said Ivaylo Gotzev, CEO of Epic Sports in a release that went out Monday night, “but throughout the last hundred years, boxing has been a refuge from some of the biggest challenges our world has ever seen. Throughout the Great Depression, two World Wars, even the tragedy of September 11th, boxing has been first to capture the hearts, minds and the imagination of the public when they needed it most. Therefore Joshua vs Pulev must go on!”

During the postponement announcement, Hearn said he was hopeful the defense would take place “at the end of the summer.” 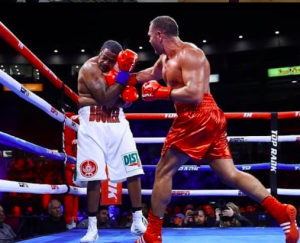 Pulev got some work in against Rydell Booker in November. He’s asked Joe Goossen to come aboard to get as sharp as can be for AJ.

John Wirt, president of Epic Sports, pointed out that WWE has kept the machine rumbling, at reduced capacity. Wrestlemania 36 took place, and was shown on April 4 (part 1) and April 5 (part 2). Matches took place in Orlando, Florida, at a WWE facility, in front of only essential personnel. “People need entertainment, and sports specifically, while being cooped up inside for this long,” Wirt continued. “You can catch a fever from Covid-19, but you can also get a bad case of Cabin Fever if you don’t take care of your mental health. Just like Netflix, sports is an essential service because we help keep people from worrying themselves sick over this virus.”

Gotzev added more points to his lobbying blitz. “A 15-minute rapid test is now readily available and soon antibody testing and certification will exist,” he said. “While it is clearly not practical to test 70,000 fans coming into a stadium, testing the hundred or so persons required for the first class television production of a world heavyweight championship fight with no live audience is now well within the realm of possibility.”

“As I have said repeatedly, I’m ready to battle, anytime and anyplace,” said Pulev. “So, come on AJ, let’s make this historic fight happen for the world and give our fans a battle they will never forget!” 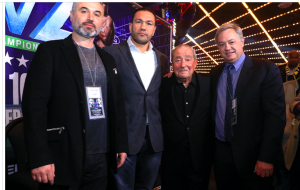 I messaged Gotzev Monday, after I saw the release.

Has he talked about some specific plans for a reset, along the lines of what was laid out in the release?

“I have talked to Eddie Hearn,” Gotzev said. “We had a long discussion. There is a good chance of that happening.”

Late July, he said, would a good time for the re-set face-off.

MY THREE CENTS: Gotzev and Wirt are wise, piping up. If they are quiet and just let things play out, who knows, they could find that plans changed because of discussions they weren’t involved in.