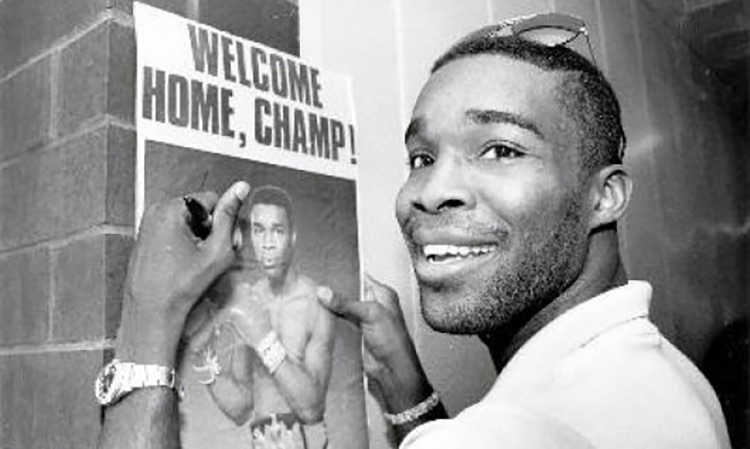 Schools and businesses are closed as are houses of worship and gymnasiums, beaches, even some city parks. 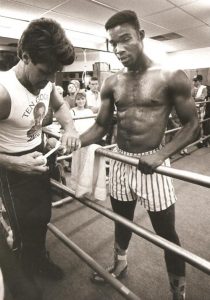 Michael Nunn and former trainer Joe Goossen in the gym in 1987.

Such isolation may be new to most but not to former middleweight and super middleweight champion Michael “Second To” Nunn. He is kind of an expert on the topic. He walked free of federal prison after serving 16 years and six weeks and described jail lockdowns in detail to The Ring.

“I called where I was ‘penitentiary plantations.’  I seen it all, and now I am loving my freedom and my five children and nine grandchildren since getting out on February 6. One thing all that jail time taught me was patience.

“Right now, being out in the world is crazy too but not as crazy as prison. This virus hits anybody, even pro athletes with $200 million deals. This virus doesn’t discriminate. It doesn’t care if you are rich or poor or black of white,” the 56-year-old who is back in hometown Davenport, Iowa, said.

Nunn said lockdown conditions are normally put in place when there is an inmate riot or other serious violence. When a convict has a known, communicable disease, he is placed in some confined space.

“Wardens worry about being sued so they move quickly in such cases, Nunn said.

Prison being the opposite of a democracy, lockdown rules are stringent and can last for weeks or months.

“They stop your mail, your phone calls, they limit shower time and you can’t have any visitors. Everything comes to a stop, especially when an inmate is stabbed or killed. I went to a prison in Texas where everyone had been on lockdown for five or six weeks due to a Mexican gang war. It was the Mexican Mafia and some rivals.”

Nunn himself was nearly falsely implicated as having gang ties.

“Some guy was a boxing fan and wanted a photo with me. Turns out he was a Gangsters Disciple out of Chicago. They sent the photo to Washington and were starting a gang file on me, but the guy said I wasn’t gang affiliated and they dropped it,” Nunn said. “I didn’t take any more photos with anyone inside. “

Serving time meant killing a lot of hours so I asked Nunn how he occupied himself.

“One guy began teaching me how to play chess but then he got transferred. I did play a lot of dominoes and I read a lot, positive subjects such as sports or business topics mainly. You try to stay busy.”

It took a two-point sentence reduction on his drug sale (to an undercover) to allow Nunn to come home when he did. Otherwise, he would still be in the cooler awaiting a December 2024 release date.

In the meantime, and in-between time, Nunn advises keeping a cool head during the public health emergency.

“A voluntary lockdown is no big deal. It’s nothing like a real prison lockdown. We can, we will knock this virus out,” Nunn said.