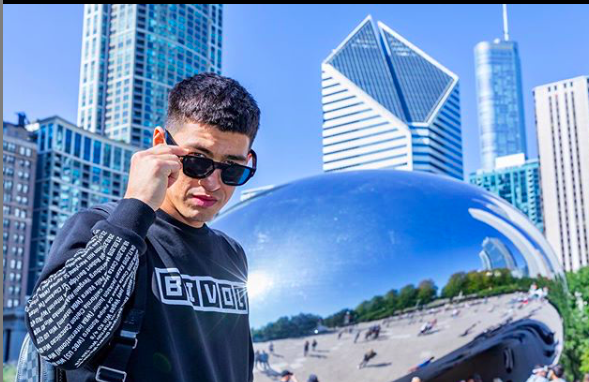 Although it’s not likely to happen any time soon, WBA light heavyweight world title holder Dmitry Bivol has once again called out Saul “Canelo” Álvarez for a showdown at 168-pounds.

“I’ve said now for over a year that I’m ready, willing and able to move down to super middleweight and fight Canelo,” said Bivol. “I have been training throughout the COVID-19 crisis and have watched on social media that Canelo has as well.”

Bivol (17-0, 11 KOs), who splits his time between Saint Petersburg, Russia and Los Angeles, won a piece of the 175-pound championship in only his twelfth professional fight in 2017. He has since defended his title five times, but has failed to lure any big names to get in the ring with him. In his last outing, he beat Lenin Castillo, in October 2019.

Meanwhile, Álvarez (53-1-2, 36KOs) knocked out Bivol’s countryman, Sergey Kovalev, in his most recent bout last November. Although that fight was for another piece of the light heavyweight title, most still view Canelo, who currently holds The Ring championship at 160-pounds, as a middleweight. Is it possible a Canelo-Bivol fight could be made if they met in the middle at 168?

“I know that my team and Golden Boy Promotions have discussed this option and we are willing to make the fight on very reasonable financial terms,” said Bivol. “My team understands that unlike many other opponents, my goal is not the payday but to face the best in boxing today. I know I can beat him and the real rewards will come after this fight.”

Vadim Kornilov, Bivol’s manager, echoed his sentiments. “We are willing to work out a much more reasonable deal than what was paid to Canelo’s recent opponents to make this fight. For Dmitry it’s more about the opportunity to dethrone one of the very best fighters in the world.”

“I have heard that DAZN and all other parties involved are supportive of this fight, but whenever the name is brought up to Canelo, he says he would never do it,” he said. “It would be great to know if he is ready to fight other top champions in his division that are on the same network and are ready to make a simple and appropriate deal as there are not that many of them. I strongly believe that Dmitry Bivol at Super Middleweight is the toughest test for Canelo.” 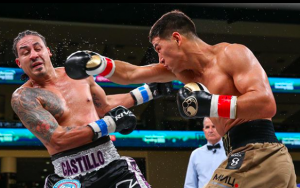 Bivol has scored three straight decision wins, including his last, versus Castillo. He’s an excellent technician, but buzz with him is muted, because he’s not a life taker.

Bivol has long been promoted by World of Boxing, and signed co-promotional deal with Matchroom Boxing last year. Andrei Ryabinsky, head of World of Boxing, is very confident that his fighter will eventually face the Mexico’s most famous redhead.

“Dmitry wants to fight the best and Canelo is all the way at the top of that list right now. This fight will have to happen sooner or later, the fans want to see a fight where Canelo will really be tested.”

Both Álvarez and Bivol fought on HBO in recent years before moving over the sports streaming service DAZN. In an age where network alliances often put the kibosh on potential match-ups, that is certainly no issue here. Yet while Team Bivol is desperate for a big name opponent, there are seemingly limitless options for Canelo from middleweight to light heavyweight.

A deal for Canelo to face current super middleweight title holder Billy Joe Saunders on May 2 was nearly finished before the COVID-19 pandemic put the boxing schedule on hold. Callum Smith, another top 168-pounder from the UK, was in contention as well. A third fight with middleweight rival Gennadiy Golovkin has been rumored for the fall. There has even been talks of facing Japan’s Ryota Murata in Tokyo down the line.

Unfortunately for Bivol, that leaves him on the outside looking in. But rather than finger pointing or simply sitting around waiting for an opportunity, he’s doing the right thing, staying in the gym and calling out the best. What more could fans ask of a fighter?