Re-start engine of speculation, what Teofimo Lopez v Vasiliy Lomachenko will look like 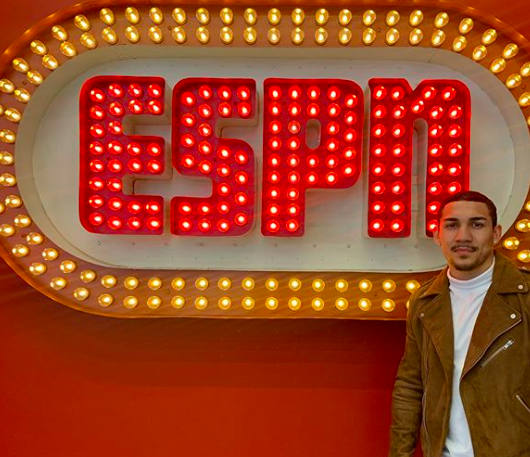 The picture is painted by Mark Kriegel and you can picture the kid, in a cramped closet, holding the mattress up over the heads of his loved ones, in Arkansas, as a tornado takes its time doing a violent massage on Jonesboro.

This, this is maybe how I’m gonna go, with a mattress in hand?

Teofimo Lopez had seen it coming, after he and the missus had jetted with their three pups to her family’s, in AK. He could pick out the objects swirling in the tornado, and damned if it didn’t make a portent-of-doom sound that more than rivaled anything the 15-0 hitter has seen in a ring. 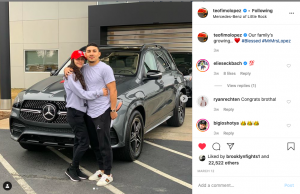 The happy couple are revved up about the news of an impending arrival. (Photo off Lopez Instagram)

Then, time passed, the rotating cone passed, and Lopez got back to worrying about more regular stuff. Like this global pandemic that’s playing out, and the fact that he’s home bound, and not working out as much as he’s used to, because of a tweaked back.

The 22 year old would have been working himself into more primo condition at camp– back in NY, he lives in Bushwick, Brooklyn, a hot/hipster/but still gritty-ish section of the borough of kings, if not for COVID-19.

Kriegel was kind enough to take some time, talk about the piece, on the latest edition of the Everlast TALKBOX pod out today (Tuesday). The CA resident said that like everyone else, he’s affected by coronavirus to a degree, or another. His parents live in NYC, or, as people from there call it, “The City.”

We spent ample time on the tornado tale, and where the wind will blow boxing, and this fight that was going to unfold on May 30, if not for fate raising her hand and saying, Nah, I got a test for y’all.

In the Kriegel piece, we learn that Lopez is still amped to have this unification at 135 pounds with Vasiliy Lomachenko, even though he was walking around at middleweight. “No, I’ll make it,” he said to Kriegel. “This fight is going to happen.”

Who knows when? Maybe Bob Arum of Top Rank knows a bit better today than he did yesterday. With word that NY may be at their plateau of coronavirus cases, even though other sections of the nation have plenty of pain to come, that is giving some breathing room to executives. President Trump during his Monday briefing said he thinks people are tried of watching old games, replays, and want fresh content. Dana White said today he’s about to book a private island and stage UFC 249. Yes, people are doing more than dreaming about getting back to work, they are finding platforms to stage events, even if the events for a spell won’t be in front of paying customers slurping beers and waving foam fingers and spitting microscopic globules of spittle down on that guy in Row 14, seat 12.

So, Lopez knows that it’s wise to get more toward ready, so he doesn’t have to spend excess time in camp carving.

Kriegel sounded almost as pumped as he can be about this fight, which has many of the elements that get his interest level toward 10. 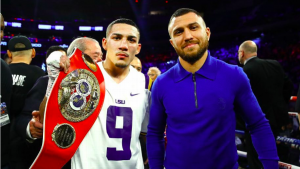 Lopez turns 23 in July, Loma turned 32 in February, but has wear on his treads from a prolific amateur stint. You like youth to better the more seasoned when this one gets re-set? (Mikey Williams photo for Top Rank)

Yep, the fathers, that’s a part of it. The relationships between the dad and the offspring, the lack of one, the paths walked in tandem, the shadows which loom in the minds of the fathers and sometimes over-spill and mess with the kids’ heads, Kriegel sees through that filter 20/20….

Loma’s father/trainer, reserved, silent actually, to most outside the tight sphere, a scientist sort who almost in total lets his work speak through the actions of the son. And Teo’s father/trainer, a former street fight vet who sounds like he’d volunteer to drop some pounds and fight Loma himself if the son’s back crapped out.

And regarding that angle, those varying dynamics and how they might influence the result when the young gun and the older one do a supremacy test….

Top Rank sent out a release on Monday, quotes from Loma, from his chat with Crystina Poncher.

Off the top, coronavirus forced a lockdown in Ukraine, and people are getting fined for violating regulations. Loma told Poncher that quarantine their should be lifted April 24. As for fighting, yep, he’s seemingly amped to get back to work.

“I really think he’s a good boxer,” said Loma, through manager/translator Egis Klimas, when asked if he thinks Teofimo is ready for the topmost elite. “He’s a top fighter. He’s young, he’s hungry, he has big power, and I want this fight. He’s a world champion, and he holds my belt. It’s IBF title.”

Then, the money quote, for me: What makes the matchup with Lopez, that cocky young ‘un, interesting, Vasily? “The interesting thing for me, it will be to look into his eyes and his father’s eyes and see their reaction {after the fight}.”

Read the Kriegel piece, he spoke some on what had held up the May 30 bout being announced.

My three cents: I think it’s safe to start your engines of speculation, on how this one could unfold, AC (After Coronavirus). You maybe thought Lopez would prove that Loma really is better suited for 130? But now, and knowing that Teofimo said this would be his last one at 135, what if his body composition has changed, and getting down to 135 proves more draining than you’d assumed when you pondered this fight back in January? Talk to me–when this bout gets re-settled, who wins Lomachenko vs Lopez, and how?