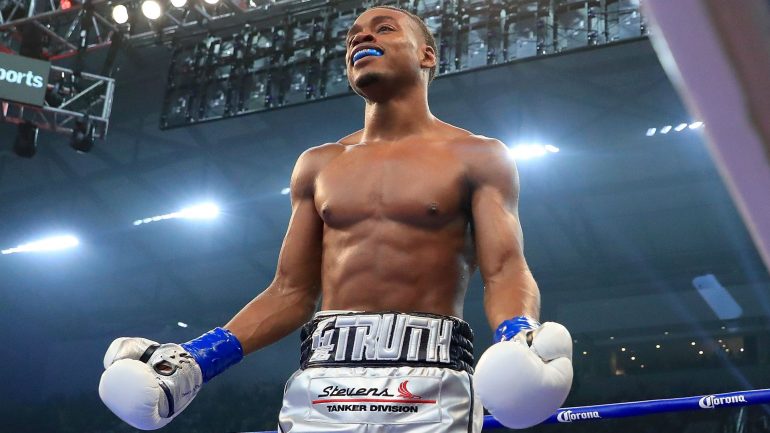 Unified welterweight titlist Errol Spence said Monday he is hoping to return to the ring by September or October and wants to fight either Manny Pacquiao or Terence Crawford.

Spence, 29, has not fought since outpointing Shawn Porter last September to unify two belts. However, a little over a week after the bout, he was involved in a horrendous, one-car accident on Oct. 10 when he crashed his Ferrari at a high rate of speed in Dallas. He was not wearing a seatbelt when he was ejected from the car, which flipped several times. He was subsequently charged with DWI and was sentenced to probation.

Spence reiterated that he has unfinished business before thinking about moving up in weight.

“My goal is to be undisputed welterweight champion of the world, so I have to fight (Pacquiao) to get one of those belts, unless he vacates or something like that, or somebody else beats him. It’s a fight I would love to have,” added Spence.

There have been rumblings about a potential Pacquiao-Spence mega fight to take place around January 2021 at AT&T Stadium in Arlington, Texas, the home of the Dallas Cowboys. Spence, a native of nearby Desoto, would like nothing more than to fight Pacquiao in front of his hometown supporters.

Spence is also willing to face fellow unbeaten welterweight titleholder Terence Crawford. As bad as he wants to fight him, Spence understands that it has to make financial sense before they face off in the ring.

“It’s big, it just has to make sense,” said Spence, “Just like Pacquiao and Floyd (Mayweather), it has to be all the money in the pot and everybody has to get their fair share. So as long as it makes sense money-wise, if it’s big enough, then I think the fight will happen.

“You’ve got to pay us our worth, because me and Terence are going to get in there and try to kill each other.”

Spence assured that the fight will eventually happen.

But Spence says Crawford doesn’t stand a chance against him.