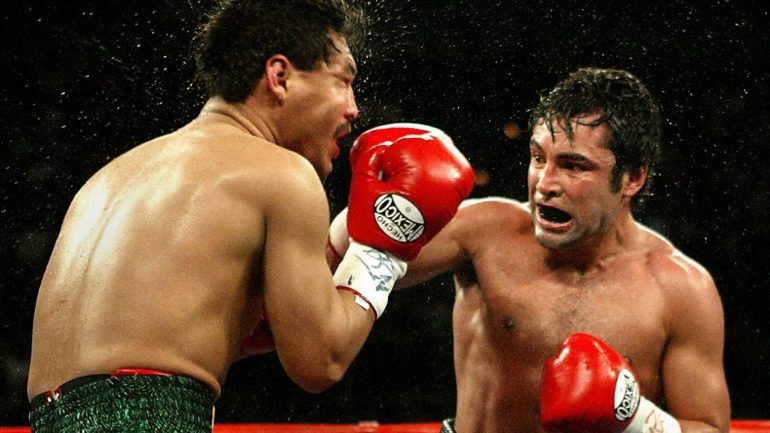 Editor’s Note: This feature originally appeared in the October 2018 issue of The Ring Magazine.

His amateur career was also a brilliant success, which isn’t too surprising given that he was born into a boxing family and took up the sport at 6 years old. His grandfather, father and older brother Joel all boxed to varying degrees.

De La Hoya won a slew of national amateur championships en route to earning a berth on the 1992 U.S Olympic team, and won America’s only boxing gold medal at the Barcelona Games.

For all his accolades, it is that medal he most cherishes.

“Nobody can ever take that away,” De La Hoya told The Ring. “I’ve won many world titles and I’ve fought the very best in the world, but the Olympic gold medal is by far my prize possession.

“(This is because of) the pressure I had going into (the gold medal fight, and I was) doing it for my mother – she had just passed a few months before.”

He decided to make the transition to the professional ranks after going 223-5 as an amateur. His services were courted by Top Rank promoter Bob Arum, who quickly brokered a deal.

“The Golden Boy” won the then-lightly regarded WBO 130-pound strap against Jimmi Bredahl in just his 12th fight and never looked back.

De La Hoya moved up to lightweight and won the WBO title, then added the IBF belt by demolishing Rafael Ruelas in two rounds. Wins over the likes of John John Molina (UD), Genaro Hernandez (TKO 6) and Jesse James Leija (TKO 2) proved to hardcore fans and media that the burgeoning star was for real. De La Hoya, who beat those four seasoned contenders in 1995, earned The Ring’s Fighter of the Year award.

By the summer of 1996, he had moved up to junior welterweight and challenged the legendary Julio Cesar Chavez for the WBC 140-pound belt.

“It was a double-edged sword, to have to fight my hero and beat him the way I did,” De La Hoya said of his four-round victory. “It was a sad moment in my life, but a happy moment.” 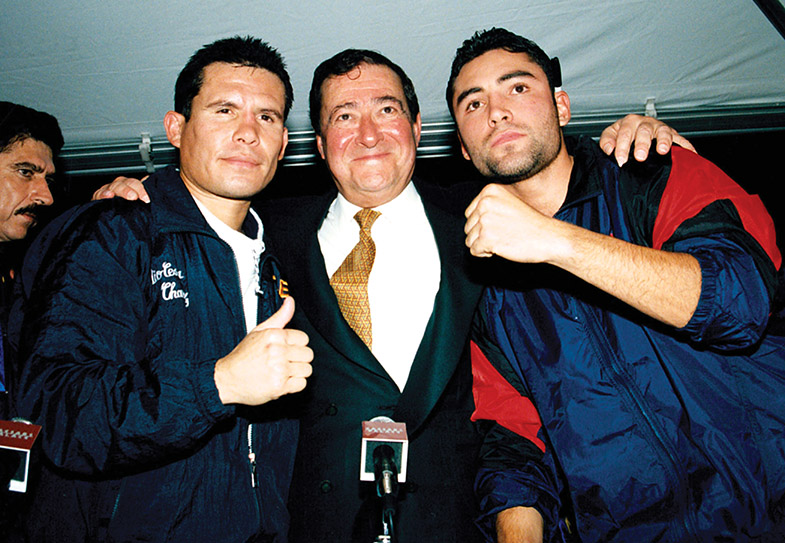 Over the next two years, De La Hoya outpointed then-unbeaten (41-0) Miguel Angel Gonzalez in his final bout at 140 pounds, then moved to welterweight to edge past the supremely skilled Pernell Whitaker in a fight for the WBC belt and pound-for-pound supremacy. He defended his 147-pound title with a decision over wily veteran Hector Camacho and a stoppage of Chavez in a rematch.

“For the second fight, he came and fought,” he said of the return bout with his boyhood idol. “(Chavez) actually wobbled me, but I didn’t show it.”

De La Hoya fought unbeaten welterweight standout Ike Quartey to a standstill in a thrilling encounter in February 1999. Both men were on the canvas in a frenzied sixth frame, only for De La Hoya to seal the victory with a final-round knockdown.

“I beat him the first eight, nine rounds, and then the last three rounds I boxed him,” De La Hoya said. “In those times, when you boxed a little they called it running; now if you box, they call it beautiful. (laughs) That’s one fight I wish I would have had again.”

His next big fight came against crosstown rival Shane Mosley. A second-half surge during a close and competitive fight saw Mosley win a split decision.

De La Hoya wasn’t done with the sport, however, and stepped up to junior middleweight to widely outpoint rugged WBC beltholder Javier Castillejo. He then unified the WBC and WBA titles against Fernando Vargas in an exciting encounter, stopping his bitter rival in the penultimate round of their grudge match. 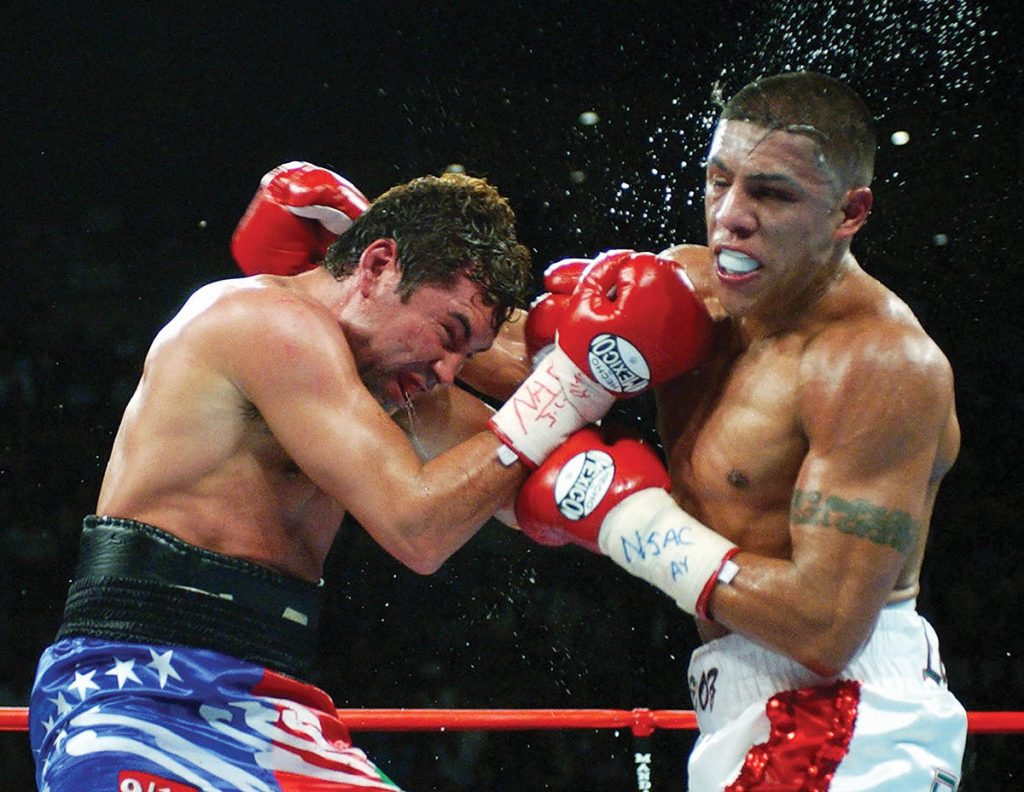 Mosley relieved him of his titles in controversial fashion, and De La Hoya once again moved up in weight. This time, Lady Luck favored him as he narrowly outpointed Felix Sturm to complete his goal of winning world titles in six weight classes.

That win set up a fight with Bernard Hopkins for the undisputed middleweight championship. De La Hoya boxed well and the fight was a close, tactical battle until Hopkins landed a debilitating body shot in the ninth round to bring proceedings to a close.

Shortly afterward, he retired in December 2008 and was inducted into the International Boxing Hall of Fame in his first year of eligibility in 2014.

At one time, De La Hoya held the record for most pay-per-view revenue generated, totalling 13.85 million buys and grossing $680.6 million.

De La Hoya, now 45, lives in Los Angeles and runs Golden Boy Promotions, which he founded in 2002. Away from boxing, he enjoys playing golf and owns a stake in Major League Soccer team Houston Dynamo, among other investments.

IKE QUARTEY: By far, Ike Quartey. Not only was it powerful, it was very consistent.

PERNELL WHITAKER: It would have to be a coin flip between Pernell Whitaker and Mayweather. Both had different styles. Whitaker used his waist more and stood in front of you and was very slippery. Mayweather was more of a boxer that moved just a little bit more. The most difficult to hit was probably Whitaker.

FLOYD MAYWEATHER JR.: I think (Floyd) Mayweather used the ring really well. He had good footwork – that’s what starts it all. The anticipation of knowing when you’re going to attack was a big part of his defense, which made him very clever.

SHANE MOSLEY: It was “Sugar” Shane Mosley in the first fight. He had amazing hand speed. With him it was just the speed behind his punches; even though you can see them coming, there were so many – and very accurate and great power. A fighter like Pacquiao, he’s fast as well. He throws a lot of punches from different angles and you get hit because you don’t know where they’re coming from. With Mayweather, he’s fast too, but his speed is more about timing. It’s not like “Sugar” Shane Mosley with four- and five-punch combinations. Mayweather is more like you throw a jab and he’ll counter it. That’s his speed. I think Shane Mosley in his prime was the fastest fighter I’ve met.

FERNANDO VARGAS: I would have to say Fernando Vargas. He was very big and strong. We all know what happened after that fight (Vargas tested positive for steroids), but he was very powerful. I was almost knocked out of the ropes in the first round. He was a strong son of a gun. His anger is what fueled him.

FLOYD MAYWEATHER JR.: I think the fact he knew how to anticipate my punches made him smart, made him win the fight.

JULIO CESAR CHAVEZ: I hit him with some good shots and he still wouldn’t go down. He had one of the best chins in the world, ever. Very resilient. He still is my hero.

QUARTEY: His punches were like bricks; he hit me and it would sting me. Every punch he would hit me with, it would rattle me.

WHITAKER: Whitaker had to be one of the most skillful fighters in any generation – the fact he could stay right in front of you and could still slip the punches. Whitaker wasn’t a runner; he was just someone who stood right in front of you and knew how to slip. Whitaker knew how to knock you out, too. Punching power, skill, I.Q. – Whitaker had it all. He’s probably one of the all-around best boxers I faced.

MANNY PACQUIAO: I would have to say Pacquiao. I think his determination, his conditioning, his skill, his power, speed, footwork … he’s one of the fighters I most appreciated. Mayweather-Pacquiao would have been a lot different (if they’d fought) in their primes. Pacquiao would have beat (Mayweather) easy, absolutely.