Golden Boy’s Eric Gomez: ‘We are taking it one day at a time’ 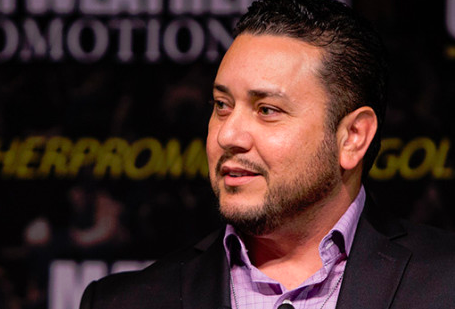 Golden Boy Promotions president Eric Gomez considers himself an optimist but admits the current COVID-19 crisis has even him questioning when we will see the light at the end of this dark tunnel.

In addition to a slew of postponed cards and uncertainly about the future, Gomez is very focused on keeping his immediate family and staff at Golden Boy safe.

“It seems every day there is news, so we are paying close attention,” Gomez told The RING from his Los Angeles home. “The past two weeks there has not been good news and it keeps getting worse and worse but there has to be a turning point and it can come at any time. It can come tomorrow.”

On Wednesday, California Governor Gavin Newsom said schools in the state will remain closed for the remainder of the school year and the Department of Labor reported on Thursday that a record 6.65 Americans filed for unemployment last week as a result of the COVID-19 pandemic doubling the previous week’s total. Boxing seems to be the furthest thing on everyone’s mind.

“I really feel for the fighters who are our clients and depend on us,” Gomez said. “I also have a dedicated staff here at Golden Boy, some of whom have been with us for 15 years. These are men and women with families. We are trying to remain positive and optimistic but there is so much uncertainty. All we can do for now is to follow guidelines that the President has set and the governor has set and we have to hope for the best. But when the constraints will be lifted I promise Golden Boy will be ready to go. Our fighters are still working out and remain motivated and they will be ready to go.”

Gomez said while his team is chomping at the bit to get back to business, the priority remains to keep everyone safe and continue following the rules, which makes producing events behind closed doors without fans difficult.

“We will look at anything and everything, but everyone was told to not congregate in groups of more than 10 people so we will follow the guidelines that are set forth for everyone,” Gomez said.

Gomez brings up a good point–one upside to this delay could be fighters understanding that tomorrow isn’t a given. Make those must see fights now!

“Whatever we decide to do has to make sense for everyone, involved including our partners at DAZN and our fighters. I am in constant communication with the athletic commissions all over the country including California, Texas and Nevada and everything is at a standstill right now. There are so many questions and not enough answers.”

In all the uncertainty and fear of the unknown, Gomez hopes fighters start looking at their careers differently, because tomorrow’s fight is not guaranteed.

“This might make the fighter strike while the iron is hot as opposed to waiting for tomorrow because tomorrow may never come,” Gomez said. “Of course the money is important but it’s not always how much money you will make. Look at Deontay Wilder. He had the opportunity to fight Anthony Joshua and that fight would have broken records. Now they both have losses. It will still be a big fight when they eventually fight but it will not be anywhere near what it could have been when they were undefeated.”

Among the larger fights which were postponed last month was the Vergil Ortiz Jr.-Samuel Vargas main event which was to be held at The Forum in Los Angeles, and also the March 19 return of Joet Gonzalez. Also there was an announcement due to go out regarding the Canelo Alvarez-Billy Joe Saunders May 2 bout, which is in a stalemate.

“Joet and Vergil understood the situation and how difficult it was,” Gomez said. “They were so close to fighting. First the President announced the travel ban, then the NBA postponed their season and from that day on our lives changed. It’s an unprecedented situation that none of us have ever seen in our lifetime.”

The further the delay goes the more the window will open for a Canelo Alvarez-Gennadiy Golovkin III bout for September.

“Everything is up in the air,” Gomez said. “It’s still possible to get the deal done with Billy Joe Saunders because we were so close and then everything froze. Canelo wants to bring his fans the best fights and he has proven this over the years. When we are ready we will sit down with Canelo and show him every option available and he will make the decision. This is how we have always done it, and it’s no different when we are ready to go back.”

In the meantime, Gomez and Golden Boy Promotions will continue monitoring the situation and helping the community in any way they can. Oscar De La Hoya and his wife Millie Corretjer recently announced a $250,000 donation to Adventist Health White Memorial Hospital to assist them in their COVID-19 response efforts.

“Oscar is doing a lot to help the community and he doesn’t do it for publicity,” Gomez said. “Sometimes the stuff he does gets out and it’s great because others get inspired by it but he has been doing it from the goodness of his heart for the past 25 years and all of us at Golden Boy are trying to give back. I hope it inspires others to do the same.”