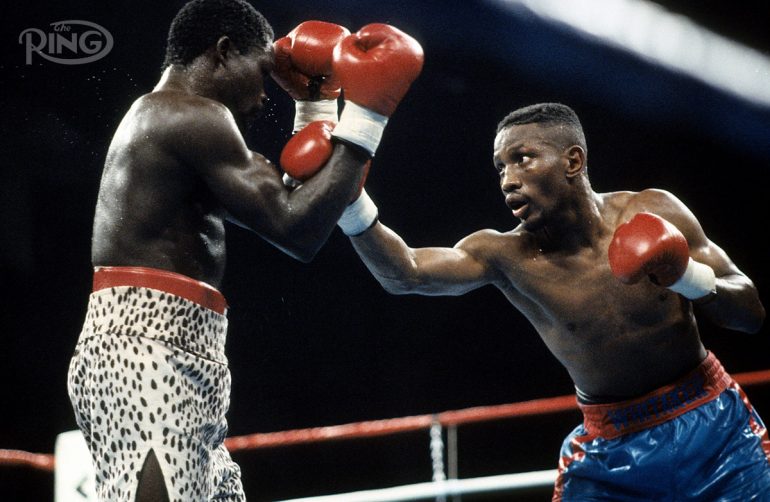 Photo from The Ring archive
02
Apr
by Anson Wainwright

Editor’s Note: This feature originally appeared in the October 2019 issue of The Ring Magazine

Pernell Whitaker was one of the most skillful boxers, not just of his generation but of all time. Regarded as one of the best defensive fighters ever, he had an otherworldly knack for making even fellow Hall of Famers look ordinary. “Sweet Pea” won six major world titles from lightweight to junior middleweight between 1989 and 1995, reigned as welterweight champion until 1997, and regularly sat atop the mythical pound-for-pound lists during that time (and in fact inspired The Ring to create a belt recognizing him as the P4P champion).

Whitaker was born in Norfolk, Virginia, in 1964 and began boxing at 9 years old. He won silver at the 1982 World Championships and upgraded to gold at the Olympics in 1984. He exited the amateur scene with an outstanding 201-14 record.

“It was the most successful time in my life, winning the Olympic gold medal,” he said.

He turned professional in the fall of 1984. In early 1988, he challenged Jose Luis Ramirez for the WBC lightweight crown but lost a highly controversial split decision to the Mexican. Unperturbed, Whitaker bounced back, beating Greg Haugen for the IBF strap a year later. It was the start of one of the most distinguished lightweight reigns in history. Whitaker put on a virtuoso performance against Ramirez in a rematch, winning the Ring championship and WBC title, and then knocked out Juan Nazario to add the WBA belt and become the first undisputed lightweight champ since Roberto Duran. 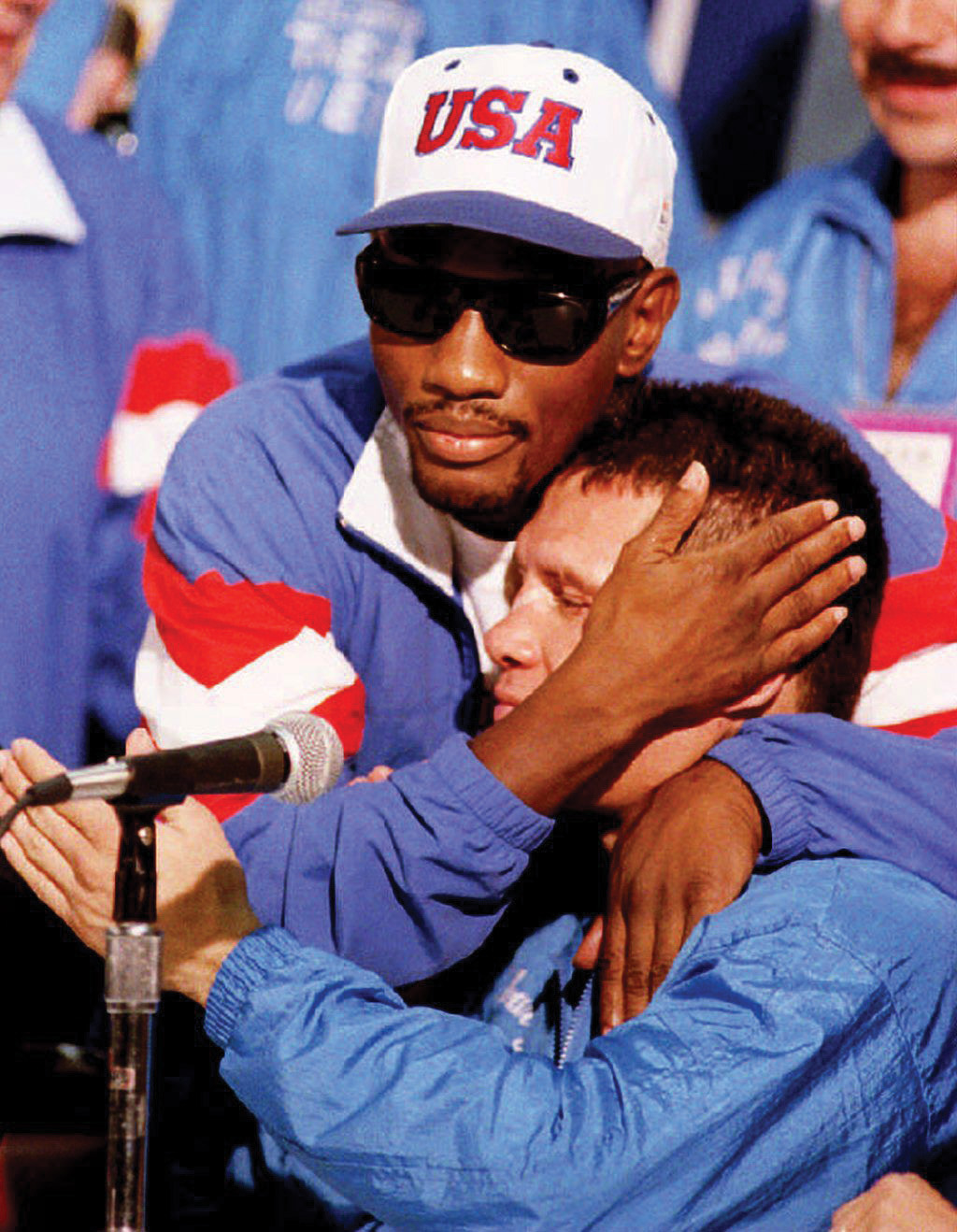 The southpaw wizard made a brief pit stop at junior welterweight, where he won the IBF title, before jumping to welterweight. At 147, he won the WBC belt and lineal champ status from Buddy McGirt.

Then, in September 1993, Whitaker met the legendary Julio Cesar Chavez, who entered the showdown with a mind-boggling 87-0 record. At the conclusion of 12 rounds, it looked like the American was a clear winner, but he had to settle for a baffling majority draw.

In the middle of his welterweight reign, Whitaker moved up to 154 pounds and bested the much bigger Julio Cesar Vasquez for the WBA title. He promptly dropped back to 147, where, in total, he would amass eight defenses before losing in controversial fashion to Oscar De La Hoya.

Although he continued to fight, Whitaker’s appearances were less frequent, and he retired after a shoulder injury in 2001. He was inducted into the International Boxing Hall of Fame in 2007 with a record of 40-4-1 (17 knockouts).

Whitaker spoke to The Ring on July 2 about six of the victories that defined his remarkable career. Less than two weeks later, he was tragically struck by a car in his hometown and died at the age of 55.

“It was a big snow day, but we still had 10,000 people come out. It wasn’t difficult at all (to put the Jose Luis Ramirez disappointment behind me). I knew I’d get a rematch. It was a great fight for myself. I had great trainers in Georgie Benton and Lou Duva. George taught me how to be a good professional. I took that advice and went in the ring and took my time, was patient and made the fight easy. He was pretty good, but I was at my best and the combinations were flowing out and the jab looking good. Just having a lot of fun in the ring.”

“I thought I easily won (the first fight), but I was in another country. I don’t think I did anything wrong the first time. It’s always good to get a rematch of a first fight you should have won. Ramirez was the champ. I don’t know what he did well – I just countered what he did. He fought the way he thought he could win the fight, but I learned a lot from the first fight. So I just went out and did things a little different and made it look a little easier the second time around. I knew I was going to do a lot better than the first time; I knew I could make this fight a lot easier than the first time. I (think I won nine rounds in the first fight) and the rematch I won all of them. He didn’t get a single round from me. I was a young kid. Winning a world title is always exciting; I was super excited for my family – my mom, really.”

“At the press conferences, I try to be professional. I’m not your guy to try to go and tell a guy what I’m gonna do. I’m not gonna give away my strategy to anybody. I go to the press conference, say hi to everybody and wish my opponent good luck. I like Azumah Nelson. I think he’s a great champion. He was a comer – he kept coming, never going back – and I’m good at hitting guys, and he had to go back. Everybody I faced was a great fighter, but fights are only as hard as you make them. I work hard, so when I put the work in, I’m looking forward to a (positive) result.”

“I couldn’t make 140 anymore; I stayed there long enough. So I moved up to 147. It’s the mecca of sports – every man, woman or kid wants the opportunity to perform at the Garden. The first time, they said he hurt his shoulder, so I gave him a rematch. I didn’t want no complaining about losing. Fool around with him, trick him – it was fun.”

“I gave up everything. I took the fight wherever they wanted; it doesn’t matter where I perform at. I do the work, 6-8 weeks, go to wherever the venue is and be ready. With Chavez, we had a big crowd there, and I wanted to be number one, pound-for-pound – we can’t both be walking around saying we’re pound-for-pound the best fighter. Let’s get in there and see who is the best. No rivalry, just two great fighters going in there, and we’re going to see who the people choose as their pound-for-pound great fighter. It was built up pretty well; actually, I didn’t do a lot. Everybody was looking forward to seeing the fight. I just stayed focused on what I had to do when I got in there. It wasn’t just Mexican fans. It might have been the majority, but everybody showed up – celebrity people. The world was there, because everybody who couldn’t get there (in person) watched it at home on TV and they got the same result. I always try to get off to a good start. Out of the first six rounds, I at least want to get four or five of them rounds, if I don’t get them all. I didn’t look to fight this man (to avenge Olympic teammate) Meldrick Taylor. Meldrick fought a good fight, just came up a little short. Me, personally, I knew it wasn’t going to be that type of fight. I think I got at least nine of them rounds. I got to give something to Julio: He got at least three of those rounds. Other than that, he got nothing. I’ve seen him a few times – he’s a friend, it’s never personal.”

“I just went up (in weight) – it was available, so we took it. I didn’t stay there. I just went up there and won the title and moved back down to 147. I just took a challenge; even if the guy won the fight, I would still have held onto the welterweight title. Actually, I think I weighed about 149, 150 at the weigh-in. I didn’t have a problem at welterweight; I just moved up and took that fight and put it together and went out and won the title. Just that one fight.”

THOSE WHO KNEW HIM BEST

Who better to describe Pernell Whitaker than the men who shared the ring with him? Six of Sweet Pea’s opponents (and one of his trainers) recall their experiences:

“He was the better man. I’m not afraid to say that. He was a great fighter, and he beat a lot better guys than me. I fought a lot of good fighters. Hands down, Pernell was the best by far. He was fast. He was hard to hit. He had great defense. He didn’t square himself up. He was the smartest guy. He had fast hands and fast feet.

“Pernell didn’t move much; he’d stand in front of you and turn you around. From that southpaw stance, he was phenomenal – he could turn you and slip; he could get under the shots and still be in the same place.  His balance was great. He had it down to a T.”

“Whitaker was a master of lateral movement; he moved everywhere. Very intelligent fighter. That’s why he was champion in four weight divisions. He knew how to score and move and be defensive. Masterful in defensive skills. He knew how to move around the ring. He was only 5-foot-5 and could take on any guy and still make them look ridiculous.”

“He was very elusive. He was just hard to find and especially hard to hit. He was very intelligent.”

“When boxing experts discuss who the best defensive fighters are, the name of Pernell Whitaker is aLways in the conversation. We knew that he was very good defensively, so we came prepared for the fight.”

(trained Whitaker from the mid-1990s onward) “I’d say he landed about 85 percent of his jabs; he didn’t waste anything. He set everything up with his jab, then he played everything off his defense. With Pernell, if you’re watching him, he might give you a feint, he might give you this and that, but he’s always going to jab to make sure he’s at the right distance when he’s throwing combinations. The thing about Pernell was he used every aspect of his game for defense. Everything he did, he made a defensive move first to make you do something so he can create his offense – and that’s why Pernell Whitaker was the best defensive guy I ever worked with. He had a great jab, his defense was probably the best you’re going to see in a very long time, and he had all the technical skills in the world. Talent-wise, you just can’t beat Pernell Whitaker.”