Boxing Monthly magazine to be discontinued 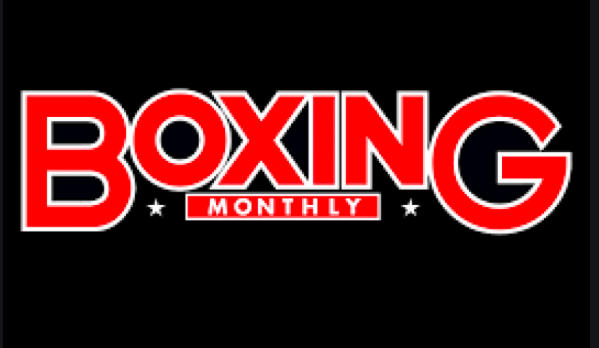 It was learned yesterday that Boxing Monthly, a London-based fight publication that has been around for decades, will soon be discontinued.

Kelsey Publishing, which purchased the magazine in 2018, informed the Boxing Monthly (BM) team that the upcoming May issue would be the last. Publishing of the magazine will cease afterwards, with the associated web site expected to soon follow.

“When a publication dies, I believe that for some readers it is almost as if a part of their life is now missing, if only a small part,” said editor Graham Houston (see his Twitter adios below). “It seems, from responses to the closure, that many readers feel this way about the death of Boxing Monthly. The magazine had a run of 30-plus years. The contributors all went beyond the extra mile.” 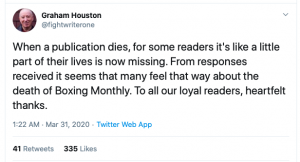 Glyn Leach helped launch the magazine in 1989 and served as editor until his death in 2014. Houston, who had already been the American editor for years, took over full editing duties from then on. That same year he was inducted into the International Boxing Hall of Fame. He, along with a team of passionate contributors, have since dedicated countless hours to keep the magazine going in an era where an increasing number of print publications have gone extinct.

“When Glyn passed far too young, I took over the reins as editor and for most of us at the magazine, we felt that we were in a sense carrying on Glyn’s legacy,” said Houston. “So, the sadness at Boxing Monthly’s demise was felt on an especially personal level by those of us who knew and loved Glyn.”

The magazine has been one of the few remaining monthly periodicals dedicated solely to boxing. No MMA crossovers, no tabloid rumors or click bait, no selling out. Sadly, in the end, that may have contributed to its demise. Although Boxing Monthly mainly focused on the UK fight scene, there were a number of international contributors covering fighters and events from around the world. Several of them shared their thoughts on the sad news with The Ring.

“Being involved with the magazine and then editing the website was an honor and a privilege,” said Luke Williams. “Getting to know many of the other contributors was a total pleasure. I passionately believe that BM’s global focus and range of features will be sorely missed in the boxing world. Nothing lasts forever, but the memories will.”

“Very sad to see 31 years of hard work and some brilliant writing come to an end,” said Shaun Brown. “Boxing Monthly had an edge to it, thanks largely to its former editor Glyn Leach. A rebel with a big heart who gave opportunities to many writers, for some getting their first time in print.”

“As a young man I was travelling in the USA and remember spotting a copy of BM on the shelf in a Barnes and Noble in Chicago,” said James Oddy. “It helped drive home that this was a global publication for a global sport, connecting fans just like me around the world. Years later, seeing my name in print for the magazine was one of the proudest moments of my professional life. I couldn’t help but think of some kid in Chicago reading my words and feeling the same inspiration I’d felt all those years before.”

“It’s very sad to see over three decades of work come to an end,” said Lee Gormley. “Everyone involved with Boxing Monthly has done a great job over the years in making it a quality go-to source for fight fans, both in print and online. The sport has definitely taken a hit here as BM hangs up its gloves for good.”

“I grew up reading Boxing Monthly,” said Andrew Harrison. “It was always an ambition to write for the magazine, and Glyn gave me a break in 2013. After he died, I think we all assumed the magazine would fold, but Graham did an amazing job rallying a bunch of young writers keep the magazine going.”

“Kudos to Graham Houston for keeping the magazine going after Glyn passed,” said Colin Harris. “For 22 years I got a buzz of being part of the team. It was a thrill to see my name in print.”

“I’d been subscribing to BM since the mid 1990’s,” said Paul Zanon. “When the opportunity came to write for the publication in 2014, I was simply bowled over. I’d like to think we are in a holding pattern before somebody bails out the magazine. Here’s to being positive amidst an unprecedented period in history.”

“Although BM carried interviews with all of the big names and the latest news, there was always room for a human story or insights into fighters outside of the PPV big leagues,” said Garry White. “Like many, I bought the magazine as a kid, and then I ended up writing in it and having my work edited by Graham Houston. I can still scarcely believe that to be honest.”

“Boxing Monthly took a truly global approach to what is a global sport,” said Anthony Cocks. “This international approach made the magazine and website truly unique in the boxing media landscape. Fight fans will be poorer for its passing.”

“I had just turned 25 when I decided I wanted to become a boxing writer,” said James Lupton. “The November 2018 issue I got my wish. Since then I have had a total of ten features in print. The proudest moments of my working life.”

“It’s been a real privilege for me to be involved with BM these past two or so years,” said Luca Rosi. “I feel truly lucky to have learned from the best. Our love for the sport and BM will never be dimmed and I’m sure this isn’t the end but a new dawn.”

Check out a video homage to the mag below: