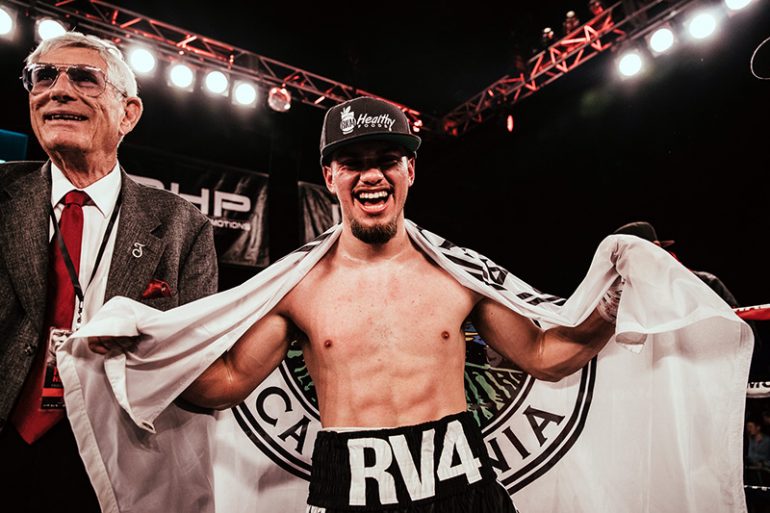 Phil from DuPont, Washington was more impressed with the performance of Ruben Villa (pictured with co-promoter Ken Thompson) on the first ShoBox of 2019 than he was with hyped headliner Devin Haney. Photo by Rosie Cohe/SHOWTIME
31
Mar
by Joseph Santoliquito

This should be a happy time for Ruben Villa. For the first time in his career, the 22-year-old southpaw is ranked by The Ring (No. 9) and IBF (No. 5). It was nice for the undefeated featherweight to see his name listed among the top 10 at 126 back in early February, when fights were still taking place and everything was normal, before the COVID-19 pandemic took over the world.

Part of that thought process emanates from his calming DNA; the other part comes from conditioning, in a little game he developed in his youth from his father.

Nothing ever shakes him.

Anxiety impedes life movements, which includes movement in the ring.

“My dad taught me not to panic, and that came from something he taught me as a kid,” Villa recalled. “My dad and I used to play fight when I was around seven or eight, and he would toss me in a blanket. He was 200 pounds and was too big to get around. He wouldn’t let me out. At first, I used to kick, punch, scream and holler. I would panic. But, I remember him telling me, ‘Don’t panic, it’s going to be okay.’

“I can still remember him telling me that. I learned how to breathe and how to keep a clear head. I learned then not to panic. I just knew he was my dad and he wouldn’t do anything to hurt me. That’s how we ended roughhousing.

“He tried to bring the anger out of me, and the more he tried, the more I stayed calm. I don’t know why I always go back and remember those times, but anytime I do face a tough situation, I think how calm I was.”

Villa is still training, trying to keep in some semblance of shape.

He said he didn’t really care when he found out he was ranked.

“Being ranked just motivated me more,” said Villa, who will turn 23 on April 16. “I still think I’m being slept on when it comes to recognition that I deserve. Being ranked keeps me humble. It pushes me. It will push me to a different level. I know with those close to me and my team, I’m No. 1 to them, and they’re No. 1 to me. That’s what counts.

“I’m still putting in the work. I’ve been a pro for four years and the way boxing media and social media is, my name is never really mentioned. But that’s been that way my whole life. So, when I get ranked and get some recognition now, don’t get me wrong, it is nice to be recognized. But I’ve worked my butt off and I always felt my amateur background is the reason I’m here. I’m going to stay in my circle and move forward. The outside stuff I don’t care too much about.”

Villa is hoping to fight two more times this year. This time next year, he’s looking to get a title shot. WBO featherweight titlist Shakur Stevenson (13-0, 7 KOs) is constantly broached. As amateurs, Villa and Stevenson split four fights between them. Though Villa believes that by the time he’s in a position for a 126-pound title shot, Stevenson will be gone, moving up to junior lightweight or lightweight.

“People forget how big Shakur is,” said Villa, who walks around at about 140 pounds. “I spoke to Shakur and as far as him staying at 126, that won’t happen. I’m good at 126; Shakur is bigger boned than I am. I feel I’ll be at 126 for a while. I’m still building to be a world champion and I have nothing but good things to say about Shakur. He’s a talented fighter and it’s going to be some time before we fight again as pros.

“We fought four times, and anytime you fight someone four times, there is a mutual respect you have toward someone. I think he respects me, and I know I respect him. But I respect everyone I fight, until that bell rings, that’s when it’s time for business.”

Villa stressed one of the areas he would like to sharpen is his intensity.

In the meantime, Villa is going to wait—like the rest of the world.

“Right now, I need to get meaner during training camp,” Villa said. “I’ve always learned to fight not mad. Again, that came from when I was a little kid. That won’t change.”