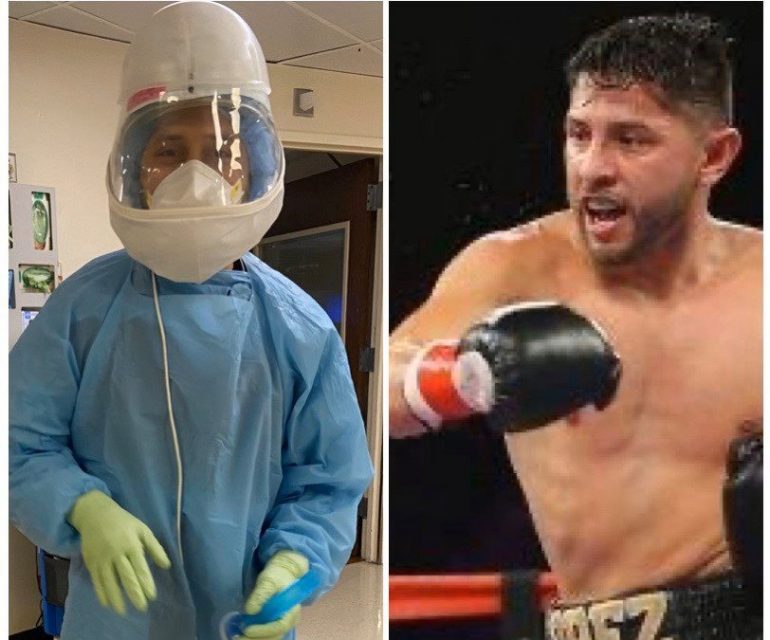 Abraham Lopez is covered from head to toe in a PAPR outfit to protect himself while treating suspected coronavirus patients.
30
Mar
by Ryan Songalia

Abraham Lopez is used to confronting danger. As a boxer he stepped into the ring over 100 times as an amateur, and holds a 23-1-1 (16 knockouts) record as a professional. What he has confronted at his day job — he works as a respiratory therapist at Olympia Medical Center in Los Angeles — is unlike any challenge he’s dealt with in the ring.

Lopez is among the many ‘front liners’ who have been battling to save lives as the COVID-19 pandemic overwhelms hospitals around the world. His work includes operating ventilators — the life-saving machines which simulate breathing for those whose lungs fail due to complications like pneumonia or acute respiratory distress syndrome. He says his facility hasn’t seen too many cases, about a dozen confirmed cases or so, with no deaths reported. The 204-bed acute care facility has been tasked with stabilizing coronavirus patients before transferring them to larger facilities like Cedars-Sinai Medical Center or UCLA Health.

“I don’t fear going into the ring because I prepare for it. But at work you can prepare so much and you never know,” said Lopez, 32, of La Puente, Calif.

Treating suspected coronavirus patients includes donning powered air-purifying respirators (PAPR), which cover the entire head, plus a full gown and mask, gloves and booties to cover his shoes. “We look like we’re going to the moon,” Lopez says.

The hospital only has six PAPR suits, meaning that doctors, nurses and respiratory therapists in the intensive care unit often have to share them. They’re cleaned thoroughly with bleach wipes after treating each patient, to ensure that any viruses on them don’t infect other patients.

“It’s a scary situation right now, we’re trying to hit it with all types of antivirals and meds and it’s barely doing any work. We haven’t seen anything like this. We were being blindsided by it,” said Lopez.

“Never in a million years did I think that something like this would happen. But it’s very fulfilling to be able to help people in their time of need.”

The scope of the coronavirus pandemic, which has resulted in over 700,000 reported cases worldwide, including about 140,000 in the U.S., has stretched the healthcare system. Dr. Anthony Fauci, director of the National Institute of Allergy and Infectious Diseases, estimates that millions of Americans will become infected, and that between 100,000 – 200,000 people in America will die from it. Like in many pandemics, many of those infected have been the healthcare workers who are treating the sick.

It’s something that Lopez thinks about when he heads into work each day.

Each day after his 12-hour shifts end, he changes clothes in the garage, then meticulously wipes down his phone, keys and backpack with antibacterial wipes, and washes his hands and face before entering the house.

“It’s a scary situation because I come home, I have a fianceé, I have a family and I don’t want to get them sick.”

Work in the medical field entails long hours and stressful labor, but offers the sort of job security that boxing never could. Even though he hasn’t fought since 2017, when he stopped Isao Gonzalo Carranza after four rounds at The Forum in Inglewood, he says he’s not yet done with boxing.

“I’m just sitting my contract out, it expires next month,” said Lopez, who is currently signed to Golden Boy Promotions. Similarly, he had sat out three years, from 2012 to 2015, while his contracts with Thompson Boxing and Gary Shaw expired. Lopez turned pro in 2008, and has scored wins over fringe contenders Jorge Diaz and Julian Ramirez. Staying in shape hasn’t been difficult, even at a time when gyms across the country have been shut down, because he trains out of his garage gym with his father, Rafael, aged 59.

“I’m not afraid to fight anybody,” said Lopez, who has competed mostly as a featherweight, but says he’d return at junior lightweight or lightweight. “I’m in this sport, I’m risking my health and I want to get paid. I’m not saying millions because I’m not a world champ but at least enough to get by.”

Lopez made the most out of his previous layoff, studying to get his respiratory therapist certification at East Los Angeles College in Monterey Park. It was his mother, who came from Mexico at an early age, and then studied to become a pharmacy technician, who instilled in him the importance of getting an education.

Initially he had wanted to study nursing, but one tag-along with his nurse cousin quickly changed his mind. “As soon as she started cleaning butts, that’s where I was like I can’t do this,” said Lopez. Looking elsewhere, he asked his cousin what the other worker handling machines was doing. When told that he was a respiratory therapist, Lopez followed him around for the day, and ended up taking up that course instead.

It hasn’t been easy splitting his time between his medical and boxing life. Prior to his bout against Gabriel Tolmajyan in March of 2012, says he had to balance training twice a day with studying for his exams, while helping treat patients twice a week in clinical rotations. He would wake up at 3 in the morning to do roadwork, do his clinical work all day, train later that night, head to bed at 10 at night, and then do it all again the next day.

“It was a real tough camp but we pulled it off,” said Lopez. He won the eight-round fight by unanimous decision.

Lopez says he’d be ready to jump right into the mix after a tune-up fight, and then head to a big fight. With all boxing events canceled for the foreseeable future, there’s no bigger fight than coronavirus. 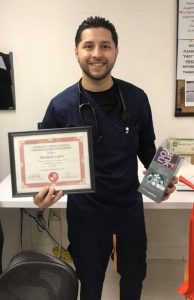 Cases continue to rise, including in California, where Gov. Gavin Newsom says coronavirus patients admitted to the ICU had doubled overnight from Friday, when this interview was conducted, to Saturday, according to a state press release on March 28. Newsom said that the state had 7,500 ventilators in its hospital system prior to COVID-19, and has added over 4,200 since then, though some are in need of repair work. They’ve set a goal of adding another 10,000 units to deal with an expected surge in patients.

Stay-at-home orders have been instituted throughout the country in order to “bend the curve,” or spread out the rate of infection to prevent hospitals from being overloaded at once. Still, the nightmare scenario, where the demand for ventilators exceeds supply, weighs heavily on Lopez’s mind. Already discussions have taken place about which patients would be prioritized, Lopez says.

“They were talking about that, the age of someone plays a pivotal role. You’d rather save a younger person’s life than an older person’s life, I don’t want to play the hand of God. We should be saving both patients. But if we don’t have machines, we obviously gotta save the person who hasn’t lived, [rather] than the person who has lived,” said Lopez.

“We talked about it but we have yet to come to that position. For now we’re trying everything possible to stabilize and to maintain them, and keep them living and functioning.”

Unlike in boxing, there are no matchmakers to lobby for easier fights in the ICU. The fight at hand is the toughest healthcare workers, and the many other unsung heroes who keep our society running amid unprecedented social interruptions, will ever battle.

“I look forward to going to work all the time. But now I know what I’m getting myself into,” said Lopez.

“I took that oath, it’s something I need to do. I gotta man up in the time of need.”