Golden Boy to launch new documentary series ‘Off the Canvas’ 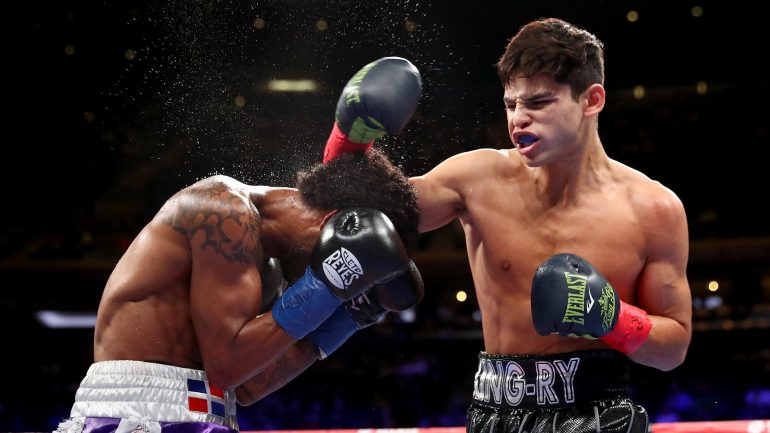 Golden Boy Promotions is launching a new documentary series titled ‘Off the Canvas,’ it was announced Friday afternoon.

The series, which will focus on the behind-the-scenes reactions of a boxer immediately after a fight, will debut Monday on DAZN.

The premier episode of ’Off the Canvas’ will feature unbeaten lightweight contender Ryan Garcia following his highlight-reel first-round knockout victory over Francisco Fonseca, which took place at the Honda Center in Anaheim, Calif. on February 14.

Oscar De La Hoya, the CEO and Chairman of Golden Boy, believes the series will offer boxing fans another way to follow and get to know fighters.

“This series is part of our longstanding effort to provide fans with compelling narratives for our fights,” said De La Hoya. “One way to do that is by getting to know our fighters intimately. Each member of our roster has their own distinctive personality, and the more fans get to know them the way we do, the more they will be on the edge of their seat each time they see them perform. ‘Off the Canvas’ will allow fans to get up close and personal in a way that has never been done before.”

“Our marching orders from Oscar De La Hoya were to bring him a unique look into the life of a fighter,” said Scott Tetreault, VP of Digital Marketing and Branded Entertainment at Golden Boy. “This meant breaking out of the traditional mold established by series such as ‘24/7’ and ‘All Access.’ While these are legendary shows in their own right, boxing fans haven’t really gotten an extended look at a fighters’ life after he steps out the ring. Our intent with this show was to change things up and be as authentic as possible, showing the good, bad, and the ugly that may occur in a boxer’s life.”

Garcia was penciled to face former lightweight titleholder Jorge Linares on July 11 at Staples Center in Los Angeles, but scheduled and proposed fights are currently on hold due to the coronavirus (COVID-19) pandemic.