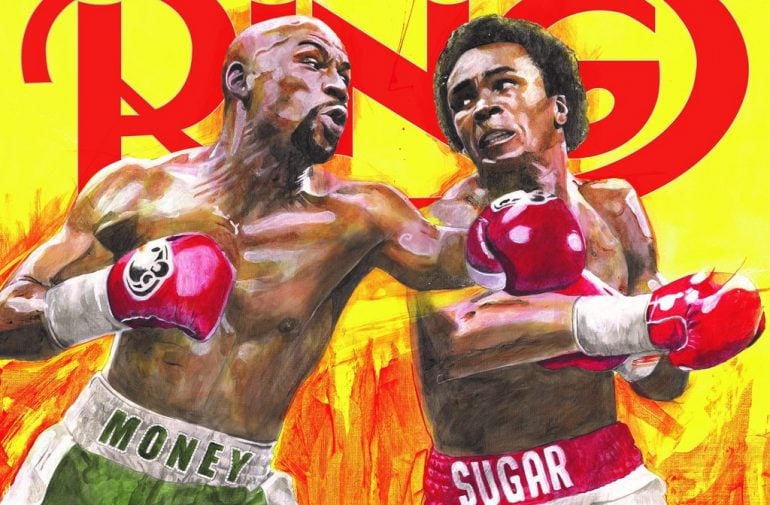 Editor’s note: This feature originally appeared in the September 2018 issue of The Ring Magazine.

The legendary Sugar Ray Leonard offers a wink and flashes that trademark megawatt smile. The super-skilled Floyd Mayweather Jr. throws $100 bills in every direction. Tens of thousands of fans explode as ring announcer Michael Buffer completes the introductions. A throng of assembled media has ventured to a swanky Las Vegas resort casino from all four corners of the earth – and that would just be the opening press conference.

Had it been possible for Leonard and Mayweather to share the prize ring during the peaks of their physical and boxing prowess, their showdown would have been a global event and the hottest ticket on earth – an unmissable, all-American pay-per-view extravaganza between two champions who transcended the sport.

Both champions captured world titles in five different divisions – Leonard from welterweight to light heavyweight, Mayweather from junior lightweight to junior middleweight. However, a hypothetical Leonard-Mayweather showdown would make most sense at the welterweight limit, where both fighters enjoyed enormous success. In 1981, Leonard became undisputed champion at that weight, and from 2006-2015, Mayweather annexed a variety of world title belts at 147 pounds to solidify his own dominance.

The ominous specter of nostalgia might sway some fans into believing that Mayweather is totally out of his depth here. But those who have been around him, fought against him and studied him believe otherwise. Leonard’s greatness is beyond reproach, but so is Mayweather’s, and this is a mythical matchup that ticks all the right boxes.

“With Floyd, I vividly remember turning to Top Rank president Todd Duboef and saying to him, ‘This kid has a chance to be really special’ at the end of Floyd’s pro debut,” recalled Top Rank matchmaker Bruce Trampler. “He struggled a couple fights later in Albuquerque and had a couple of other tough fights along the way, but all of his 27 fights for [Top Rank] were learning experiences that prepared him to be the best of his era.

“I had the greatest respect for Ray Leonard as a fighter when he came out of the 1976 Olympics in Montreal. My esteem only grew during his pro career, and to me he is the face of boxing over the last half century – a man of class, dignity, and integrity. I like great fighters who transcend several weight classes and prevail at each level, and Ray is one of the best ever.”

The show-stealing Leonard made his bones by defeating Hall of Fame champions Wilfredo Benitez, Roberto Duran, Thomas Hearns and Marvelous Marvin Hagler. His remarkable skillset and grace were juxtaposed alongside a fierce killer instinct and desperate thirst for victory. Leonard thrived under pressure and there was no challenge too big. 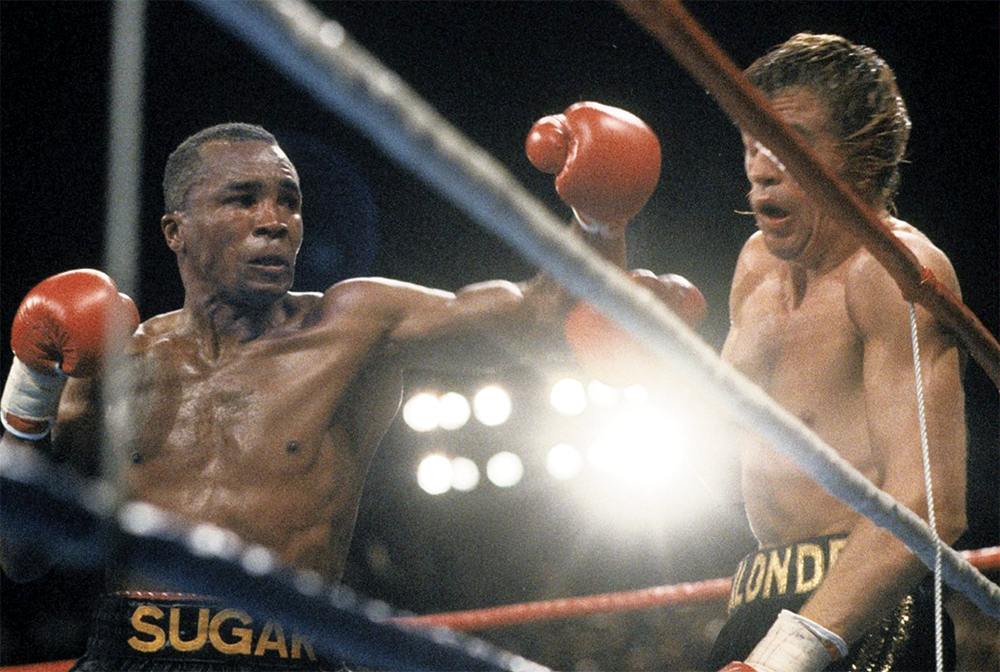 Even when Leonard (pictured here against Donny Lalonde) was past his prime and competing in heavier weight classes, he still exhibited a fierce killer instinct after hurting his opponent.

By the time he faced the significantly larger Donny Lalonde in November 1988, “The Sugar Man” was a three-weight world champion and a living legend. Lalonde held the WBC light heavyweight title, and savvy negotiating by the Leonard camp led to that organization’s newly formed super middleweight belt being on the line in the very same contest. Lalonde agreed to drop down to the 168-pound limit, and the Canadian power-puncher recalls being surprised by more than just the smaller man’s immense talent on fight night.

“I have to say that everything was better than I expected,” said Lalonde, who scored a fourth-round knockdown before being stopped by a savage attack in the ninth. “It wasn’t that I underestimated Ray’s skills; what I underestimated was the parts you can’t measure: balls, heart, intestinal fortitude, mental toughness.

“Ray has acknowledged that he was hurt many times in our fight, but you didn’t really see it. He was brilliant at masking being hurt and he never, not even for a split-second, had any quit in him. When Ray was hurt, he was almost untouchable. What we do every day, 10,000 times or more in repetition, is what we will do in our unconscious mind if our bodies are cut off. I found that Ray’s survival instincts were even better when he wasn’t thinking. I soon realized I had to knock him out with one shot, because I looked like a fool trying to hit him when he was hurt.”

Opponents of the almost invisible Mayweather can relate to that predicament. According to CompuBox, the former pound-for-pound king is the most efficient fistfighter in modern boxing history. Heading into his WBA junior middleweight title bout with Miguel Cotto in May 2012, Mayweather had averaged a 46 percent connect ratio while his opposition had landed only 16 percent of their total punches against him. That is an incredible statistic.

When the super popular Ricky Hatton brought 30,000 British fans to Las Vegas for a money-spinning showdown in December 2007, he was unbeaten in 43 fights with 31 knockouts. A terrific pressure-fighter, Hatton had ended the reign of longtime junior welterweight champion Kostya Tszyu with a savage and relentless attack, unified two titles against Carlos Maussa and won the WBA welterweight crown from Luis Collazo. However, “The Hitman” found it almost impossible to do any significant hitting against Mayweather, 38-0 at the time.

“Mayweather’s defense was exceptional,” acknowledged Hatton, who was stopped in 10 rounds. “It was a unique style with the left hand low, the roll of the shoulder, and he was able to catch shots or make punches glance off him. Even when a shot did land, it rarely landed cleanly; he either got a half glove on it, or a half roll (of the shoulder). His defense was brilliant, and that’s why he was able to carry on until he was 40 years of age.

“If you threw the left hook, he caught it with the right glove. If you threw a right cross, he would deflect it with his shoulder. If you threw the left hook to the body, he would get his elbow in. Also, because his left hand was so low, it covered the midriff. The punch that worked against him was the jab and, truth be known, I wish I’d thrown a few more jabs. Land the jab, knock his head back and then go in with the hooks.”

Stephen “Breadman” Edwards is trainer of junior middleweight contender Julian Williams and a boxing historian. His knowledge of the sport is beyond question and his appreciation of both Leonard and Mayweather is visceral.

“Mayweather is a fighter I truly believe to be a boxing savant,” Edwards said. “He may not be able to explain with words why he does certain things, but we rarely see him make the wrong decision in a fight. That’s impressive. It’s hard to accurately assess the mental depth he possesses, because he seems to be able to rise as high as he needs to. His slippery defense, high IQ and all-time great stamina would trouble Ray Leonard and any other welterweight who ever lived.

Lalonde studied Leonard diligently during his preparation. The former light heavyweight titleholder also knows firsthand just how effective the great champion was in the heat of a tough and competitive battle. Mayweather’s defensive prowess and accuracy impressed Lalonde, but he only sees one winner if the pair were to have collided in their respective primes.

“Mayweather certainly goes down as one of the greatest boxers of all time, but I would pick Leonard,” said Lalonde without hesitation. “Ray hit more effectively and his shots had more impact. Mayweather was effective in terms of scoring but he really didn’t do a lot of damage. He didn’t even seem to intend to do damage. Ray wanted to hurt you every time he hit you, and punching power would be the difference.

“Floyd had great defense, but he never fought anyone with the offense of a Ray Leonard. He fought a lot of great fighters and I give him that, but Ray was a very special and unique talent. He had the ability to punch up and down, down and up, in-between your punches; he could punch anywhere he wanted to.” 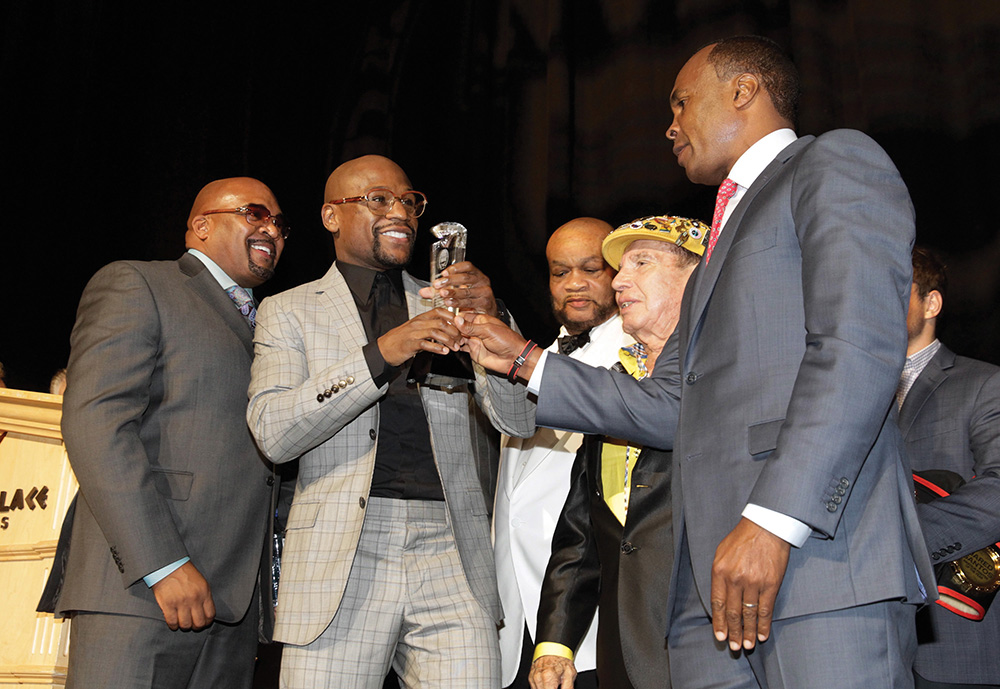 Mayweather and Leonard have met at various award ceremonies over the year. Mayweather is usually respectful, but not always.

Hatton was obsessed with fighting Mayweather years before the showdown became a reality. Despite falling short, the Manchester native gave a good account of himself against the finest pound-for-pound fighter of his generation. Mayweather turned in an excellent performance, mixing smart boxing with cerebral inside fighting to eventually wear his man down. However, despite acknowledging his former rival’s quality, the former two-weight titleholder also believes – with some trepidation – that Leonard would prevail.

“Sugar Ray Leonard was incredibly versatile,” said Hatton. “Mayweather was a clever boxer, but look at what Leonard did with Duran in the rematch, or what he did with Hagler when everyone picked against him. He was very intelligent and I think he would sort out the Mayweather puzzle. Also, and we touched on it earlier, the punch that worked against Mayweather was the jab, and no one had a better jab than Sugar Ray Leonard.

“But Mayweather belongs in that class, and even though I pick Leonard to win, if the decision went Floyd’s way, I wouldn’t be surprised – that’s how good he is. I couldn’t make a prediction with a massive amount of confidence, but if you ask me where my last pound is gonna go – I’m picking Sugar Ray Leonard.”

Trampler, like Hatton, also gave “the edge” to Leonard but was quick to point out that Mayweather more than belongs in the argument.

Edwards, who frequently engages in hypothetical matchup discussions on social media, went into meticulous detail on how he feels the matchup would have unfolded, and his vision is of a close tactical bout that would eventually ignite and provide the type of ebb and flow that fans enjoyed in 1980s superfights.

“Both guys have laser-like reflexes and eyes, so the early rounds would be a chess match,” said Edwards. “Both have great, underrated jabs, and although Mayweather doesn’t have Leonard’s volume, he makes up for it with accuracy. I can envision Mayweather catching Leonard with strong, clean counterpunches early, and at that point Leonard would start attacking. Leonard was just as good a fighter as he was a boxer, and this is his biggest advantage.

“I believe Mayweather would be right with him step-for-step, but at some point Leonard, who had the unique ability to punch while his opponent was punching, would clip Mayweather and hurt him. At that point, he would look as if he was more in control. I think Mayweather’s IQ and reflexes would keep him from getting stopped, but I think Leonard’s frenetic second-half aggression would edge a tough but clear decision.”

Would Leonard agree with the above opinions? Yes. Would Mayweather agree? Hell no. The fighter known as “Money” is on record as saying he believes himself to be better than Muhammad Ali and Sugar Ray Robinson. That caused outrage among hardcore fight fans, but Mayweather, an exceptionally gifted and decorated prizefighter, is entitled to his opinion. In terms of technical knowledge, how many people know more about boxing than he does?

Mythical matchups and pound-for-pound arguments are almost as old as the fight game itself. Would Mike Tyson have beaten Ali? Would Gennady Golovkin have overcome Hagler? Would Pernell Whitaker have survived Duran? New fighters will continue to enter the dream match tournament for as long as boxing lasts.

On this occasion, the fight of fantasy has gone the distance … and Sugar Ray Leonard has prevailed by a unanimous decision.