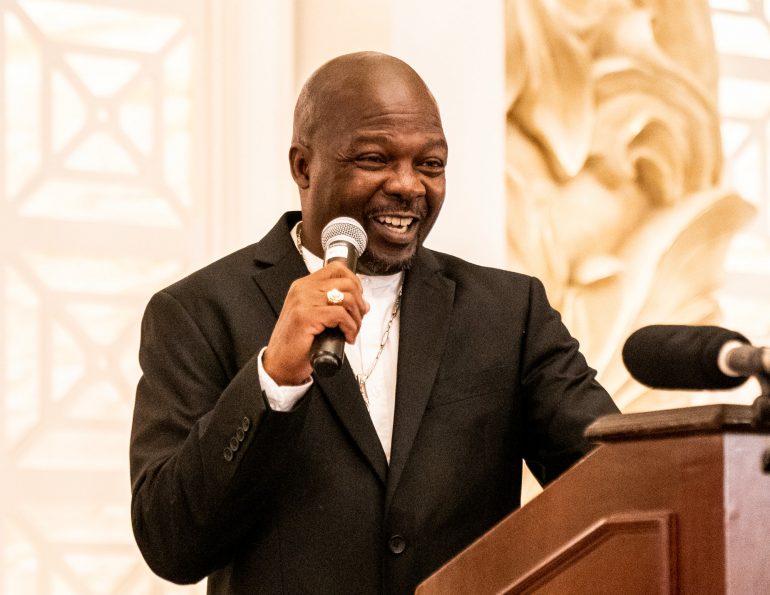 Quick-fisted Calvin Grove lived up to his “Silky” moniker, winning the IBF featherweight title in the late-1980s. He went on to face several top fighters at higher weights in the 1990s.

Grove was born on August 5, 1962, in the small steelmill town of Coatesville, Pennsylvania.

His father worked in the steel industry for nearly 50 years while his mother looked after Grove and his five siblings. He also had a large extended family and spent much of his formative years playing with his cousins.

Grove first encountered boxing when he was in the ninth grade as a 14-year-old and began his amateur career two years later. He graduated in 1979, then worked in roofing for a couple of years while he continued his amateur career. The highlight came when he won the Pennsylvania Golden Gloves in 1982. A few months later, he turned professional after going 46-4 in the unpaid ranks.

Grove fought primarily in Atlantic City in the early part of his career. He won his first 20 bouts before meeting future IBF bantamweight titlist Kelvin Seabrooks in February 1985. Grove had to recover from a second round trip to the canvas before winning a 10-round unanimous decision.

Two fights later, he won the USBA 126-pound title, which helped position him to later fight for the IBF affiliated belt.

In January 1988, Grove ​went overseas for the first time ​to face recently-minted Antonio Rivera in France. Grove recovered from a heavy knockdown to stop the Puerto Rican in four rounds.

In his first defense, nearly four months later, he met a familiar foe, Myron Taylor, the older brother of Meldrick Taylor. Grove knew the Taylor brothers from their amateur days. Back then, Taylor used to get the better of Grove but the defending titlist matured and improved enough to win a 15-round unanimous decision.

That summer Grove took his title to Mexico, yielding it in sweltering heat to extrovert Jorge Paez. Grove went down three times in the 15th round, which cost him as he lost a majority decision.

Grove’s team had hoped to make the rematch on American soil but Team Paez wouldn’t agree to it and they met in a rematch, again in Mexico, in March 1989. This time Paez stopped Grove in the 11th round.

“In both the Paez fights, it was the temperature; it was 130 degrees,” Grove said. “I wasn’t used to that temperature, inside a bullring.”

Grove stepped up to 130 pounds and quickly won the USBA strap in August of 1989, though he lost it to talented former amateur standout Bernard Taylor. He again righted the ship and was rewarded with a WBC junior lightweight title opportunity against Azumah Nelson in November of 1992. Grove put up an excellent effort but lost a close unanimous decision.

“He had experience but I knew I was going to give him all I got,” Grove explained. “Some people say, ‘Calvin won.’ Some people say, ‘Azumah won.’ I know he didn’t beat me and he knows it too.”

He rebounded to beat grizzled former IBF beltholder Troy Dorsey four months later. Grove parlayed the win into a match versus a comebacking Jeff Fenech in Australia in June 1993. Grove upset the locals by stopping the hometown favorite with a fizzing right hand.

“It was very special,” he said. “I looked at it as a blessing. My plan was to go out there and beat him.”

Grove fought Miguel Angel Gonzalez for the WBC lightweight title in the fall of 1994 but found the tough Mexican too much and was stopped in six rounds.

He continued to fight and lost three of his last four outings, though they were against a rising Angel Manfredy, Arturo Gatti and the much bigger Kostya Tszyu via one-round stoppage during a return trip to Australia.

The loss to Tszyu was enough to persuade Grove to hang up the gloves. He did so with a record of (49-10, 18 knockouts).

Grove, now 57, got married last September to longtime girlfriend Kim. He has four children and four granddaughters. The hometown hero still lives in Coatesville, a mile from where he grew up. After boxing, Grove returned to working in construction. Grove was inducted into the New Jersey Boxing Hall of Fame in 2018, where 32 of his professional fights took place.

BEST DEFENSE
Jorge Paez: Taylor was quick just like me. He had more way more experience than me. He had getting on to 500 amateur fights; I had less than 50. It was like me fighting myself. He had a good defense but he wasn’t the best. Paez had the best defense. Paez had a sloppy style; he didn’t do everything always right. His unpredictability made him difficult.

BEST HANDSPEED
Taylor: Bernard Taylor had quick hands but I was quicker than him though.

BEST FOOTWORK
Paez: He was one of those guys who comes at you and you don’t know what he’s going to do. His unpredictability made him difficult to read and know where he would be.

SMARTEST
Taylor: He boxed almost like I boxed. He throws combinations; he had quick hands. He was very clever.

STRONGEST
Azumah Nelson: When we were up close, I couldn’t push him off. Kostya Tszyu was stocky and strong. I fought Azumah in our primes; he was a real rough dude. If he hits you, you’re gonna go night-night. Miguel Angel Gonzalez was pretty strong too; his style and my style just didn’t match.

BEST CHIN
Arturo Gatti: Gatti did have a great chin. I hit him with some good shots and didn’t get any change out of him. Troy Dorsey had a good chin too.

BEST PUNCHER
Kostya Tszyu: Oh man…when he caught me and it was like, “Wow, where am I at?” He could punch. The reason he caught me was because I wasn’t 25 no more.

BEST BOXING SKILLS
Taylor: Bernard Taylor was good. He was quick; he was able to do everything, box, move, set traps. He left the best of his game in the amateurs. He should have achieved more as a pro. He had 500 fights; that’ll put a lot of wear and tear on you. You can burn yourself out.

BEST OVERALL
Nelson: That’s very hard. I always wanted to fight Nelson when I was growing up and then, when it happened, everyone said, “Grove’s gonna get knocked out. He’s not gonna last. (Nelson)’s too strong for Grove.” Physically strong, hit hard. I was past my prime when I faced Kostya Tszyu and not in my best weight class, so it is difficult to know how good he was.