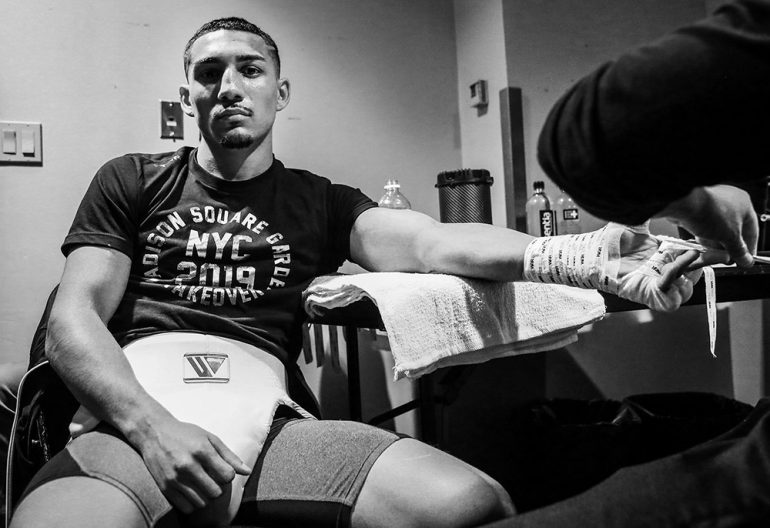 Editor’s note: This feature originally appeared in the April 2020 issue of Ring Magazine.

2018 PROSPECT OF THE YEAR TEOFIMO LOPEZ WAS DEEMED ‘EXPOSED’ AFTER ONE SUBPAR PERFORMANCE, BUT HE SOON REJUSTIFIED THE HYPE

For Teofimo Lopez, everything came so easy in his pro career – until the moment it didn’t. He had dealt with setbacks in the amateurs, including missing out on the U.S. Olympic team in 2016 (despite winning the Trials) and then losing in his opening fight for the Honduras team to eventual lightweight silver medalist Sofiane Oumiha. The night last July in Maryland was different. Lopez hadn’t lost to Masayoshi Nakatani – the scorecards were wide in his favor, in fact – but he hadn’t met expectations either. Few fans who tuned in to ESPN+ are likely to have seen Nakatani before, and that likely tinted the way Lopez’s performance was viewed. But when you are accustomed to a fighter hitting Heisman poses and doing backflips to celebrate knockouts, any fallibility is bound to be amplified.

On this night, Lopez’s catch-and-counter attack, which had proved efficient against overmatched foes like Mason Menard and Diego Magdaleno, wasn’t producing magic. The taller Japanese fighter showed he didn’t enter the fight as unbeaten by accident. His long reach meant he could hit Lopez with jabs and right hands from a distance while Lopez fell short frequently with his own punches. 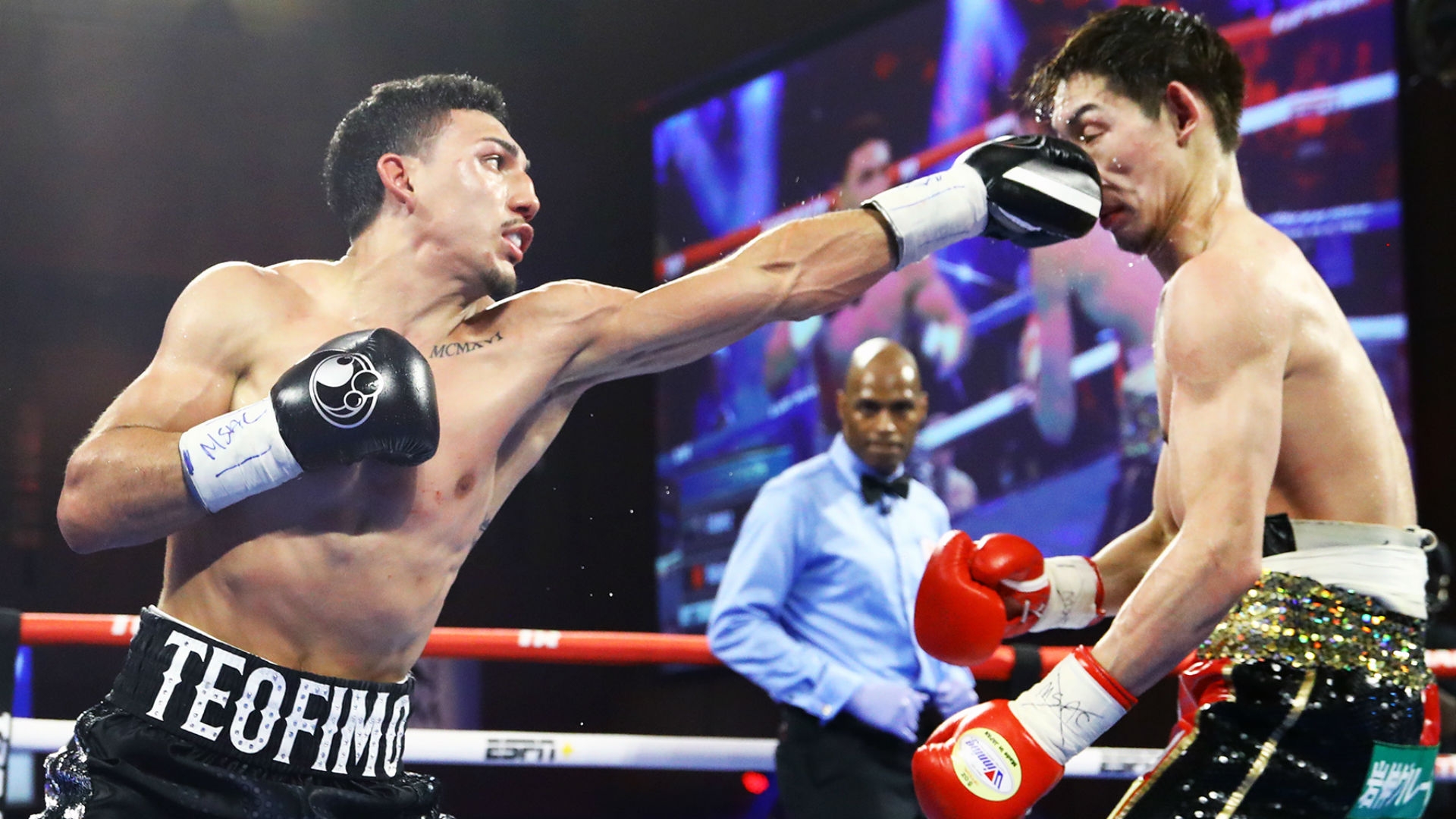 From the ESPN broadcast booth, Andre Ward’s scorecard was far closer than those of the three official judges. Timothy Bradley remarked that Lopez had been “exposed” and suggested that he wasn’t ready for his mandatory shot at IBF lightweight titleholder Richard Commey.

It was a crash course for The Ring’s 2018 Prospect of the Year in how fickle the sport can be. “And just like that you ain’t shit no more,” the Brooklyn-born Lopez tweeted afterward.

It wasn’t until later on, when ESPN’s Mark Kriegel chronicled how the young fighter’s life was in turmoil, with friction between his new wife and the family he grew up in starting to wear him down, that it became clear that Lopez wasn’t in the best frame of mind heading into fight night. “You forget that he’s just a baby,” said David McWater, Lopez’s manager. “If he was a professional football player, he’d be a senior in college; he wouldn’t even be in the pros yet.”

In public spheres, the thought that Commey would be too big of a leap for Lopez became a popular take. Commey was, after all, a well-respected fighter, the kind of hard-hitting tough guy who could bring out any vulnerability in an immature upstart and tear it open like a hole in an old shirt.

When they did meet on December 14 in New York, just four minutes into the fight, Lopez made his move. The two men opted simultaneously for right hands, only Lopez’s hit the mark first. Commey stumbled forward awkwardly, touching the canvas for a moment before wobbling into the ropes. The fight was already over at this point, but the champion earns the benefit of the doubt, and in this instance it led to a dozen unanswered punches along the ropes before the referee intervened.

It was another big knockout at The Garden, another running backflip and another trophy pose on Heisman night. As great an accomplishment as it was for Lopez to win a world title, it was also a relief.

“To be real with y’all …,” Lopez began at the post-fight press conference, then warned of the expletive to come, “… but fuck everybody. That was my moment there.

“For once in my life, I am proud of myself for the way everything turned out. That’s been a long time, 22 years, to say that.”

Even Vasiliy Lomachenko, the elite pound-for-pounder who holds the other three titles and the Ring championship at 135 pounds, had to acknowledge the young upstart.

“Welcome to my club,” said the Ukrainian star before inviting Lopez to “unificate.” “See you in April,” he added.

April will most likely turn into May instead, according to Top Rank vice president Carl Moretti, as the big showdown between the stablemates looks to be their next step. Still, there’s plenty to iron out before an offer is sent out, like the location. Despite the fight seemingly a perfect fit for New York, where both are known entities, Lomachenko’s manager, Egis Klimas, doesn’t want it in the rising star’s hometown. McWater also has a few conditions he’d like met for the fight to occur.

Going straight to the biggest star in the division right after winning your first belt says a lot about Lopez’s ambition, but it’s the fight Lopez has wanted all along.

“It differentiates him from a lot of other young fighters,” said Moretti. “You see some fighters who are champions now who don’t want to take any risk, or secondary champions who are just very happy and content doing what they’re doing, not striving to be one of the best in the sport or the best in their respective divisions. I think with Teofimo and Shakur (Stevenson), they’re leading the way with that. They just want to fight the best, and it’s very rare to see that at such a young age.”

Lopez’s father and trainer, Teofimo Sr., believes he sees something in the three-division champion that they can exploit.

“(Lomachenko) has lied to all of you guys. He’s a fake. This guy has never fought anyone. Give me a name that is even close to my son,” said Teofimo Sr., who feels that Lomachenko jumps in and out, right in front of opponents, the same way Commey did. He’s also not happy with Lomachenko saying he won’t fight in New York, saying that all parties should be open to fighting wherever they can make the most money.

“I’ll bet all my life on that fight,” Teofimo Sr. adds. “I’ll stop training if I have to if this guy even gives (my son) any trouble. Lomachenko is already scared.”

Part of the reason the fight has to happen now is Lopez’s growing body. While his team says he made 135 pounds for the Commey fight with ease, he has struggled in the past and has already begun looking up the scale. “If Lomachenko wasn’t there now at 135, (Lopez) might have moved to 140,” said Moretti.

There, Lopez would have no shortage of big fights to enhance his legacy. Jose Ramirez, who holds the WBC and WBO belts at junior welterweight, is under the Top Rank umbrella, as is Josh Taylor, the Ring/WBA/IBF unified champ, who recently signed with the company after winning the World Boxing Super Series.

“There’s a solid chance Teofimo could beat (Lomachenko), win the four belts, drop them, move up to 140 and unify at 140 in the same year,” said McWater. “If Taylor and Ramirez fought in the next six to nine months, Lopez could still fight them this year and unify two titles – completely unify four belts and two titles in the same year. That’s unprecedented, and forget about at age 22. You’re starting to talk about doing stuff that nobody else did.” 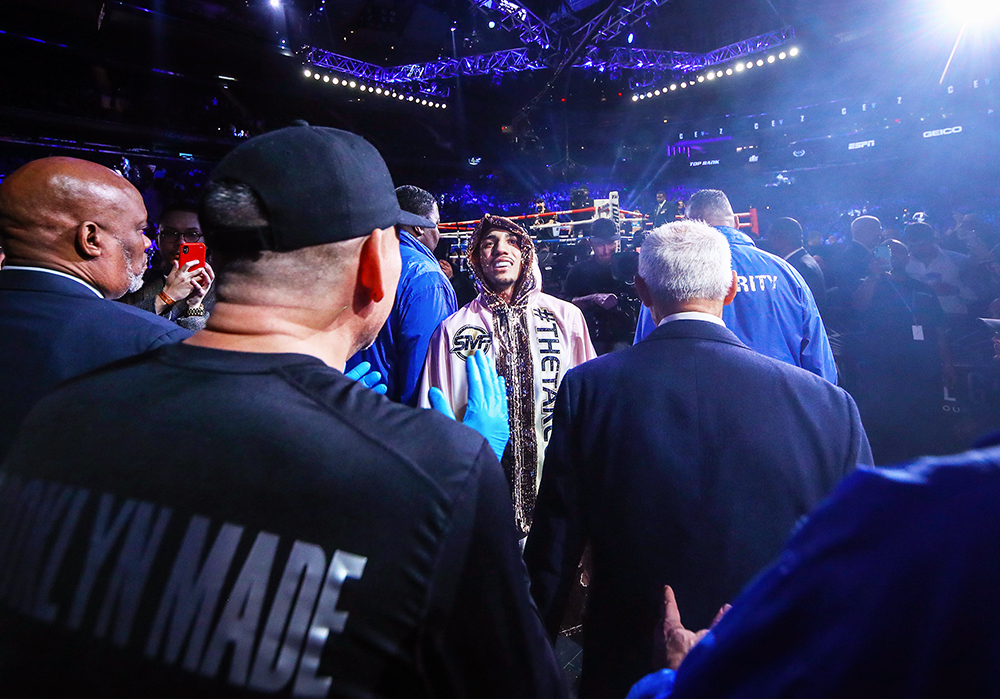 First, Lopez has to get past Lomachenko, which is no small task. If Nakatani was an awkward style to look good against, Lomachenko’s is one designed to ensure no one has a good night. Driving Lopez, McWater says, are the detractors who say Lopez won’t truly be champion until he beats the number one guy in the division. Still, Lopez wasn’t losing too much sleep over it as he headed to the Maldives for a celebratory vacation shortly after the turn of the year.

But if he can beat Lomachenko, and do it in style, McWater predicts Lopez will be the biggest star in the sport, outside of perhaps Canelo Alvarez. Teofimo Sr. is in agreement. “We’re gonna be like Floyd,” he said. “They’re gonna have to fight us because that’s where the money’s gonna be at.”

The calculus adds up for Moretti, too.

“He’s got charisma, marketability, bilingual; people want to see him. He makes great fights. He’s exciting in and out of the ring. It just gets to new levels at that point.”