His guest on this episode is a copy editor and feature writer at The Ring Magazine – Ryan Songalia. They spoke about how Ryan and his family are coping with the COVID-19 pandemic. They also got into Ryan’s background in boxing including writing for Boxing Digest, The New York Daily News, Rappler.com in the Philippines, as well as The Ring.

They discussed Ryan’s latest article – “COVID-19 Isn’t The First Pandemic To Halt Boxing“.  They looked at how the Spanish Flu pandemic of 1918 affected boxing and the world at large and what lessons we can draw from it. We also got into the effects the current COVID-19 pandemic has had on fighters, managers and boxing gyms here in the US and around the world. It was a really interesting conversation- hope you enjoy it.

Additionally, they got into the effects the current COVID-19 pandemic has had on fighters, managers and boxing gyms here in the US and around the world.

On how Ryan’s family are coping with COVID-19 virus:

“We’re doing the best that we can in these circumstances. They’re obviously unprecedented in our lifetimes. It’s me, my wife and my young daughter, Emma. So we’re just trying to stay still. I mean, as of a few minutes ago, New York State is quote-unquote “on pause”. I live in New York, obviously. And, you know, just trying to stay healthy and wishing the best for everyone out there. And hopefully, we’ll all get through this together.”

On the parallels between the effects of the “Spanish” Flu of 1918 and today’s COVID-19 pandemic:

“What I was curious about – because there are all these boxing events being canceled – and I just didn’t know what would be a parallel. Because even in World War II, there were fights going on and all these other events with fights continued. And I thought the closest parallel that I imagined was going to be the Spanish Influenza outbreak of 1918 and 1919. 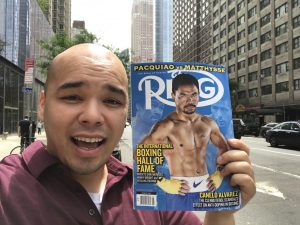 So, I did a clip search about that and I started reading. And then what struck me was that, not only was the whole world impacted by this but so many boxers as well. Because while COVID-19 is having its hardest impact on older people, the Spanish Influenza tended to hurt young people and people in their twenties, thirties, forties. So we saw a lot of boxers who were dying as a result. And, there was one story I found, like a handful of boxers over the past two weeks had died. And this is in 1918, a lot of fighters were being impacted, gyms were being closed up. And boxing didn’t take place at these large arenas the way that they do now. They took place in small local boxing clubs where the guy from this neighborhood, maybe like the Irish guy in this neighborhood would fight the Jewish guy from this neighborhood. And that was the way that boxing was in those times. And, those clubs were either closed or a lot of them were about to open up. Boxing was still expanding among the immigrant communities in America. They had to be delayed from opening up during their peak seasons. So, boxing was significantly impacted at that time.

And in fact, Battling Jim Johnson, who was a very famous, black heavyweight at that time who fought basically everyone. All the avoided black heavyweights of that time, they all fought each other and this guy fought all of them multiple times – as many times as he had to. He fought Sam Langford like 12 times, which is a lot of hard work to do. But he was one of the guys who had died in this. So yeah, the Spanish Influenza would be the closest parallel I would see to the way boxing has been canceled right now.”

On how long the moratoriums on boxing lasted during the Spanish Flu and if that would hold true today:

“Well, the thing that struck me was that fights were rescheduled pretty quickly. I believe Jack Dempsey, one of his fights was postponed against [Battling] Levinsky in early October of 1918. And then it just went on in November instead. That would be very optimistic for boxing today if that was to happen. But I don’t imagine that’ll be the case right now. I don’t think we’ll see fights that were taking place in March happening in April instead. A lot of fights were postponed. There was a New York Times article about this. I was looking up these fighters who were impacted and they would just say, so listen, this thing happened and this (fight) was supposed to happen then (the fight) happened a month later.

So if that happened (today) that would be an amazing situation for boxing. I doubt it. A lot of the reporting that I’ve been doing has just been talking to fighters. Like, what are you doing at this point? Cause imagine these guys, they trained for two months to get in shape for a fight so they can have a great night. And then it all goes. I know me, if I train for like a week, it takes so much dedication just to work out a week straight. But these guys are getting to the peak of their shape and then they have to basically let it go to waste. And then they have to taper down again. They’re in a holding pattern without a fight date.”

On how the COVID-19 pandemic is affecting local gyms:

“I spoke with one of my friends who owns the State of Fitness Boxing Club in North Bergen, New Jersey. And he was telling me the profit margin on a boxing gym is very small. Especially if you want to have a real boxing gym. We’re not talking about one of these fancy places where you charge $100 a session and $250 monthly membership. Those kinds of gyms, they serve a different clientele.

But if you’re talking about a real boxing gym where you want to be able to make your rent and then also be accessible to young people who would have an opportunity to become fighters – I mean you’re really in a delicate spot already. And then you shut the doors. I haven’t seen anywhere where there’s been a moratorium on rents. For instance, there may be a moratorium on evictions. But if a gym or a business is closed for three months and there isn’t rent forgiveness, after three months, okay, well you’ll need three months’ rent now. It’s a very difficult situation for a lot of these gyms.

I spoke with trainers, like Heather Hardy, she’s a trainer at Gleason’s Gym. She was telling me that basically as of last Monday she’s unemployed. She didn’t have income coming in, cause obviously she can’t fight. Her manager told her don’t even think about fighting in 2020. You know, regardless of what happens. And now she can’t go to Gleason’s Gym and workout with her clients. She lives a couple of blocks away from the gym, but the gym is closed. A lot of the Gleason’s trainers, they’re trying to do this thing where they do training over FaceTime on their phone. It’s kind of hard because not every client has the right equipment at home to do what they’re supposed to be doing. So there’s a lot of uncertainty there.”