Franchon Crews-Dezurn: I could have died against Alejandra Jimenez 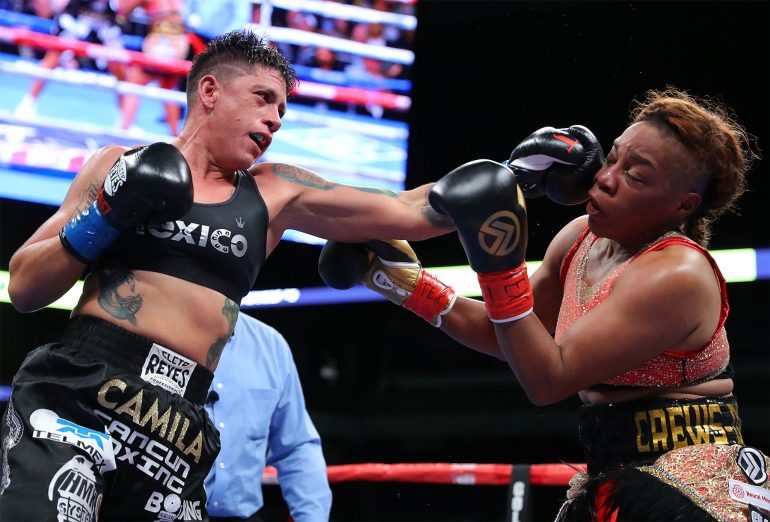 Franchón Crews-Dezurn knew something wasn’t right from the opening bell.

Alejandra Jimenez, a former female heavyweight titleholder initially pulled off an upset 10-round split decision over Crews-Dezurn to claim two belts at super middleweight in January at The Alamodome in San Antonio, Texas.

The World Boxing Organization this week formally stripped Jimenez of her belt after failing to comply with a Show Cause order after twice testing positive for the banned anabolic steroid stanozolol. The ruling, which was handed down on Tuesday, changed the result of their bout to a no-decision and returned the belts back in the hands of the unified champion Crews-Dezurn, who won the crown with a unanimous decision win over Maricela Cornejo last September.

Crews-Dezurn then went on to say that in her 15 years of boxing, she had never felt that much power from a man or a woman — until she faced Jimenez.

“I’ve been hit by strong men (and) the power wasn’t like a man; it wasn’t like a woman, it was different,” Crews-Dezurn explained. “In the second round, I actually got hurt for the first time in my whole career — amateur pro — it’s terrifying.”

Crews-Dezurn (6-1, 2 knockouts), 32, of Baltimore, admitted that it got to the point that she was fighting for her life.

“It was pretty scary because I was fighting for my life; I really could have died.”

“There was no remorse,” Crews-Dezurn said. “This person was going to do whatever they could to get that belt and kill me.

“That’s what you’re supposed to do but knowing she took all these measures to cheat and do the wrong thing; it’s really scary. But I am just blessed — I am very blessed to have my life.”

Oscar De La Hoya, who promotes Crews-Dezurn, was pleased with the WBO’s decision to strip Jimenez.

“Justice has been served,” De La Hoya said in a statement. “The WBO has made the correct decision by reinstating ‘The Heavy-Hitting Diva’ as its super middleweight world champion. Although these things take time, it is always great to see justice in action, especially in the sport that I love the most.”

De La Hoya also sent a message to the WBC, which has yet to formally strip Jimenez of the belt.

“We hope that others follow suit in recognizing her as the champion, and we look forward to her ring return in the near future.”