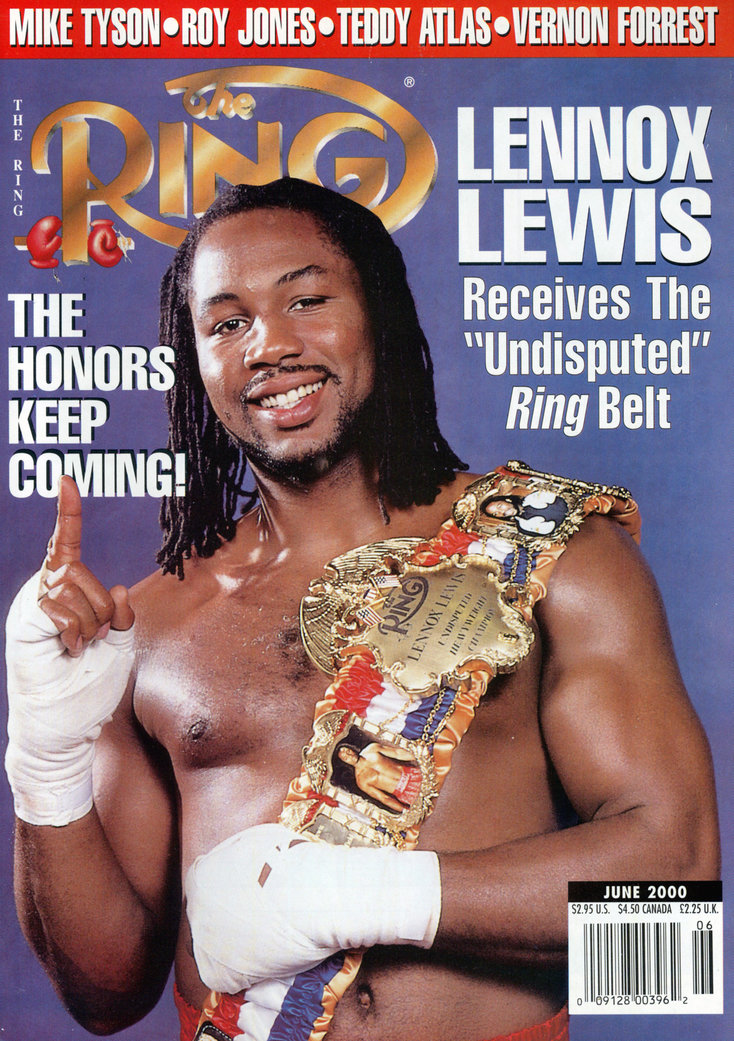 Lennox Lewis was searching for phantoms in April 2000. The Hall of Famer was supposed to be the heavyweight king at the time, though it didn’t feel like it.

That’s because in the myopic minds of many, he wasn’t.

Lewis still had not conquered the ghost of heavyweight champions past—Mike Tyson. Even though he beat the man who beat Tyson, Evander Holyfield, twice—most believe. Still, doubts loomed over a champion who seems to be far more appreciated 17 years after he threw his last punch than he did when he was punching.

So, in early 2000, Lewis and his people received a call. It was Michael Grant’s team about a fight, possibly in April 2000, at New York City’s Madison Square Garden—the spectral venue of dubious decisions past.

It’s what led to “Two Big,” the first fight of the supersized era. It set a new standard for combined heights and weights for a heavyweight title fight (since exceeded on March 24, 2001, by the first 500-plus pound world title fight between Wladimir Klitschko at 246 and Derrick Jefferson at 260¼ (506 ¼ pounds combined); and in the combined height of 13 feet, 6 inches by the Nikolay Valuev-Jameel McCline WBA title fight on Jan. 20, 2007). 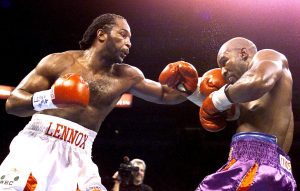 Lewis on the attack against Holyfield in the rematch. Photo by Jeff Haynes/AFP via Getty Images

Five months before Grant’s challenge, Lewis had rectified one of the great wrongs in boxing history when he beat Holyfield in their rematch in November 1999. The sports world was rocked when Lewis and “The Real Deal” fought to a split-decision draw in their first fight, March 13, 1999, when inexperienced judge Eugenia Williams got flustered and infamously gave Holyfield the nod, 115-113, and judge Larry O’Connell somehow saw it a 115-115 draw.

Yet, two at ringside didn’t see it that way.

“I got robbed,” Lewis righteously blared before storming from the ring. “I controlled the entire fight. I felt I won the fight hands down. It was my time to shine and they ripped me off.”

The Associated Press card favored Lewis, 117-111. HBO’s “unofficial” ringside judge, the late Harold Lederman, also scored it 117-111, as did a Ring Magazine Associate Editor sitting in the auxiliary section. HBO Hall of Fame blow-by-blow Jim Lampley was so angry afterward his face was fire red when he left the Garden that night, blurting out in frustration, “This is a disgrace!”

Ironically, Bowe soon lost that distinction when he refused to fight Lewis for the WBC title. Bowe wanted no part of Lewis, who beat Bowe for the gold super heavyweight gold medal at the 1988 Seoul Olympics. 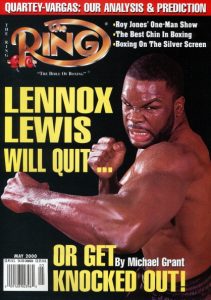 This all set the stage for Michael Grant, trained by Don Turner, Holyfield’s trainer for his two victories over Tyson and his fights against Lewis.

Grant was considered the prototype heavyweight “of the future.” He was large, athletic, with a genial personality and not a lot of wear-and-tear on his body, like most fighters attain through years of sparring and gym wars. Lewis, for some reason, was not as embraced by fight fans and crossover media as he should have been. He was approachable, cerebral, though lacked the kind of exciting spark Tyson, Bowe or Holyfield provided. Lewis was too smart to engage in the life-and-death attrition fans clamored for, and consequently, was labeled “boring.”

Grant and Turner thought that they saw a weakness in Lewis. They thought they could exploit Lewis’ suspect chin. They also had size on their side. Grant was 27 at the time, a lithe 6-foot-7, with an 86-inch reach, and weighed 250 pounds. Grant came into the fight with a 31-0 (22 knockouts) mark. Lewis was 34 at the time. He is 6-foot-5, weighed 247, with an 84-inch reach. Lewis was also 35-1-1, with 27 knockouts, and an Olympic gold medalist with an 85–9 amateur record. Grant had just 12 amateur fights. His biggest amateur achievement was reaching the 1994 national Golden Gloves semi-finals, where he lost to Jefferson.

“I really had to wonder what they were thinking taking the fight,” said Lewis, recollecting. “Really, what the hell where they thinking. I was shocked they took it. I thought to myself, ‘These guys really think Grant can beat me?’ Was it based on his size? What do they see that’s beatable? Or is he better than I thought? I really thought that.

“Then, I saw Holyfield was around him and I saw Holyfield walking into the ring with Grant that night. But I knew what was hanging over me. I still couldn’t understand why I was being underestimated. I had an extensive amateur career, and Grant had hardly no amateur career. I wasn’t appreciated. The fighter everyone still had in their minds was Tyson.

“They didn’t want to see me. I’m still there and the boxing world couldn’t deny me. Tyson didn’t want to fight me, and even pay me to go after Evander Holyfield, thinking he was the easier fish. Everyone at that time sidetracked me to go after someone else. We know Tyson made a mistake, because if you remember, Holyfield was supposed to be finished. People thought Tyson would kill him. We know what happened next.

“I wanted to get rid of the misfits, and Tyson was a misfit at the time. I didn’t want to go through history and people questioning, ‘Tyson would have done this; Holyfield would have done that to Lennox Lewis.’ There is a reason why the Grant fight happened. No one wanted to fight me.”

A week after Lewis beat Holyfield in November 1999, Grant had his signature victory over Andrew Golota, in which Grant got up twice from first-round knockdowns to force Golota to quit in the 10th after he was knocked down.

“I knew Grant didn’t have enough experience, while I had more in the bank than he had,” Lewis recalled. “I actually went into the Grant fight super confident, but not too over confident. I thought I would control the ring, but you remember Grant came out and tried to control the ring. He came after me. If he wanted to be the bull, I could be the matador.

“I was really shocked Grant came after me like that. That was Don Turner telling him to do that. They thought I was weak. I have no idea where that idea came from. I still thought that I had some things to prove. After I beat the great Holyfield, they were throwing this kid at me? What was going to prepare him for me? There was no way he was going to beat me.

Lewis was at a stage in his career where he didn’t need any belts. A stipulation he had in the Holyfield rematch was the winner would fight the WBA mandatory, which was John Ruiz. Lewis had Tyson in his sights. 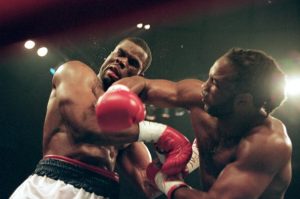 “The way he attacked me, Grant really led to his own demise,” Lewis said. “The first knockdown was set up by an uppercut, and then I followed with a right off his head, which I think I remember hitting him in the temple. Grant was 6-foot-7, but build more like a basketball player. Anyone who is taller has leverage and he didn’t use any of it.

“He kept making the big mistake big guys shouldn’t do—he leaned down. When he leaned down, I knew I could land the uppercut. No one stressed to him to use his height. It was a situation of knowledge. I was the smaller guy. But I was the bigger fighter. He didn’t play the patient script. He tried to catch me with a big right hand, but many people fell on their sword trying to hit me with a big right hand. I had to be patient.

“He lasted two rounds with me, but if he didn’t do what he did, he may have lasted four of five rounds.”

Lewis knocked down Grant three times in the first round. In the first minute, Grant landed a good right, which had Lewis backing up to the ropes. Grant’s pressure and a left to the body even had Lampley remark, “He’s a better, more effective body puncher than Lewis.” The narrative changed quickly. At 1:42 of the first, HBO color analyst pointed out, “There’s already a little blood coming from the mouth of Lewis.”

With 1:26 left in the first, Lewis twisted to create torque on a crushing right uppercut, followed by a right on Grant’s left temple. The Garden crowd roared as Grant laid supine on the canvas. Grant rose when referee Arthur Mercante Jr. reached eight. With :58 left in the first, Lewis cuffed Grant on the neck with a left while he pounded him with his right, and Grant stumbled back into the corner, his eyes literally rolling back into his head. Though he didn’t touch the canvas, Mercante rightfully called it a knockdown and reached eight with :45 left.

It wasn’t enough time for Grant to escape. 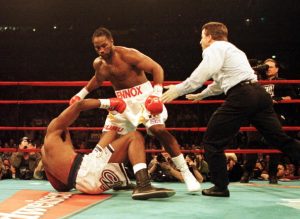 One of Lewis’ first-round knockdowns against Grant. Photo by Al Bello/ALLSPORT

Lewis dropped him a third time with a devastating right to the chin, causing Grant to crumble like a erector set in the corner with :11 left. The HBO broadcast team of Lampley, Merchant and George Foreman had Grant finished—and he actually was. Once Grant got back to his corner, Turner implored him to “use your legs, man; hear what I said, you gotta use your legs, man!”

Grant had no legs. Lewis’ power short-circuited them.

In the second, Lewis started by attacking Grant. The lanky Grant lasted 173 seconds. With 1:19 left in the second, Lampley notes, “Grant is beginning to get his senses back.” Lewis, very adroitly once again, cuffed Grant around the back of his head with his left, with Mercante positioned to the right of the fighters, and pounded Grant again with a series of uppercuts. After a missed Lewis jab, Grant with nothing left leaned down, and Lewis winged another right uppercut that dropped Grant for good.

Mercante reached nine as Grant struggled to his feet and wisely stepped in and waved it over.

Foreman pointed out that Lewis “was holding (Grant),” when Lampley dropped in, “Absolutely right, got away with holding the head while he landed the uppercut.”

Foreman followed with, “Grant should have not have been down there.”

Foreman also stressed that Grant “did a foolish thing, he attacked this heavyweight champion.”

Lampley deemed the Lewis victory over Grant as “the most explosive showing of his career.”

He would solidify his place in heavyweight championship lore by vanquishing the dodging ghost—Tyson.