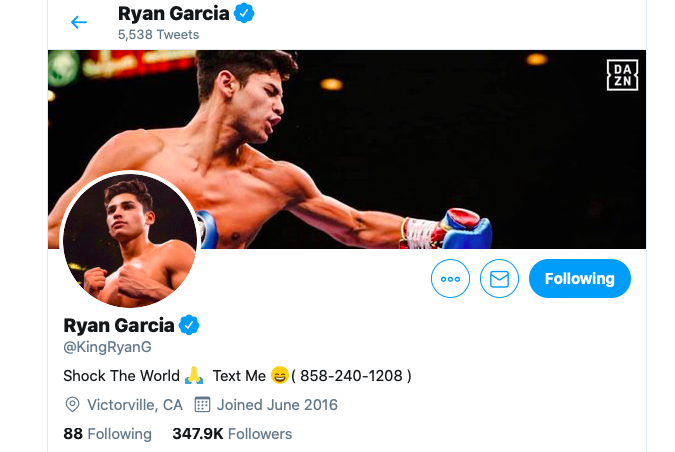 We all are in wait and see mode, inside boxing and pretty much everywhere.

In California, “King” Ryan Garcia knows that CA Governor Gavin Newsome on Sunday shared that bars, nightclubs, wineries, brew pubs “and the like” should close, while restaurants, he said, should halve their capacity and keep customers far enough away so that sneeze droplets don’t carry.

The Mayor of Los Angeles, Eric Garcetti, ordered movie theaters, gyms, fitness studios and other retail businesses to shut down until at least March 31.

And in Maryland, Baltimore native Gervonta Davis has too been affected by the world tilting off axis, because of this viral scourge. Governor Larry Hogan issued an executive order Monday that all bars, restaurants, movie theaters, and gyms in the state must temporarily close as a public health measure to slow the spread of COVID-19. The measure is effective at 5 PM Monday.

So, we wait…we adapt. We try to make sense of something that none of us have ever had to wrestle with. And we adapt in different ways. Fighters, it’s not like most of them can switch off their fighting instinct.

Ryan Garcia, you can sense he’s chomping at the bit, he’d like the coronavirus lock-down to run its course as quick as possible, so he can get to work. You saw the fire from the Twitter post from “King Ry:’

He knows it, he knows that Vegas, Cali, New York, all the big fight sites are not in a mode to put on prize fights. Options are being considered, we know that Top Rank and Bob Arum are looking at doing studio shows, with no fans present, so those can be streamed and shown on TV to patrons. So, he’s staying in shape, and not relaxing his competitive instinct.

The WBA world lightweight crown holder Davis (23-0, with 22 KOs) he countered, soon after: 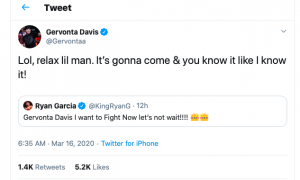 And Garcia, the 21 year old who holds a 20-0 (17 KOs) record and the WBC silver lightweight crown, responded:

Bottom line, Garcia is pretty much feeling like most of us…We want a restoration of normalcy, to get back to “regular” life. It will happen, fights like this one will get made…but no, nobody right now can say when