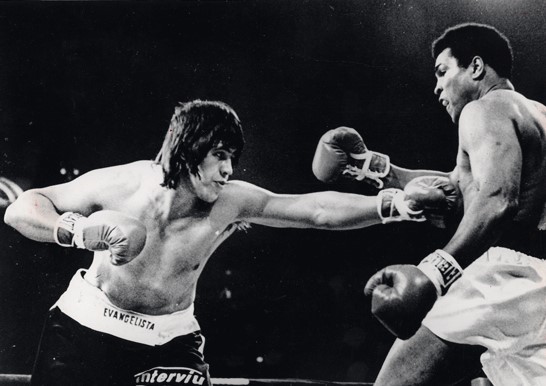 Evangelista (left) jabs to the body of Muhammad Ali. Photo by UPI
16
Mar
by Anson Wainwright

Alfredo Evangelista was a durable contender in the heavyweight division during the second half of the 1970s into the 1980s. This two-time European champion twice challenged for the world title against legendary greats Muhammad Ali and Larry Holmes.

Evangelista was born in on December 3, 1954 in the Uruguayan capital, Montevideo. His early years were a struggle because of the economic and political unrest in his homeland.

“They were very hard days, I was hungry most days,” Evangelista told The Ring through Oscar Zardain. “We were living under a military dictatorship and it was very difficult.

“I used to pick up some fruit and drink oats with water because we didn’t have money for milk. My childhood was very tough and I think that’s why I started boxing.”

“My father started to teach me because I was living most of the time on the streets,” he explained. “I needed to know how to fight. I started in a real gym at the age of 15.”

Evangelista didn’t have a long amateur career. He estimates that he had just 14 or 15 fights, winning them all, but it was vital for him to go overseas and gain experience.

“I won the South American championship in Brazil and the Press championship back in Uruguay,” Evangelista recalled.

“When I was amateur I spent some time in Argentina as an immigrant. I was working but also training. I used to train at Luna Park and also in the Argentine Federation gym. Once there, somebody paid attention to me and I was invited to work as sparring partner for Victor Galindez. He was training for the [vacant WBA light heavyweight] world title against Len Hutchins [in December 1974], which he won.”

Evangelista then recieved a call from a friend who informed him that he could go professional in Spain.

“They were looking for a good fighter to invest some money in him and make a good career,” Evangelista explained. “I was hungry in Uruguay, so I packed up and left my family. When I made the pro debut everybody was amazed with me. They nicknamed me ‘The Little Clay.'”

The burly South American made his bones over the first 19 months, losing only to Italian spoiler Lorenzo Zanon in an eight-rounder.

Evangelista was 14-1-1 when he received a life-changing call to face Ali for the undisputed heavyweight championship in Landover, Maryland in May 1977.

“I was young and strong and he was old at this time,” he remembered. “But he was very intelligent; he knew how to handle the fight. He was special, a legend. He made me famous around the world and I will always be grateful for that.”

The vastly experienced Ali, although 35 and long past his prime, knew too much for the 22-year-old challenger. “The Greatest” prevailed via 15-round unanimous decision.

However, the experience proved to be a great learning curve for Evangelista, who got off the canvas to knock out Lucien Rodriguez in 11 rounds to claim the European title later that year. 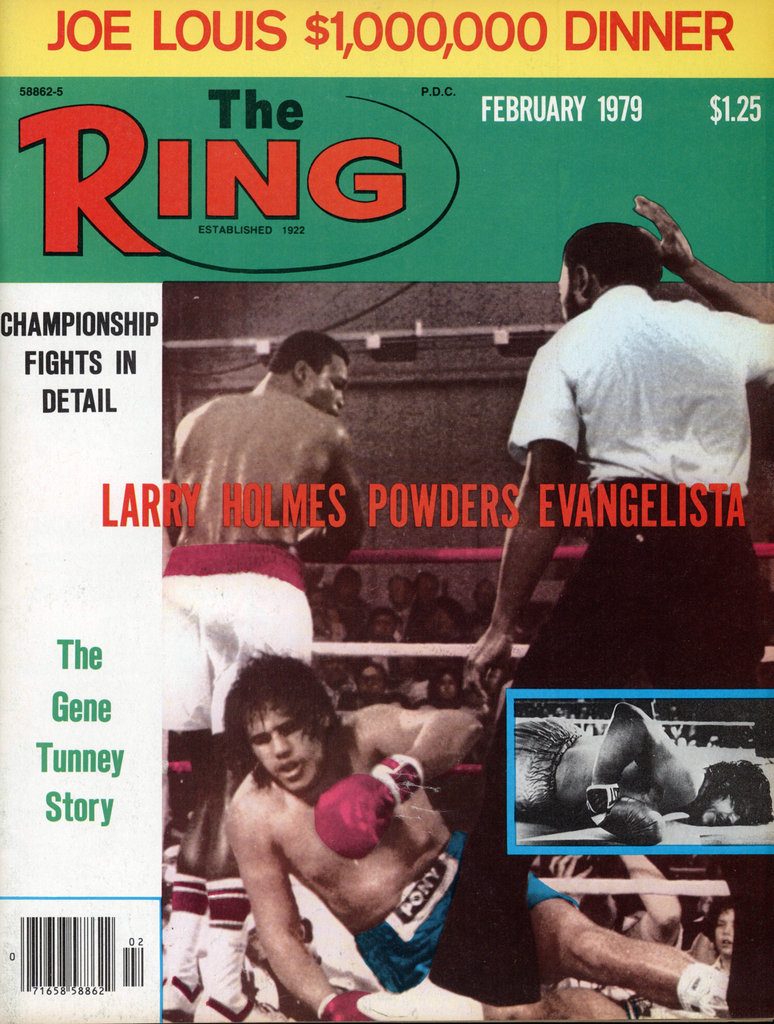 He made two defenses of the title, knocking out another former Ali opponent Jean Pierre Coopman (KO 1) and edging rugged British stalwart Billy Aird (UD 15). He was then positioned to face Holmes in Las Vegas in November 1978.

“I was training in Los Angeles with Roberto Duran,” Evangelista said. “Roberto was recording the famous scene in Rocky 2 when we see a jacuzzi. This was the first time in my life that I had seen one (laughs). I didn’t take the correct measures after the bath and was very sick. I shouldn’t have fought against Holmes. I was very sick with Otitis (a strong ear infection), taking pills and antibiotics.

“We call [promoter] Don King a week before the fight and he told me in a threatening voice, ‘If you don’t fight against Holmes, you never will fight again for a world title’ What could I do? Holmes beat me. I could fight the early rounds but in the seventh I was dead [and was stopped]. I am not proud about my performance, but this is the truth. This was Holmes’ first defense. We will never know what could have happened if I had been 100-percent.”

Evangelista defended his European title twice more before he was out-hustled by old rival Zanon. Over the next couple of years the Spanish-based fighter won some low-key fights but was stopped by Leon Spinks (KO 5) and Greg Page (KO 2) when he moved up to world level.

He continued his career, and although he lost to Rodriguez for his old European title, Evangelista stayed relevant by outpointing the heavy-handed Renaldo Snipes in September 1983. He won the European championship back, stopping Andre Van Den Oetelaar (TKO 5) in January 1987 but lost it to Anders Ekland (KO 7) in his first defense.

Looking back on his career he is happy with his achievements in the heavyweight golden era. 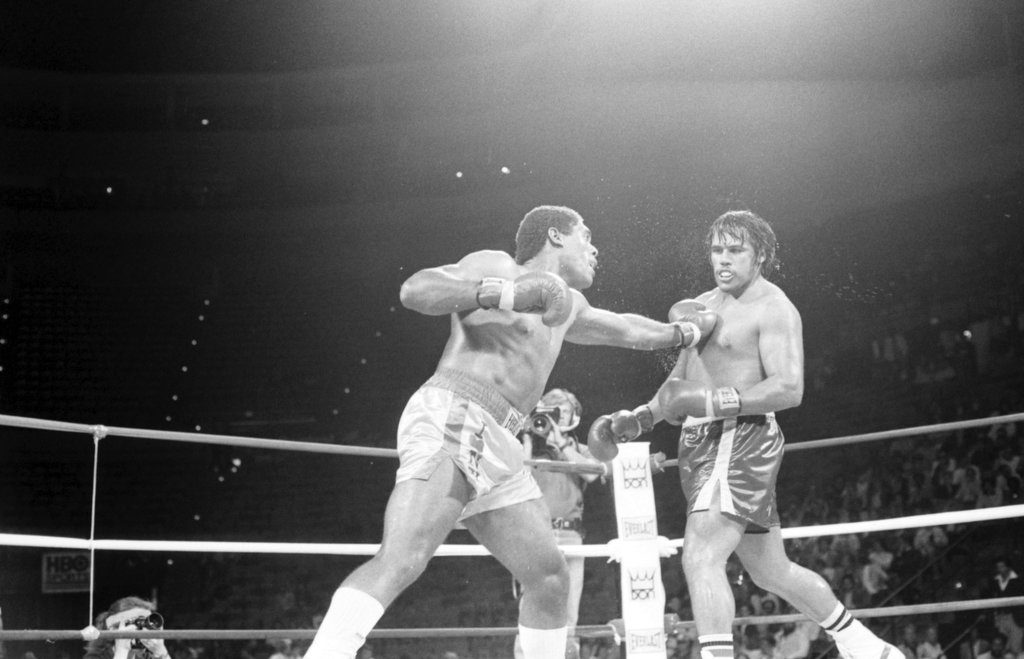 “I fought in the best heavyweight era of all time,” Evangelista said. “I know that in this era I would be world champion for sure. Look at this Mexican guy, [Andy] Ruiz, he lost on points [to Anthony Joshua] in a horrible performance. He was the heavyweight champion for just six months. I fought against Holmes, Ali, Page, Leon Spinks, Snipes, Coetzer. We never will see anything like that again.”

Evangelisa, now 65, is married and lives in Zaragoza, Spain. He has two children with his first wife and another by his current wife. He lives off his pension and helps young boxers at a local gym. Two of his brothers also live in Spain and he enjoys spending time with them.

The two-time world title challenger graciously took time to speak to The Ring about the best he fought in 10 key categories.

BEST JAB
Muhammad Ali: No doubt about it. Larry Holmes had a good jab too, but Ali was the best.

BEST DEFENSE
Ali: He made mistakes like everybody, but he was the smartest in this aspect – very difficult to hit.

FASTEST HANDS
Ali: The left hand was invisible. He wasn’t a slugger, but he was crushing you with the speed.

BEST FOOTWORK
Ali: When I fought Ali he was old, but he still had amazing footwork.

BEST CHIN
Larry Holmes: I hit him with some good punches and he didn’t blink.

SMARTEST
Ali: Ali was untouchable; his face was perfect. He was the smartest in boxing history. He beat you at the weigh-in, he beat you at the press conference, he was an incredible athlete.

STRONGEST
Renaldo Snipes: He was an animal, a beast. I beat him by split decision in Cleveland after 10 hard rounds.

BEST PUNCHER
Snipes: He could hit you harder than Larry Holmes. He was a horrific puncher.

BOXING SKILLS
Ali: Ali was the most talented fighter ever. He was like [soccer player Lional] Messi in those days, other fighters were very good, but he is different.

BEST OVERALL
Ali: What can I say? Ali left a mark on me for all my life. He revolutionized boxing and sport in general. He was a very special person.

Oscar Zardain helped co-ordinate and translate this feature. The Ring appreciated his assistance.