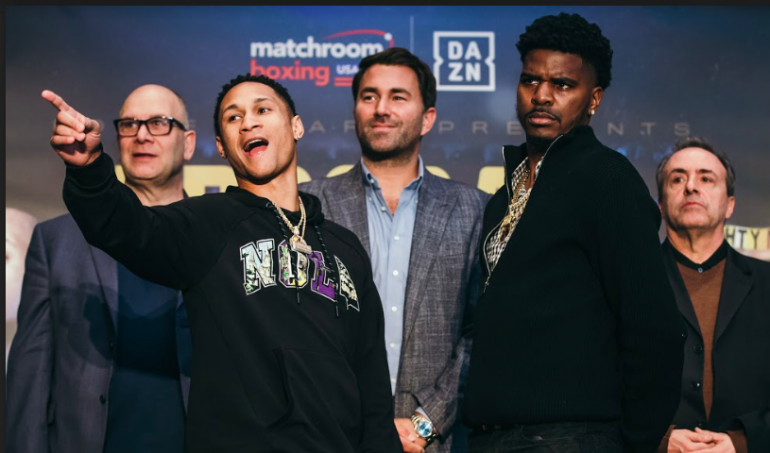 Promoters DiBella and Hearn sandwich Prograis and Hooker on Thursday. This moment was fun-filled, fight night won't be so jocular for the rumblers. (Photo by Amanda Wescott)
15
Mar
by Ryan O'Hara

A bout between two former junior welterweight champions is the next to fall victim to the cancellation bug due to the coronavirus pandemic.

However, BoxingScene.com’s Manouk Akopyan has reported that the bout has been canceled.

“This situation continues to evolve and will escalate rapidly and dramatically,” said Governor Hogan told ABC News in a statement. “These are unprecedented actions in an extraordinary situation, but they could be the difference in saving lives and keeping people safe.”

Rescheduling the match could prove to be difficult as the Centers for Disease Control and Prevention (CDC) recommended Sunday that events with 50 or more people be canceled or postponed for the next eight weeks. This could also affect the bantamweight unification bout between Naoya Inoue and John Ariel Casimero, which was initially slated for April 25 at Mandalay Bay in Las Vegas, and the super middleweight title match between superstar Canelo Alvarez and titlist Billy Joe Saunders.

Prograis and Hooker were slated to meet at a catch-weight of 143 pounds. Both fighters are coming off losses.

Prograis dropped a majority decision to unified 140-pound world titlist Josh Taylor in a fight of the year candidate in the final of the World Boxing Super Series in October.

Hooker was making the third defense of his junior welterweight belt and was attempting to become a unified champion when he faced 2012 Olympian Jose Ramirez in Dallas in June. But in the sixth round of a competitive fight, Ramirez badly hurt Hooker with a left hook and blitzed him until referee Mark Nelson halted the fight.