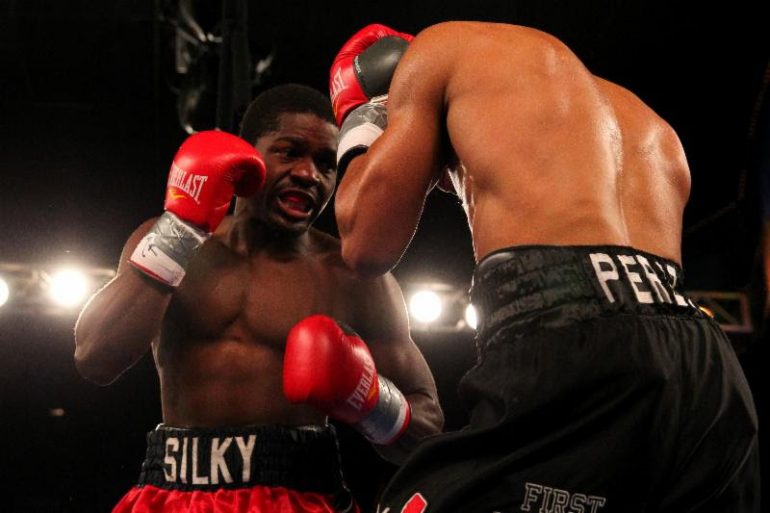 Wilky Campfort, seen in a 2014 fight against DeCarlo Perez
15
Mar
by Francisco Salazar

Reyes, who has fought most of his pro bouts in the Tampa area, entered Saturday’s bout having won his previous six bouts by knockout, with only one of those victories coming against a fighter with a winning record.

The 36-year-old Punalef was considered a significant step-up in opposition, even though he had lost to the likes of Jack Catterall, Mauro Godoy and Armando Alvarez.

The southpaw Punalef utilized effective ring generalship, making Reyes swing and miss at times during the opening round. Reyes began timing Punalef during the second round, and a sweeping left hook to the head dropped Punalef to the canvas towards the end of round 2. Punalef beat the count and made it out of the round.

Reyes was effective in cutting off the ring and forcing Punalef to engage more in the center of the ring during round 3. Midway through the following round, a straight right hand to the head dropped Punalef to the canvas. Punalef beat the count, but looked to his corner, pointing to his right shoulder as if to say he had injured it. Referee Dennis DeBon decided to stop the fight at 1:56.

Punalef, who resides in Buenos Aires, Argentina, drops to 24-11-5, 9 KOs. He is now winless in his last six bouts.

Olah was game early on, but was in survival mode by round 3. Olah utilized lateral movement, but Campfort dug left hooks to the body, forcing Olah to hold. As the bout progressed, Olah’s punch output dropped significantly, likely from the accumulation of punches Campfort landed.

Campfort stunned Olah twice during the final round, but was not able to follow up as Olah grabbed onto Campfort. Olah kept his distance, doing just enough to survive until the final bell sounded.

In junior featherweight action, Brian Cannady of Fort Myers, Florida stopped Mexico’s Jorge Careaga in the opening round to improve to 10-0, 6 KOs.

Moments after the bout began, a left hook to the head stunned Careaga. Moments later, a right cross to the head dropped Careaga to the canvas. Careaga beat the count, but a barrage of punches from Cannady dropped Careaga again in a corner, prompting referee Dennis DeBon to stop the bout at 31 seconds.

Midway through the second round, Willis hurt the southpaw Lorenzo (3-28, 1 KO), sending him reeling in a corner. Willis battered Lorenzo until referee Emil Lombardi, Jr. stopped in to stop the bout at 1:49.

Junior bantamweight Jose Ocasio of Ocala, Florida improves to 5-1, 5 KOs by stopping Detroit’s Austin Lajiness (0-8) at 1:42 of the opening round. Ocasio dropped Lajiness (0-8) twice before the fight was stopped at 1:42.

Lightweight Julio Solis of Tampa improved to 3-0, 3 KOs by stopping Chicago’s Earnest Walls (0-6) at 1:29 of round 2. Solis dropped Walls twice before the fight was stopped at 1:29.

In a clash of junior middleweights from Puerto Rico, Angel Ilarraza defeated Harry Cruz (1-1) by majority decision. One judge scored the bout 38-38, while the other two judges scored the bout 39-37 for Ilarraza, who was making his pro debut.

In junior bantamweight action, Ricardo Caballero stopped Shaquille Harris (0-5) of Wilson, North Carolina at 1:02 of round 1. Caballero, who resides in Riverview, Florida, goes to 4-1, 2 KOs.

In lightweight action, Jean Guerra Vargas of Tampa defeated Brazil’s Marcello Williams (0-4) by unanimous decision. All three judges scored the bout 40-36 in favor of the 19-year-old, who improves to 2-0.