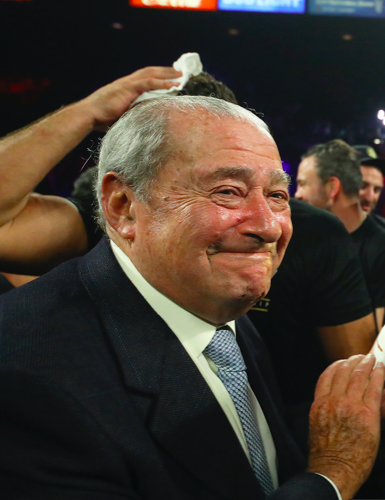 Two shows in NYC were postponed, and boxing reeled...but Top Rank, and US citizens, were happy to hear that faster testing for COVID-19 has been okayed by the FDA. (Photo by Mikey Williams)
13
Mar
by Michael Woods

The fights to take place at Madison Square Garden’s Hulu Theater on Saturday quite likely could have occurred if the Trump administration had done the right thing and secured testing kits, says veteran fight promoter Bob Arum.

Top Rank’s executives met with officials from the New York State Athletic Commission, the Hall of Fame deal-maker said. With no kits available to test all the fighters it would not be prudent to have the fights go on, that was the determination made.

Arum said he’s disappointed, very much so for the fighters, who trained so long. And the ushers at the arena, etc., etc., it is a shame to pull the plug. But it was the wise move, Arum said, to scrap the March 14 affair, and the March 17 St. Paddy’s Day party, topped by Irish star Mick Conlan raising his fists to the delight of a house packed with joyous rooters bedecked in kelly green. 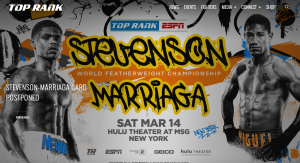 That image went by the wayside, with the invasion of the odious COVID-19, catalyst for a pandemic that has, literally, messed with the whole world.

The promoter, 88 years old and defiant as hell, mischievously offering that maybe it is his intake of reefer which helps keep his immunity top grade in a SiriusXM hit, said he will speak to the powers that be at ESPN, about setting up events. They would be events with no fans present, in April. As long as the fighters get tested before, it should be OK to have the combatants scrap, he said.

The promoter went on the Ak and Barak show, on SiriusXM, and blistered Trump, for dropping the ball on the virus. He also told the hosts that yes, he’s checked around on securing a partner, to inject capital into Top Rank, to aid them in growing, opening offices outside America. Yes, he told them, he’s open to that, not selling outright, and didn’t dismiss listening to and entertaining a collaboration with the people who run DAZN, a Top Rank rival.

But back to the present.

On Friday afternoon, Arum told me that he is a bit upbeat, in that he’s seeing maybe bluer skies regarding the dreaded C-word virus, and the nation getting a firmer handle on the spread of the rampaging virus.

“If the news is right, the news on Bloomberg, about the FDA approving testing that gets results in about four hours, then that helps things,” he said.

Indeed, word came out Friday afternoon of a ramp up in testing capability, with Roche boasting screening options that could be ten times faster than what has been used in America. “So, we will be working with UFC, they are in the same boat.  ESPN needs content, with basketball being cut off,” Arum continued. “So maybe we have content Friday, Saturday, Sunday afternoon.” There would be an upsurge in MMA programming as well, then, if that scenario plays out.

Arum has not been shy about savaging Team Trump, for not getting out ahead of the issue, when it became clear that this virus was transmitting quickly and that the lethality rate was far and away worse than the flu. “But, if this news is true, on testing, then it could help things.” And that means replacement gigs, for standouts like featherweight pound for pound riser Shakur Stevenson could materialize sooner rather than later.  What’s the next step? “We will be meeting with UFC,” Arum said,  “and Bob Bennett, of the Nevada commission.”

Yes, seems like an unexpected byproduct of the viral surprise attack on the sports world could be this: a greater availability of fight sports on a streaming screen near you.

Theater of the unexpected, as ever.

Listen to the Everlast TALKBOX podcast, hosted by Michael Woods, if you like. Guests on show No. 201 are RING Mag editor in chief Dougie Fischer (talking Canelo vs BJ Saunders), Kathy Duva, CEO of Main Events (speaking on next for Sergey Kovalev), and NY Times reporter Ali Watkins, touching on the diminishment of pro boxing in New York City.