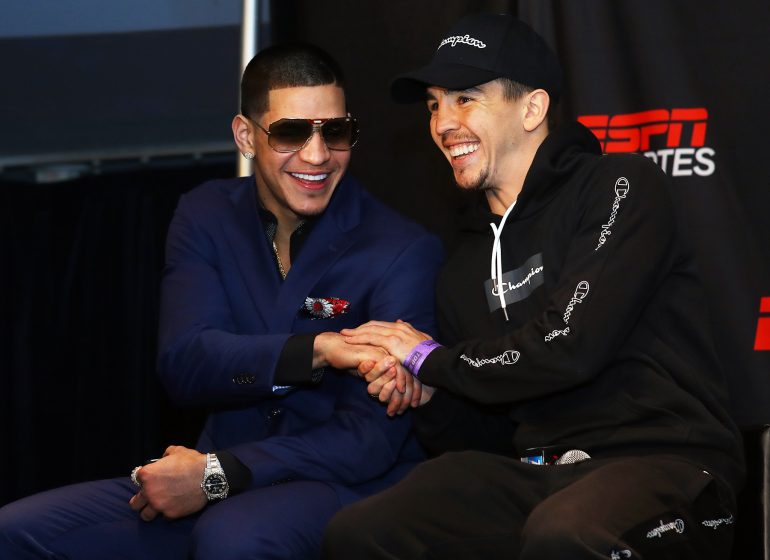 Edgar Berlanga (L) and Mick Conlan (R) were scheduled to fight on separate cards in NYC over the next few days, but both have since been postponed. Photo by Mikey Williams/Top Rank
12
Mar
by Ryan Songalia

NEW YORK — The two upcoming boxing cards scheduled for Madison Square Garden’s Hulu Theater have been “postponed” due to concerns over COVID-19.

The cards, scheduled for this Saturday and Tuesday, were to be headlined by Shakur Stevenson’s first defense of the WBO featherweight title against Miguel Marriaga, and Mick Conlan’s traditional St. Patrick’s Day appearance, respectively, but have now been put on pause.

“After close consultation with the New York State Athletic Commission, it has been determined that Saturday’s and Tuesday’s events cannot proceed in light of the ongoing Coronavirus crisis. Top Rank will work with the Commission to reschedule the events as soon as it is safe for all involved,” read a company press release.

The news comes the same day that Top Rank announced that the cards would go on as planned, just without spectators, and only essential production and support staff, plus fighters and their teams, and credentialed media being allowed in the venue.

Conlan voiced concern to The Ring that none of the fighters were being tested for the virus, and a Top Rank source said that matter would have to be handled by the commission.

“The last thing you want to do is contract this virus and then be quarantined in the U.S., I have a young family at home. It’s a bit scary,” said Conlan (13-0, 7 knockouts), who lives in Ireland and trains in London with Adam Booth. He was scheduled to fight Belmar Preciado in a ten-round featherweight bout.

“The only thing I’m concerned about is getting home after, and making sure I don’t have any coronavirus. I have two young kids so I want to get back to see them. I don’t want to be stuck in a foreign country or stuck in a hospital.”

Earlier in the day, New York City Mayor Bill de Blasio declared a state of emergency, while New York Governor Andrew Cuomo banned gatherings of over 500 people. De Blasio stated Thursday morning, “All of our largest venues will now no longer have gatherings until such time in this crisis as it’s acceptable to do so. I unfortunately suspect that will be a number of months. So places like Barclays, Madison Square Garden, Radio City will obviously not be operating.”

The Mayor’s deputy press secretary confirmed to The Ring that even empty-arena events, like the two Top Rank cards, would be included in such a prohibition.

“The health and safety of the fighters and their teams, and everyone involved in the promotion of these events, necessitated taking this step,” Top Rank’s statement continues.

Full refunds for both events are available at the point of purchase.