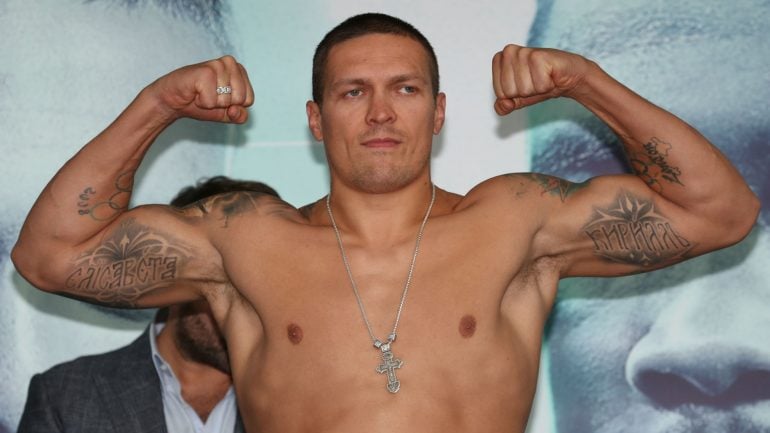 The 12-round heavyweight bout will take place at the O2 Arena in London, England and will stream live on DAZN in the United States and Sky Box Office in the United Kingdom.

Usyk (17-0, 13 knockouts), who is originally from the Ukraine and now trains in Oxnard, California, was penciled to return to the ring earlier this year, but another injury to his right bicep delayed his return.

After unifying the cruiserweight division with a victory over Murat Gassiev in 2018, the 33-year-old made his heavyweight debut on October 12, stopping Chazz Witherspoon after the seventh round.

Already the mandatory challenger to face WBO titleholder Anthony Joshua, Usyk believes he is ready to face the top echelon of the division but is not overlooking Chisora.

“Boxing in Manchester in 2018 was an amazing experience, now I get to do it in London at the famous O2 Arena, said Usyk, who is fighting for the second time in England, following his TKO victory over Tony Bellew in November of 2018 in Manchester. “I can’t wait to fight in front of the British fans once again. As a cruiserweight, I reached the highest heights as undisputed champion and now I am following the same path as a heavyweight.

“I expect a real test in Chisora. He is strong, tough and resilient. I recall being an amateur and watching his fight with Vitali Klitschko. It seemed so big and far away. Now I am myself taking a fight against Chisora. I am working hard in my training camp to show a spectacular performance on May 23.”

Chisora (32-9, 23 KOs) will fight again at the O2 Arena, where he has fought on seven previous occasions.

The London resident is coming off a fourth-round knockout victory over David Price in his last bout on October 26. He has won his last three bouts since losing by knockout to Dillian Whyte in December 2018.

The 36-year-old has made for action fights against the likes of then-WBC heavyweight titleholder Vitali Klitschko, plus Tyson Fury, David Haye and Kubrat Pulev, all of whom he lost to. Chisora is hoping to build off the momentum of recent fights and believes he can pull off the upset win over Usyk.

“Usyk reckons he can step up and survive with the big boys. He may be the undisputed cruiserweight champion of the world, but on May 23, he will find out what it feels like to be hit by a real heavyweight. He is coming to my backyard, I’m going to remind him exactly why he hid in the cruiserweight division and also get revenge for my boy, Tony Bellew. This will be war!”