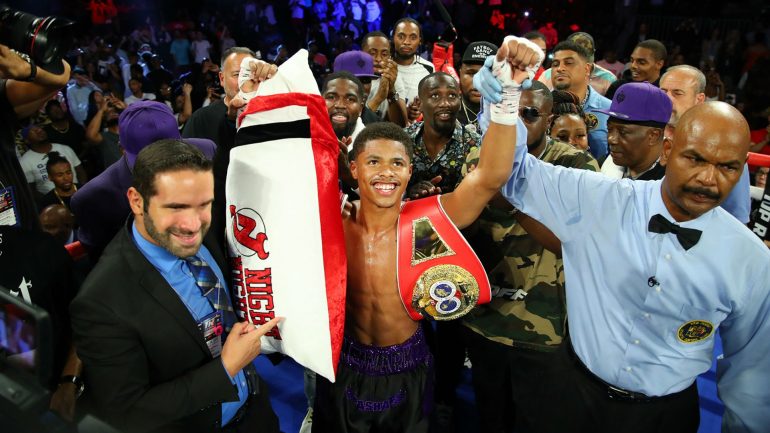 Stepping back and looking from a broader scope, it’s a little hard to believe that Shakur Stevenson has only had 13 professional fights. He’s 22 years old and when he’s between the ropes, he carries himself like a grizzled veteran of 40 fights. He had fast, educated hands, which goes well with his fast, educated feet.

What’s more is that the complete version of Stevenson is still being molded.

Another step in that process will come Saturday night when the WBO featherweight titlist faces Miguel “Escorpión” Marriaga at the Hulu Theater at Madison Square Garden on ESPN/ESPN Deportes (10:30 p.m. ET/7:30 p.m. PT).

Stevenson (13-0, 7 knockouts) claimed his first major belt by pounding Joet Gonzalez last October to win the vacant title. This will be the fourth try at a world title for Marriaga (29-3, 25 KOs). He failed in three previous title attempts against Vasiliy Lomachenko, Oscar Valdez and Nicholas Walters.

And though Marriaga is carrying a four-fight kayo streak into this tilt, Stevenson vows he will have no problems handling him. That’s because he continues to evolve.

“I think everything works for me right now, and I have had a lot of good sparring days, and a lot of that stuff will come into play on Saturday,” Stevenson said. “I’m doing a lot of body work and a head movement. I want to put on a good shows for the fans. I know the first few rounds I’ll have to be very aware of what’s going on and start beating him up.

“I feel like I’m getting better. From last year, I feel like I am evolving. I know a lot about myself right now. I will say that I more patient. Things have slowed down for me. A while ago, I used to tell myself to be patient, because I started out so fast. It’s something that I was trying to focus on. There are higher levels that I can reach. I feel like as fights go on, people do have to realize that I’ve only fought 13 times, and it’s why I feel that I am getting better and better.

“The world will see a different Shakur Stevenson.”

Stevenson is aware that Marriaga is a hard-puncher, but he also feels Marriaga will be the one who Stevenson will chase.

“He will try to flip the script and try to run me into something big,” said Stevenson, who is aiming at two more fights before the end of the year, possibly one against IBF beltholder Josh Warrington. “I’m too smart for that. I’m fully prepared for it. He thinks he’s going to show me something different. He isn’t.”