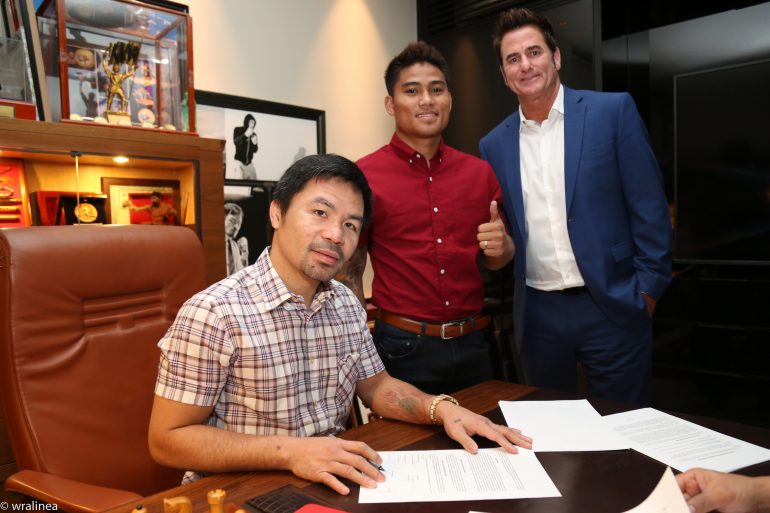 Featherweight contender Mark Magsayo has signed a promotional deal with MP Promotions, the company announced Tuesday. The deal includes a partnership with TGB Promotions, which promotes many of Premier Boxing Champions’ shows.

The 24-year-old Magsayo (20-0, 14 knockouts) of Tagbilaran City, Bohol, Philippines had been in promotional limbo for the previous two years, but now joins other young Filipinos like Reymart Gaballo, Marlon Tapales and Jhack Tepora with the Manny Pacquiao-led company.

“I am very thankful for this opportunity that [MP Promotions president Sean Gibbons] and idol [Manny Pacquiao] gave me,” said Magsayo, who is managed by Peter Sevastopoulos and trains with Freddie Roach out of the Wild Card Boxing Club in Los Angeles.

“It is great what they do for the Filipino boxers. I am very happy I am on the right path now. I will do my best and not waste this opportunity.”

Magsayo turned pro in 2013 with ALA Promotions before announcing a split in 2018. He sat out all of 2018, and then signed with Cameron Dunkin, fighting twice in 2019, including a fourth round KO of Erick Deztroyer in Singapore, and a unanimous decision over former WBO bantamweight titleholder Pungluang Sor Singyu.

Gibbons says Magsayo, who is rated no. 5 by the WBC and no. 11 by the WBA, will be back in the ring this May on a card in the U.S.

“We have been watching Mark for a few years now,” said Gibbons, in a press release, adding that Magsayo had “bounced around and his career was put on hold for various reasons.

“But he is home now with MP Promotions and we are thrilled for Mark and his wife Frances that they signed with us. We look forward to making Mark’s dreams of fighting in the U.S. again and becoming a world champion come true,” added Gibbons.