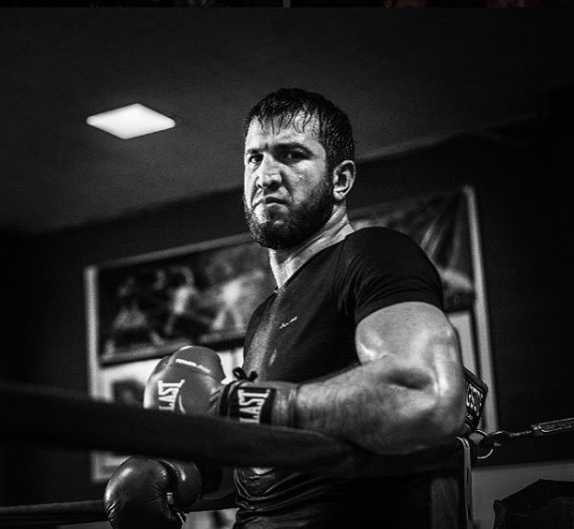 If Davtaev comes to my door requesting a donation to the charity of his choice, I'm ponying up. (Photo by My Art My Rules)
10
Mar
by Michael Woods

You saw on Saturday night how the heavyweight division is a bit different than the other weight classes in the sweet and savage science.

Actually, it’s different in a couple ways. One thing is, the game can change so quick, as we saw in round four of the Adam Kownacki versus Robert Helenius scrap, which was the main event at Barclays Center and on Fox.

The 6-3 Polish American, on a track to get a most meaningful and lucrative bout in late summer or so, saw his pathway diverted. Helenius’ power, at age 36, is still present, to the extent that the New York boxer got buzzed, fought back, but then got overwhelmed by the 6-6 1/2 Finnish-Swede.

No one should write off Kownacki, but many will, and the search will be on to bring another heavy hitter to the fore.

There will be a few nominees; one pugilist who’ll get an extra look is Apti Davtaev. 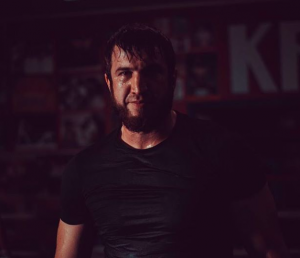 Davtaev looks the part, doesn’t he? He could do bill collecting if he decides to exit boxing. (Photo by My Art My Rules)

The 30 year old boxer hails from Russia. He’s promoted by Dmitriy Salita, who is building up the heavyweight section of his growing stable.

Salita two months ago aligned with Top Rank, and has his jumbo scrapper Jarrell Miller in a co-promotional situation with the Las Vegas corporation. We can see Miller getting a spot on the May 30th Madison Square Garden card, which will be topped by a Vasiliy Lomachenko-Teofimo Lopez lightweight collision.

Before that, we’ll see if Davtaev, now holding a 20-0-1 mark, could grab a hefty helping of buzz. He’s paired with Lucas Browne March 28, in Las Vegas. Showtime will be the TV platform, and Luis Nery and Rances Barthelemy will share the bill, as A siders, with Davtaev.

Wallin, also in the Salita stable, got hurt, so Davtaev subs in. I checked in with the Russian, to get a sense of how he’s assessing this looming opportunity.

“I am always ready to fight,” Davtaev said. “Year round, I am in shape, I stay in the gym and do not relax. For me this is a great opportunity to declare myself on the big stage in the heavyweight division and of course I was glad to accept this fight.”

If you haven’t seen him, Davtaev is a rugged righty. He’s not a fancy type, but he’s getting better on being loose, relaxed, so punches flow more. Sugarhill has him staying lighter on his feet, and that helps his rhythm. His hand speed deceives a bit, and he can counter you more than you think his size and look suggest he would. Squaring up less when he gets into range will help him as he edges up the ladder.

RING website readers may well have their eyes on Davtaev, having seen an October 2019 story.

He’s been busy; Davtaev got Ws on Jan. 10, and also Feb. 21. In round three, Keith Barr succumbed to the Davtaev power, in Atlantic City. Then, six weeks later, Davtaev trekked to Moscow, where he ended the evening in round two, versus Ghana’s Napari. The Russian gets it, he knows Barr is 35, and has been stopped out eight times in his 13 loss. Napari got to 20-0 fighting no namers in Africa.

“The fight with Keith Barr and John Napari the result was as expected for me,” Davtaev said. “I saw a lot of progress in my training and fulfilled my plan for the fights, which was set to me by the coaches.”

Browne isn’t at his peak, but he figures to have more in the tank than Barr and Napari did. “Lucas Browne is an excellent boxer, for a very long time I wanted to fight with a famous rival and show the whole world that I am in line for the heavyweight world title,” Davtaev continued, referring to the fact that the Aussie has met James Toney, Ruslan Chagaev and Dillian Whyte, solid names. “For me, the fight with Lucas is the most important in my career, but at the same time it is an ordinary boxing match.”

Sounds smart, seems like he’s not attaching excessive import to the assignment, then. “I’ll just go out and do my job.”

I checked in with Salita, trying to get a sense on how he rates Davtaev, versus the southpaw Wallin, whose stock rose when he hung tough versus Tyson Fury in their Sept. 14, 2019 clash. (Fury snagged a UD12 victory.)

“Apti and Otto are completely different fighters,” Salita said. “The fight versus Lucas Browne is a big test for Apti. He has been looking very good in the gym but the ultimate test of that is the ring and will see what Apti is all about on March 28th.

“If all goes well and he passes the test of Lucas Brown in a spectacular way like I think he can I see him fighting for a world title in a year. He has talent, power, size and skills. With the training regime that he had for the last two years under Sugarhill Steward (below, left, posing with the 250 pound pugilist), I believe he has all the tools to be a big force in the division. On March 28th he will have a big test and if he passes it the sky is the limit!” 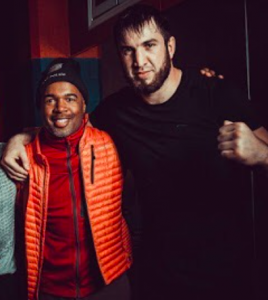 Browne has been stopped twice, in both his losses. A flashy ending, Davtaev by KO, could grab some of the attention that has flowed away from Kownacki.

Yeah, it may not be “fair,” but this is boxing.

All is fair in love, war….and boxing.