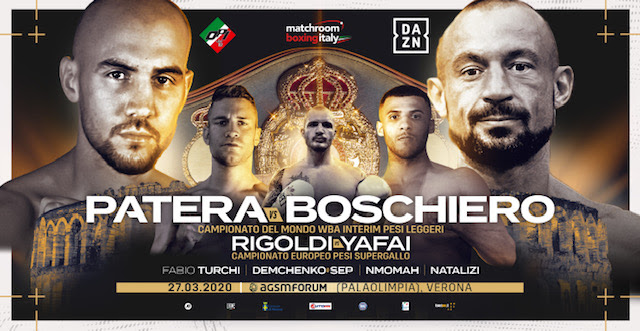 Italy’s decision to quarantine the entire country due to the new coronavirus has impacted at least one boxing event.

The Francesco Patera vs. Devis Boschiero fight scheduled for March 27 at the AGSM Forum in Verona, Italy has been postponed, Matchroom Boxing Italy announced Monday. The fight would have decided the vacant “interim” WBA lightweight belt. Patera (23-3, 8 knockouts) of Genk, Belgium was looking to extend his winning streak to six fights, while the local favorite Boschiero (48-6-2, 22 KOs) sought the biggest win of his 16-year career.

That card, which was co-promoted by Opi Since 82, was also supposed to feature former British amateur standout Gamal Yafai (17-1, 10 KOs) against Luca Rigoldi (22-1-2, 8 KOs) for the European junior featherweight title.

“The show…will be rescheduled as soon as health regulations allow,” said the press release, which adds that another card that was supposed to take place in Milan on February 28 is also seeking a new date.

“Given the unprecedented nature of this now global issue, we are unable to offer more clarity on new dates.”

Italy has been particularly hard hit by the COVID-19 outbreak, with over 400 deaths from 9,000 reported cases during what Prime Minister Giuseppe Conte is calling the country’s ”darkest hour.” The entire country is now under quarantine through April 3, the prime minister announced Monday, with schools closed and all sports events, including Italy’s popular Series A soccer league, canceled. Under the quarantine, travel is only allowable for work and family emergencies.

Yafai tweeted out his reaction to the news on March 5, saying “Unfortunately after 12 weeks of hard training my European title fight at the end of the month has been cancelled due to the coronavirus in Italy, hopefully I’ll more news soon on a fight date.”

Unfortunately after 12 weeks of hard training my European title fight at the end of the month has been cancelled due to the coronavirus in Italy, hopefully I’ll more news soon on a fight date. Thankyou ?? @MatchroomBoxing @EddieHearn

Other boxing events which have been rescheduled due to COVID-19 include the Asia-Oceania Olympic boxing qualifiers and the Jose Ramirez-Viktor Postol fight, both of which were originally scheduled to take place in China, where the outbreak initiated.