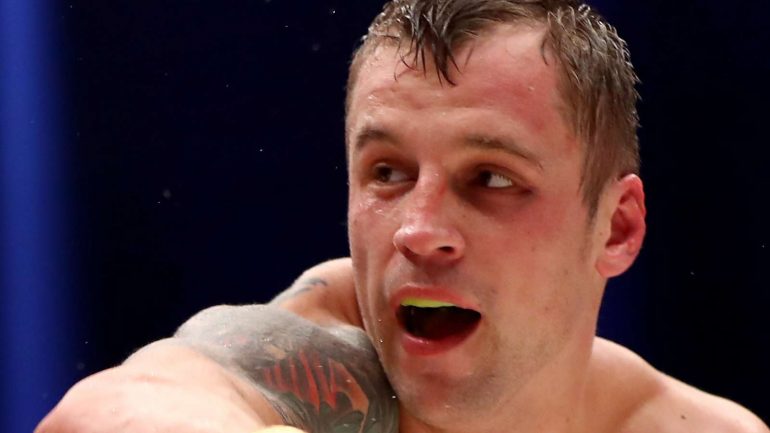 The “KO Doctor” is telling Briedis to “prepare yourself for war.”

The world is about to find out whether Mairis Briedis’ home remedy will be the solution to avoid a painful prognosis from the “KO Doctor,” Yuniel Dorticos.

Briedis hosts Dorticos in the cruiserweight World Boxing Super Series final March 21 at the Arena Riga in his hometown of Riga, Latvia, and live on DAZN. Dorticos’ IBF cruiserweight strap and the tournament’s Muhammad Ali Trophy will be on the line.

“I’m really looking forward to the final,” Briedis, the WBSS No. 1 cruiserweight seed, said in a news release. “It is fantastic for Latvia to be able to host an event of such magnitude. Millions and millions of eyes worldwide will be watching what’s happening at the Arena Riga on fight night.

“It is going to be a thrilling fight as I’m facing one of the very best cruiserweights on the planet,” he added. “The stake is so high and both of us are only looking for one thing — to win it all!”

While equally excited, Dorticos took liberty to issue the following caveat to Briedis.

“Briedis, you better prepare yourself for war,” the Cuban fighter and tournament’s second seed said.

“Let’s give all the fans around the world a spectacular all-time classic. Come fight night, you will know why I’m called the ‘KO Doctor.’ The Muhammad Ali Trophy has my name engraved already!”

Both Briedis (26-1, 19 KOs) and Dorticos (24-1, 22 KOs) produced knockouts their last time out in the WBSS semifinals, with “The Latvian Punisher” delivering a third-round TKO of Krzysztof Głowacki and the “KO Doctor” eviscerating Andrew Tabiti with a 10th-round knockout June 15.

In just over two months, boxing fans will find out whether the final produces even more fireworks.

“The conclusion of Season 2 of the WBSS is going to be nothing but spectacular,” said Kalle Sauerland, the chief boxing officer of the WBSS. “After two epic Ali Trophy finals — Regis Prograis vs. Josh Taylor and Naoya Inoue vs Nonito Donaire — it’s time to crown the cruiserweight champion of the WBSS.

“As we have become accustomed, whoever raises the Muhammad Ali Trophy at the end will become the man to beat in the division. And as with the other finals, we are very proud to also have the historical Ring Magazine belt on the line in red hot Riga.”