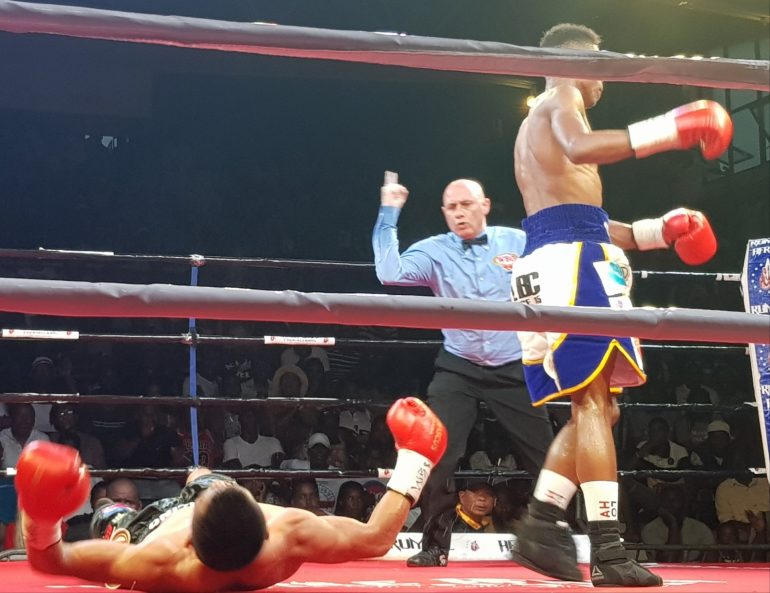 Sigqibo, a junior bantamweight, recently changed his nickname to “Show Stopper,” which was a bold move for the junior bantamweight prospect who scored a mere three stoppages in 15 bouts. He changed all that when he knocked out his more experienced Filipino opponent, Cris Paulino, stone cold with a right hand at the 59-second mark of the seventh round.

Sigqibo, a silky smooth boxer, started out in familiar fashion, controlling the action behind his jab. Paulino, who has shared the ring with the likes of Jason Moloney and Vic Darchinyan, was content to move around the ring, attacking with a lead left from his southpaw stance whenever Sigqibo seemed like going in for the kill.

Sigqibo had his opponent’s attacks well timed and when Paulino opened up, he mostly punched air. He tried roughing up Sigqibo on the inside, drawing a warning and later a point deduction from referee, Deon Dwarte, for rabbit punches, but the South African continued to display impeccable calm under fire, landing straight rights and left hooks whenever he found the gap.

Just when it seemed like he was on his way to another decision win, he dropped Paulino on the seat of his pants in the sixth round with a perfectly timed straight right. He got up and fought on, the knockdown appearing more the result of Sigqibo’s timing, since Paulino was clear eyed with his legs under him.

Then the seventh round happened: Sigqibo banged in a straight right on the button and Paulino went down like a sack of potatoes, flat on his back. There was no getting up from this one and he was counted out.

Junior flyweight Nontshinga, who is touted as South Africa’s next big little man. He has been moved along fast, kept his 100% KO streak alive with a fifth round knockout of the more experienced Ivan Soriano of the Philippines.

The end came courtesy of a massive straight right at the 1:50 mark, but that didn’t tell the whole story of the fight.

Soriano was a cagey customer with some mustard on his shots. He started on the backfoot, jabbing and feinting from a low left guard, trying to draw Nontshinga into his counter shots. The South African had the faster hands and possibly shaded the opening round, being the aggressor but fighting behind a tighter than usual guard.

There was a reason for that, because Soriano found his way through Nontshinga’s gloves with a ripping right uppercut every time the South African looked like building offensive momentum. One of them had Nontshinga holding on in the second and Soriano added a sweeping left hook to his arsenal that found the mark as well.

By the third, Nontshinga had a rapidly swelling left eye to contend with and whenever he landed some hard body shots and short rights, Soriano would nail him with more uppercuts that had him bothered.

There were nervous moments among the partisan crowd but Nontshinga adjusted in the fourth, started to time at least some of the unorthodox punches of his opponent and then dropped him heavily with a straight right at the end of the round, the bell thwarting his follow up assault.

With his home crowd egging him on, Nontshinga removed the dangerous Soriano from the equation in the fifth, dropping him in the corner with an all out attack, punctuated with another straight right, this time for keeps.

Sivenathi Nontshinga moves to 9-0, all by knockout, while Ivan Soriano suffered his first defeat inside the distance and dropped to 20-4-1 (10 KOs).

Nontshinga, nicknamed “The Special One,” showed speed, power and heart but also some vulnerabilities and it is clear that he is still a work in progress.

It was a step up fight for the defending national champion. Sityatha was on a eight fight wining streak with victories over the likes of Edrin Dapudong and Gideon Buthelezi and had the better quality of opposition on his ledger.

For the first four rounds it looked as though Lwandile Sityatha’s experience would serve him well, as he forced the fight on the inside against the tall and rangy Malindi, banging away to the body. Sityatha controlled the distance well and outfought Malindi who curiously threw his height and reach advantages out of the window to try and brawl with Sityatha, a strategy that was ineffective, since most of his punches missed widely while he was getting pounded to the body.

Malindi, to his credit, seemed to realize that and gradually started to claw his way back into the fight from the fifth round, getting his jab going and dropping in his right behind it. He had a big seventh round forcing Sityatha backwards and returning the body shots in between varying his jab by doubling it and throwing it to the body every so often.

From then on, Sityatha started to deflate like a balloon and Malindi was firmly in control down the stretch, overturning his early points deficit. A sharp right sent the spray flying from Sityatha’s head in the twelfth as Malindi mugged to the crowd.

It remains to be seen how far Ronald Malindi will go, but a bantamweight sporting a height and reach advantage in the Zolani Tete range, remains a nightmare for any one.

Featherweight contender, Lerato Dlamini, fresh from an upset signature win over then unbeaten prospect, Dave Penalosa, in Jeddha last year, had to contend with late substitute, Jeremiah Mhere, from Zimbabwe after his original opponent pulled out on the week of the fight.

Mhere was game but overmatched and Dlamini dispatched him courtesy of a double left hook to the body at 1:16 of the fifth round.

Dlamini, who also boasts a win over former WBA featherweight champion and Chris John conqueror, Simphiwe Vetyeka, moves to 14-1 and hopes to get a world title shot in 2020.

This tournament was presented by Teris Ntutu and Nomfesane Nyathela of Rumble Africa Promotions and was also South Africa’s first Pay per View, which was live streamed by Mbuyekezo Boxing Channel.