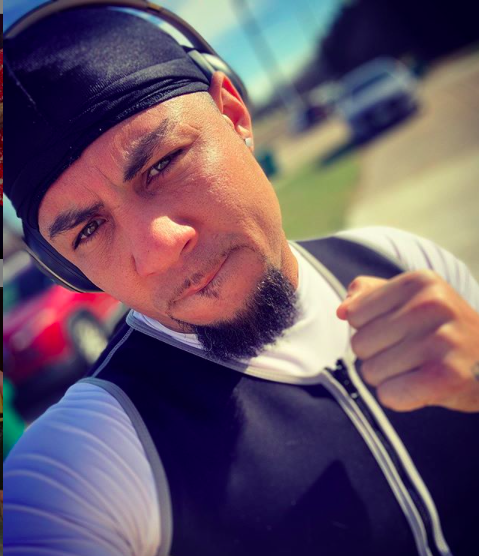 The Texan Clarkson found boxing, and found God, after finding himself getting too much attention from law enforcement. He's proud of his turn-around..and should be! He fights on PPV tonight, in Texas.
07
Mar
by Michael Woods

Fort Worth born-and-bred boxer Samuel Clarkson Jr. apologized for not getting back to me yesyerday (Friday), bless him, and I answered immediately:

Weigh in day is nutso, and he can’t be blamed one stitch for having too many things to juggle, while making sure he’s on weight for his main event scrap this evening (Saturday) vs. Israel Duffus in Irving, Texas, at the Toyota Music Factory, and on PPV. 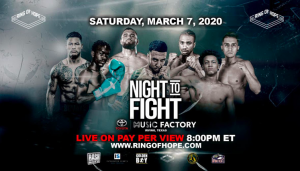 Yeah, there’s plenty of boxing out there to watch, to take in, but this event shouldn’t go under radar. Clarkson is a boxing success story, the kid was too familiar to law enforcement as a teen, and boxing was the driver to turn his life around.

The event will raise funds for the non-profit organization Ring Of Hope, created in 2010 to help kids like Clarkson Jr. in the greater Dallas area escape trouble.

“It’s truly a huge blessing to headline Ring of Hope’s event,” said Clarkson Jr. “It’s great to see how Ring of Hope opens its doors to everyone and people of all different backgrounds. I want to become a part of a movement to show kids who may have troubled backgrounds that boxing accepts you no matter who you are.”

The 29-year-old southpaw racked up an amateur record of 89-9 and won the National Pals in 2009 and the Ringside silver medal in 2010, and is also a two-time Texas Golden Gloves champion.

“I was a firecracker always up for a fight,” said Clarkson Jr. “I turned a negative into a positive. When I got introduced to boxing, it was mine, and I have stayed out of trouble for the last 13 years. Boxing has changed my life. For kids who are like me when I was growing up, if you have the right passion, there are no limitations to who you can become.”

He shared a bit more about how he’s settled into adult-hood. “I’ve returned to my comfort zone with spirituality. I’ve been reading the Bible a lot more and believe that God will set-up everything for me as a family man and a provider. I’ve fallen short a lot in the past, but ever since I’ve refocused my career, everything is falling back into place. I’m excited, and I can’t wait to put on a great show. Everyone will be pleased to see my skills. I’ll be coming to make a statement. I’m coming with a chip on my shoulder and I’m looking to dominate.”

Duffus is a 27-year-old who’s been training with the Hall of Fame Coach Roach at the Wild Card Gym in Los Angeles ever since he moved to the United States in 2014.

“The last few years have been rough for me. I split with my wife, and we have two very young children. The last thing on my mind in the middle of the storm was boxing,” said Duffus. “My personal issues were affecting me, but I’m doing better now, and I’m focused on putting my career back on track.”

Yeah, for many, many folks, it’s counter-intuitive, but that ring is where they feel most in control, and safest, and strongest….

Night To Fight will be available live on Integrated Sports Pay Per View on cable, satellite and digital pay-per-view via iN Demand, Vubiquity, DIRECTV and DISH in the United States, Shaw PPV in Canada and worldwide via the FITE.TV app and website. Showtime TV broadcaster Al Bernstein, former two-division world champion Paulie Malignaggi and LA Times writer Manouk Akopyan will call the action from ringside.

On Saturday round lunch-time, I got a quick update from Clarkson: “I’ve trained really hard, our first opponent fell out and they replaced him with Israel. And we trained even harder for him so we can make a statement! I’m back at light heavyweight (after creeping to cruiser in 2017) and I’m coming for all the titles and it starts today. My prediction is fourth round knockout!”

So, seems like he’s pumped to be able to strut his stuff around his home base, yes?

“My nickname is ‘Main Event,’ and ‘Main Event’ fighting in the main event feels real special! I live in Cedar Hill, about 25 miles south of Irving,” he told me.

The undercard gets extra zest with the presence of Evan “Yung Holy” Holyfield (3-0, 3 KOs), who made his professional debut on November 2, 2019 and will fight his fourth fight tonight. 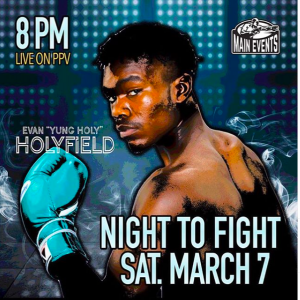 His papa is Evander, and the living legend weighed in with thoughts on his kid’s prospects. “Evan is doing good but it’s kind of hard to tell when you first start off because you are trying to figure out what type of fighters he is fighting compared to who that champion is in that weight division, to know where he has to get. Right now I think just getting him comfortable when he’s in there and showing that it’s not that much different than being in the gym. Evan is kind of skillful and I think you get tested when you get good sparring partners – somebody who has done something, somebody that used to be a champion.”

The kid came on the Everlast “Talkbox” podcast fight week, and showed some of his personality. “I’ve seen my opponent fight and I know he is going to come to fight,” Evan said in a press release, supplied by promoter Main Events. “I am just going to go out there and hit and don’t get hit and let my punches do the talking. Regarding my dad and my last name . . . I don’t feel any pressure. When I get in the ring I fight for myself. I am in the ring for me. I don’t care if no one showed up to watch. I don’t care if I had my mom’s last name, I would still go in there to give it my all. I feel like I have the talent that got me this far and it is just a matter of staying focused, staying in love with the sport.”

Is the kid a chip off the ole dad block? Gotta watch and see how it plays out!

And is it hard having people do the compare and contrast all the time?

“My dad and I were the same size all through our lives and now we are both 6’2” but I am still eating my Wheaties to try to get that extra inch,” Evan said.

Check Evan out on the podcast, he’s pretty funny talking about his brother Elijah, age 22, who is a running back for the Philadelphia Eagles (NFL). Evan, who grew up in Georgia, also tells us the hardest part of writing his first book. We asked him, did he take to boxing because of his dad’s fame, or despite it?