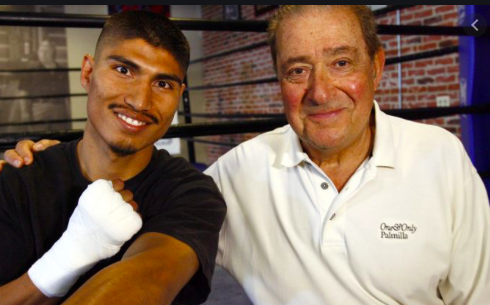 Around 2012, Mikey was seen as a future Top Rank building block, what Crawford is now.
06
Mar
by Michael Woods

The welterweight division, I swear, will soon, any time now, shake out, and gigs will get booked for the top level hitters at 147.

Terence Crawford may very well be the best in that realm, so I asked his promoter, Bob Arum, for an update on what will be next for “Bud.” The Nebraskan is 32 years old; he last gloved up on Dec. 14, 2019, when he rumbled with Egidijius Kavaliaskaus at Madison Square Garden, and snagged a TKO9 victory.

Now, it’s March, and no surprise, Bud wants to finalize a scrap, do what he does best, fight.

Arum told me he’s still in see what’s what mode. He’s wanted to match Bud against Manny Pacquiao, who at 41 is on a perceived upswing, because he looked like a man ten years younger when he bettered Keith Thurman in his last tussle, July 20th, 2019.

I asked about Manny’s status, we’ve heard that it’s looking like Pacman will clash with Mikey Garcia this summer, perhaps in Saudi Arabia. But he thinks that locale is a no-fly zone, sounds like, because they are seeing more coronavirus cases. Saudi Arabia introduced a series of measures to protect the two holy mosques of Mecca and Medina from the vicious virus. Arum presumably has a good handle what the Saudi handling of travel and tourism could look like in the near future, as he’s been discussing where to place a Tyson Fury (Top Rank) vs. Anthony Joshua (Matchroom) clash, with Saudi Arabia in the lead.

So, Garcia’s status for next is in flux, perhaps,  and the virus is, indeed, causing shifts in strategy and planning all over the place.

We spoke on the healthy (too “healthy?”) asks coming from some boxers these days. Garcia supposedly made $7 million or so for meeting Jessie Vargas on DAZN on Feb. 28. Great for Mikey, but is it great beyond that?

I chatted on this subject with Ak, on the Ak and Barak show at SiriusXM Thursday afternoon.

(People mostly say how great it is that fighters get paid so well in the pugilism sphere, especially as compared to in UFC. True enough…

It can be that when Garcia gets this sort of lump sum, that affects the take-home pay for others within that eco-system. And as I said to Ak, while cracking that yes, I’m talking like a Bernie-backer, that “income inequality” construct is undeniably unhealthy if you see a bigger picture, economically.

When only massive needle movers get the jumbo bags, and those bottom 95% are forced to fight for crumbs, relatively speaking, that spurs excessive anxiety which saps energy, unnecessarily, from the vast majority of citizens. But, this is a continuing point of discussion–that between 49-80% adults are living paycheck to paycheck, depending on what study you cite– ignored by most, and interpreted differently, depending on your POV, politically.

Work harder…be smarter, save, don’t buy too many lattes, many “conservative” types will opine. My point being: Boxing issues are often not simply contained within that zone of industry. How salaries, purses and paychecks get distributed, based on “value” and “worth” of the individual worker, is right now and will continue to be one of THE issues of our time.)

Back to the boxing arena–Arum told me he doesn’t have a problem, generally, with boxers looking to get into the vaults, of the Blavatnicks, Haymons, etc.

Bottom line, the virus spread, seen in 96 countries, with more to come, is affecting many if not most things, and yes, that includes our theater of the unexpected sphere. “It’s not about greed of any fighters, what’s there now that wasn’t there before is an act of God, or whatever,” the Hall of Fame fight-maker said.

Seems like Arum isn’t of a mind that it’s time to get spending on purses under control, try to convince the fighters that some of their asks are out of hand.

Now, on March 3, Arum chatted with Marcos Villegas, and was of a different mind regarding Garcia and purse asks, and the like.

“As far as I’m concerned, Mikey Garcia should just forget about it, because the money that Mikey Garcia wants is obscene and he’s not worth it,” Arum said to Villegas. “He can’t draw anything and let him stay with Eddie Hearn who will squander a lot of money on him. I’m not interested in promoting a fight for Mikey Garcia — not that he isn’t a good fighter, not that he isn’t a nice fella, he is a nice fella. But his financial demands are ludicrous. Money is money, I know what a fight can bring in. I’m not in a position, nor want to be in a position as Eddie Hearn was with DAZN, squandering other people’s money, accomplishing nothing. That’s not my business.” Bob then stood up, and jetted.

But he’d chilled since then, with me, and when processing the same topic with Ryan O’Hara, in a story that posted to RING website Thursday evening.

O’Hara asked Arum about maybe making a Terence Crawford v Mikey Garcia fight. (Mind you, not everyone knows this, as it went off the rails a few years ago, but Mikey was a Top Rank young building block, but then decided he wanted to break ties with them, and in fact escalated the matter to the point that lawyers got involved. 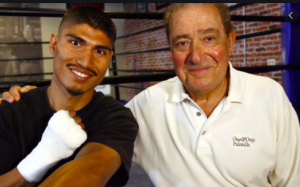 Around 2012, Mikey was seen as a future Top Rank building block, what Crawford is now.

Garcia got his wish, he slid out from the Top Rank tent, and has been positioning himself as a promotional free agent, and taking gigs on a fight by fight basis for the last couple years. Yes, it would surprise me if Top Rank and Mikey re-entered into a relationship…but Arum is much more of a pragmatist than he is a grudge-holder, so I’d not bet the house or even the out-house on either outcome.)

“(Garcia) has to call me,” Arum said to O’Hara, indicating sure, he’d work toward a Bud vs Mikey tango. “The fact that Mikey thinks we have some differences with him is crazy. We had a dispute a couple years ago, but in boxing, you don’t hold grudges,” he added. “We’re happy to talk to Mikey about fighting Terence Crawford. Let him talk to us, and let’s see if his financial demands are unreasonable or not. It’s unfair for me to say that they are without even talking to him.”

I asked Arum, when I spoke to him, Thursday night, after O’Hara had, when he expects to get something signed and sealed and delivered for Crawford, for Bud’s next bout. The 32 year old last tangoed in December. He’ll want to get a first half of the year fight set soon.

Bud fought three times in 2016, two times in 2017, two times in 2018 and twice in 2019. Seems like he’s settled on two tussles a year, so it’s not like he needs to know TODAY if he will scrap with Kell Brook, or Errol Spence, or Manny Pacquiao or whoever. Bob suggested I do this: “Talk to Bomac,” aka Brian Mcintyre, the trainer/manager for Bud.

So I did. On Friday around lunch time, I touched base with Bomac. Yes, the tutor said, him and Bob have discussed a Bud vs Mikey fight.

Bomac said to Bob, ‘Hey, Mikey said after beating Jessie Vargas that he’s open to fighting Bud. How about that?’ Bob listened. But Bomac hasn’t been told that Top Rank and Team Mikey have connected and discussed any potential terms for that match.

Being that Mikey managed to raid Eddie Hearns’ wallet and crypto stash, securing a reported $7 million purse for battling Vargas, one could imagine how much of a bump he’d desire for fighting someone a full notch better, on paper.

OK then, assuming y’all want to set two fights for 2020, when ideally does Team Bud need to know who the 36-0 hitter fights in the first half of the year?

“We wanna know at least in the next couple of weeks,” Bomac said. So, know deets before end of March, and it sounds like the aim is to see Crawford fight a couple weeks after Jamel Herring fights. Seems like that will be June 13, and the arrangement will pit WBO super feather champ Herring, the Fighting Marine,  against challenger Carl Frampton, the fighting pride of Nothern Ireland, in Ireland. Makes sense this is how Bomac slots the information in his brain, he trains the 34 year old Herring and “Bud.”

“I hope the virus doesn’t KO plans, but June 13th is the date,” Herring told me on Friday afternoon. “Just waiting on the contracts to be finalized.”

Back to bossman Arum; he made clear, though, that this right now is different, because coronavirus is a game changer. “We’re going through times that we’ve never dealt with, never had a disease affecting my boxing program.”

And check it out, I don’t think most all of us have really wrapped our brains around it. Plans being made right now, for the near future, in places that we’d get to by plane, well, it might be wisest to not use the indelible marker. You might wanna pencil plans in, because a pandemic surely could take up a whole chapter in the boxing book called “Theater of the Unexpected.”