Helenius is 35, but says he edges Kownacki in technique, speed and strength 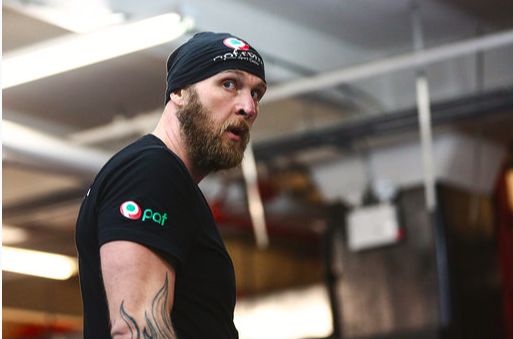 “I’ve been doing boxing for twenty years. I’ve had a lot of operations, a lot of bones broken in my hands. But, I have to say now, I feel confident. I haven’t felt this confident in years. I feel good…I have long career, I have tough fights. Lamon Brewster, Samuel Peter, Serhei Liakhovich. I have a lot of hard fights behind me, and I think that’s gonna make me more confident… He can’t bully me, like he has done with several of his opponents.” —Robert Helenius, 3-4-20, at Gleason’s Gym, Brooklyn, NY

Adam Kownacki set the bar high, from the standpoint of engaging in a “fan friendly” matchup, as him and Chris Arreola didn’t pause all that often for deep breathes at Barclays Center last September.

I’m thinking that consumers on site Saturday night at Barclays Center, for Kownacki’s second headliner gig in Brooklyn are well positioned to not experience a let-down, as they take in the Polish Power’s collision with a 6-6 1/2 Finnish Swede Robert Helenius.

Kownacki has promised he’s going to be a notch better, because, he now admits, he was a bit too cocky that Arreola was faded.

AK hasn’t made the same mistake in the leadup to this one, he told me Wednesday during a workout for media at the famed and fabled Gleason’s Gym in DUMBO, Brooklyn.

He knows Helenius (29-3 with 18 Kos; two losses by stoppage) is 35, that he was stopped in July 2019 by Gerald Washington, who the NY-based PBC boxer finished off when they tangoed in January 2019.

The 30 year-old Kownacki (20-0 with 15 KOs) wouldn’t tell you that a stoppage win over 9-4 Mateus Roberto Osorio in his last go, in November 2019, signifies that Helenius is the same dude who beat Sam Peter, Siarhei Liakhovich and Dereck Chisora, in 2011. But he’s taking Helenius at his word, the statements he made at Gleasons, when he told media that nagging injuries have died down, and he’s feeling empowered.

For Helenius, he believes that Kownacki is flawed defensively. To the point that he could stop the Pole? “Probably. That’s what we’ve been training for.” 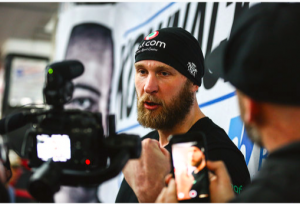 Kownacki says he assumed Arreola was more faded than he was..so he isn’t thinking Helenius is washed. (Trapp photo)

No, he wasn’t acting cocky. He saw the bout versus Arreola, that impressed him, and he thinks that gave AK more confidence.

Helenius several times came back to the fact that he’s been a campaigner for a long spell. He came off as a proud veteran, who believes in his stiff jab, and stern right hand. He sees AK as being a volume guy, not a sniper.

Nah, he’s not worried that the joint will be filled with AK rooters, to the point that will give him butterflies. Again, he said, he’s a vet, he’s been there, done that, fought in front of his peeps, and people who booed him from the anthems on. “I’ve been so long with this boxing,” is how he put it.

He’s a vet, but still learning lessons. Like with Washington; he admits he didn’t take him as seriously as he should have. “I overlooked the opponent,” and yes, he understands why some fans didn’t embrace Kownacki vs Helenius, being that Washington lost to AK, but beat him.

Understandably, he didn’t take the bait when someone asked him if a win over the Polish-American would launch him to a fight with an Anthony Joshua, or an Andy Ruiz. Not gonna ponder that, he said, let’s cross that bridge when we get there.

No, Helenius doesn’t see this as a 50-50 fight, on paper. How does he see it? 80-20 in his favor, he told me in DUMBO. Technique, speed, strength, he thinks he has those advantages coming in to the bout.

My three cents: Bless his optimism, Helenius should be seeing the contest as playing out his way. Hey, maybe he is physically feeling like the clock has been turned back in his favor. But Kownacki I think wants to sling-shot himself into a fall fight with momentum, and that could well come at the expense of Helenius. Yes, he’s a vet, and his experience could indeed come to the fore…but I look at those two KOs in three losses, and think AK has a real good chance to land an overhand right which leads to his 16th KO win. But…AK is right to respect Helenius’ experience and yes, assume he still has some pop left. See how it plays out for yourself, the bouts kick off at 8 PM on FOX over the air.