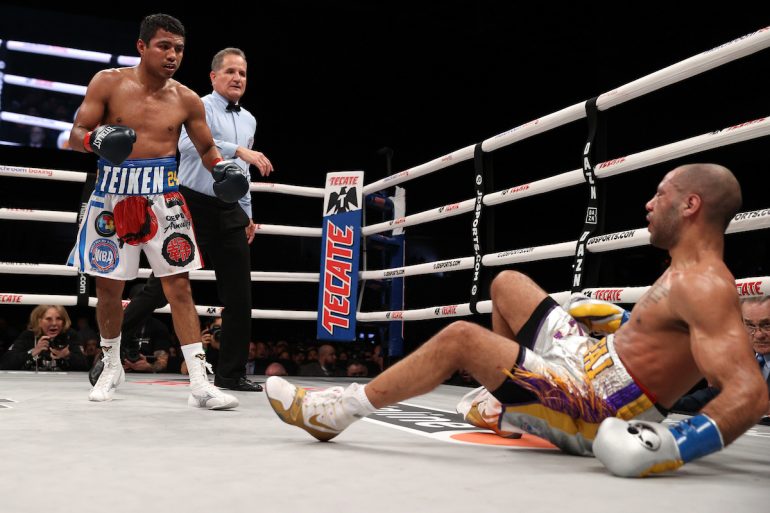 Mikey Garcia returned to the ring (after close to a year out of it) and to the welterweight division last Saturday (February 29), dropping and outpointing Jessie Vargas over 12 rounds (116-111, 116-111, 114-113) in Frisco, Texas. It was the main event of a loaded Matchroom USA card streamed live on DAZN, but it may as well have been the “walk-out” bout for the co-featured fight of the evening, WBA 115-pound beltholder Kal Yafai’s sixth title defense against little legend Roman “Chocolatito” Gonzalez, who was only two bouts (vs. modest opposition) removed from a crushing (seemingly career-ending) KO loss to Srisaket Sor Rungvisai in 2017.

Gonzalez (49-2, 41 KOs) overcame the doubts, his inactivity, the wear and tear of a hall-of-fame career (contested over four weight classes), and the bigger, fresher unbeaten titleholder in front him to deliver a vintage pressure-fighting, combination-punching, inside-craft-and-angles masterpiece, brilliantly dismantling Yafai (26-1, 15 KOs) en route to an immensly satisfying ninth-round KO.

Mikey’s welterweight rerun paled in comparison to the Return of the King, and the boxing world rightfully gave Gonzalez (who many had written off, and some pitiful fools shamefully derided as an “HBO creation”) an extended standing ovation.

The Ring Ratings Panel was almost in full agreement with advancing Gonzalez from No. 6 to No. 2 in the junior bantamweight rankings, behind only No. 1-rated nemesis Sor Rungvisai and the Ring/WBC champion Juan Francisco Estrada (who Gonzalez defeated in a classic 12-round battle back in 2012 at 108 pounds). 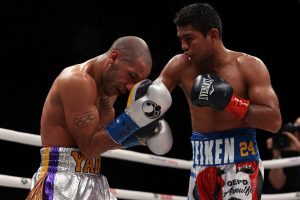 “Roman Gonzalez ripped the WBA title from Kal Yafai in nine highly impressive rounds,” said panelist Anson Wainwright. “I’m British and have nothing against Yafai but couldn’t be happier that Chocolatito is king again. Wonderful performance. Gonzalez to No. 2 and Yafai to drop to No. 6.”

“Still trying to figure out if Roman Gonzalez is fully back or if Kal Yafai’s strategy was as dumb as it looked? My vote goes to Roman at No. 4 while Yafai drops to No. 8,” said Mulcahey. “While the result and finish was fantastic, I think Roman did not have his usual zip and for now I think it was more Yafai failing than Roman excelling. Could be wrong, won’t argue too much in other direction, but do think some are reading more into this result than actual energy Roman brought. He had accuracy and brains for sure, still, I did not see that extra sauce he will need against elite.”

We’ll see how Gonzalez fares against the elite soon. Eddie Hearn, the head of Matchroom Boxing, said he would try to make the long-anticipated rematch with Estrada (who he co-promotes). Hearn also co-promotes Sor Rungvisai. There are also rumors of a late-year showdown with WBO beltholder (and fellow four-division titleholder) Kazuto Ioka in Japan.

Until then… ALL HAIL THE KING!

The panel was split on what to do with Garcia (40-1, 30 KOs), who exhibited impressive power and his usual excellent timing vs. Vargas, but also had to overcome a slow start and being outworked down the stretch. His last bout, a one-sided decision loss to Errol Spence Jr., let us know that he’s better suited at 135 or 140 pounds, but the money is at welterweight and with a possible showdown vs. Manny Pacquiao, so Garcia is definitely staying at 147. But he should be ranked?

“Why bring Mikey into the rankings at 147? He is 1-1 at the weight and his lone win was against an unranked fighter.”

Mulcahey agreed with Abramowitz and was against Garcia entering the rankings. 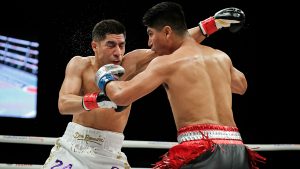 “I thought there was good chance Garcia and Vargas fought to draw (Vargas fights to his foes’ level and his size advantage) and was pleasantly surprised that Garcia was able to hang even into later rounds when I thought his strength would weaken.

“I can’t underestimate that fantastic boxing brain, though, and his class shone through. Is that win enough to get Garcia ranked? Nope, not for me, especially given Vargas has no elite wins at welterweight. Garcia’s previous win over Lipinets is an argument, it but happened at a lower weight two years ago and think I argued against Lipinets entering the top 10 at 147.”

“Although Mikey is 1-1 at 147, Vargas was ranked and only came out because he said he was fighting at 154. Mikey is a top-notch fighter and showed last night that he is a top-10 welterweight. Kavaliuskus is coming off a loss, showed spirit in it, but was ultimately stopped by Crawford.”

“I like Mikey at No. 10. It’s a close but clear win in my eyes, and I like the power he showed at the weight,” said Gray.

“I’ve gone back and forth about it and decided that I’m good with Mikey at No. 10,” said Montero. “We all know he’s gonna fight Pacquiao next and it’ll be at 147 so we can slide him in there and bump Mean Machine out.”

Morilla had the last word on Mikey.

“In a head-to-head matchup against Mean Machine, our current No. 10 (aside from the fact that his only loss was to our No. 1), I’d say Mikey stands just a little bit higher. So, yes to Mikey coming in at 10 for me.”

Welterweight – Garcia enters rankings at No. 10.

Junior bantamweight – Gonzalez advances to No. 2. Yafai drops to No. 6.

Flyweight – Julio Cesar Martinez remains at No. 3 after defending his WBC title via unanimous decision against spirited challenger Jay Harris. 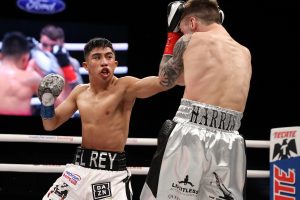 “Martinez just hit too hard and was too strong but full credit to Harris, who showed he deserved that shot and I think is our next guy in when (Kosei) Tanaka and (Charlie) Edwards officially fight at 115,” said Wainwright.

Added Mulcahey: “Julio Cesar Martinez showed his skills and strength again, but big props to Jay Harris who showed he’s on verge of a top-10 spot despite this setback. No big loser in this fight. (No. 2-rated Moruti) Mthalane starting to slip in this argument given Martinez’s activity, but for now retains the spot above Mexican given his length of resume and time at top.”