Arnold Gonzalez took a leap of faith, and got a ring education with Manny Pacquiao 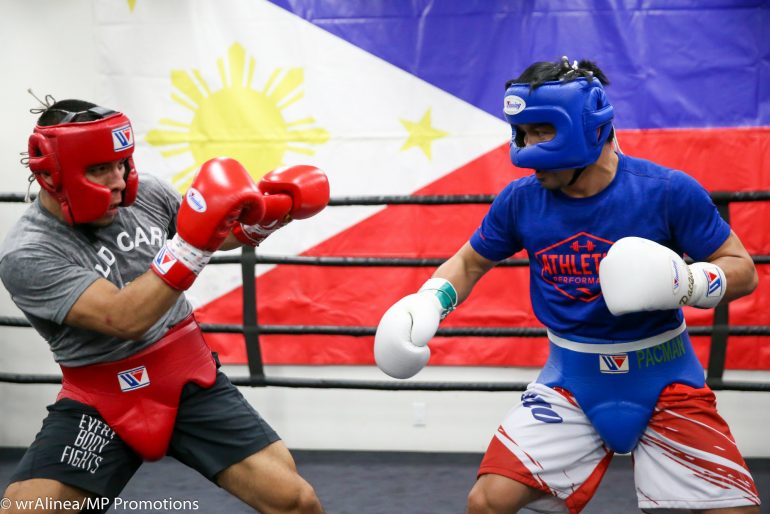 Many of the biggest decisions in the life of Arnold Gonzalez have come as leaps of faith. Like how, after a year of studying criminal justice at John Jay University, he decided to stop his studies to focus full time on his boxing. Or, how, at the advice of George Foreman III, owner of the EverybodyFights Gym he trained at in Manhattan, he headed out to Los Angeles to train at the Wild Card Boxing Club.

“I just always knew it was gonna pay off and it’s starting to pay off. I didn’t want a Plan B, I just wanted a Plan A,” said Gonzalez (3-0), a 25-year-old welterweight prospect born in Harlm to Ecuadorian parents.

Gonzalez will try to move his record to 4-0 this Saturday, when he faces Traye Labby (4-4-4, 3 KOs) in his first six-round assignment on the Adam Kownacki-Robert Helenius card at the Barclays Center in Brooklyn, N.Y. Labby is the third different opponent for this date, but Gonzalez is happy this fight isn’t expected to be a late swing bout like his last one.

Gonzalez had what he describes as an “on and off” amateur career, which culminated in a semifinals finish at the 2018 Eastern qualifiers, a qualifier for the U.S. Olympic trials, in Chattanooga, Tenn. Some of his biggest lessons came, not in fights, but after he took that chance to travel to the Wild Card.

Gonzalez said he didn’t know anyone in Los Angeles when he first arrived in 2018, and sought to build his reputation by impressing Freddie Roach in sparring, taking on anyone the legendary coach put him in the ring with.

He was scheduled to leave the following day, a Sunday, when Roach told him to extend his trip a bit. Pacquiao, who had trained only with Buboy Fernandez for his previous fight against Lucas Matthysse, would be returning to the Wild Card to prepare for the Adrien Broner fight in January and needed sparring.

He returned to New York for two days, said his good byes to his family ahead of a long camp, and then stayed in LA through Thanksgiving, Christmas and New Year.

Gonzalez still remembers what went through his mind before the first time he stepped in the ring with Pacquiao.

“Me being young, I was like ‘I’m gonna smoke that kid,’ and then as soon as he walked in the room my heart dropped and I was nervous. I was like, ‘F–k, now I have to spar Pacquiao,’” said Gonzalez. 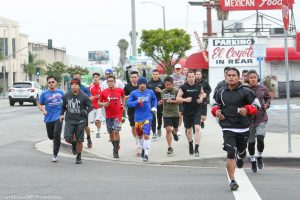 He went four rounds with Pacquiao and recalls being overawed by the awkward angles for which there was no way to prepare. He says that Pacquiao is more heavy-handed than he expected, and that it could be felt every time he touched anywhere on his body.

“His footwork is unreal. You’ll land a jab, jab cross on him and then he’ll take the cross and be off balance and then he’ll land with a random right hook that you can’t even teach that,” said Gonzalez. “The way he keeps himself on balance, always hopping on his toes and the weight of his hands, more than anything.”

In time, he earned Pacquiao’s respect, often being seated next to him at meals. Those early morning runs, when Gonzalez would be the only one who could keep pace with Pacquiao, would afford the best opportunities to absorb the eight division champion’s wisdom.

Some of the advice is technical, like when Pacquiao instructed him to lift his knees higher while running hills, or reminders to control his breathing, but much of it was philosophical.

“His English isn’t that great so he keeps it simple. He says, ‘Work hard, fight easy. Push yourself to exhaustion and fight easy,’” said Gonzalez. It’s advice that Pacquiao embodies in his own work ethic. “I’ve never someone work as hard as Manny Pacquiao, I’ve never seen someone just go on and on and on in the gym. That’s at 40 years old, I couldn’t imagine if he was 20 or 30 years old.”

On the last day of camp, Pacquiao caught sight of Gonzalez glancing briefly at his black and white Anta boxing shoes. After finding out they were the same size, Pacquiao instructed his bodyguard to get a pair – one of just two in existence – and give them to Gonzalez.

“So there are only two people who have those shoes, me and Manny,” said Gonzalez, who turned pro shortly after the Broner fight.

He returned for the Keith Thurman camp later that year, sparring for the first three weeks before leaving to focus on his second pro fight, a unanimous decision over Jeremiah de los Santos.

Gonzalez says he isn’t officially with Premier Boxing Champions, despite fighting three straight times on their cards, but he has a working relationship with the well-connected MP Promotions president Sean Gibbons who is helping move his career. And he continues to train at the Wild Card, under head trainer Julian Chua.

There isn’t much video on Gonzalez’s opponent, a 24-year-old from Pittsfield, Ill. But whatever he brings isn’t likely to be as unpredictable as what Gonzalez has seen in the ring out in Hollywood.