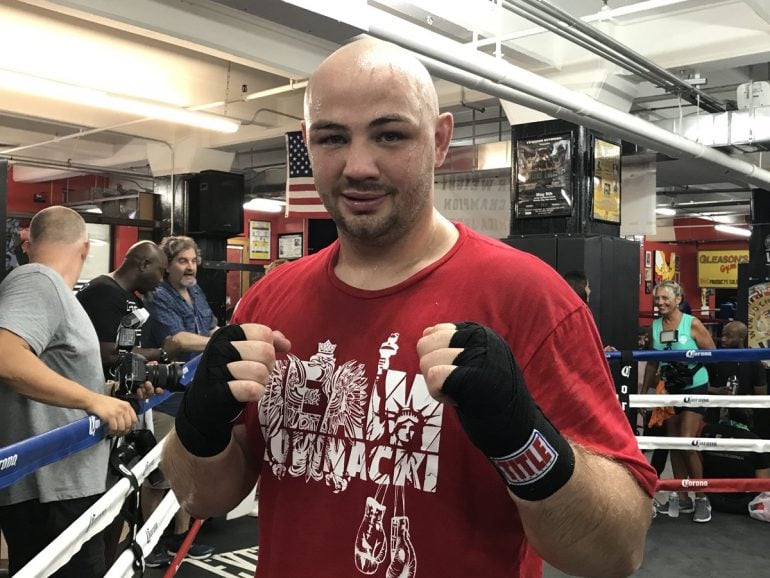 Adam Kownacki goes about his business without any outward signs of frustration. A few weeks ago, he looked on with a smirk on his face as former IBF heavyweight titlist Charles Martin pounded Gerald Washington on the Tyson Fury-Deontay Wilder rematch undercard in an IBF title eliminator.

Kownacki (20-0, 15 knockouts) had a right to grin. He beat them both Martin and Washington. The Polish star doesn’t rattle easy. He stays steady and moves along, counting down the days and the time until he gets his chance at a title. It may be soon.

But first, Kownacki will go about his business and that’s preparing to fight Robert Helenius (29-3, 18 KOs) this Saturday in a WBA heavyweight title eliminator in the main event at Barclays Center on FOX PBC Fight Night (8 p.m. ET/5 p.m. PT).

“I understand the politics of boxing and I know I’ll get my chance,” said Kownacki, who is coming off his first 12-round victory, when he beat former title contender Chris Arreola at a career-high 266 pounds. “I have learned to stay in shape all year round and be ready anytime someone calls. Last year, I wasn’t ready to fight Anthony Joshua after (Jarrell) Miller fell out, because I wasn’t in shape.

“Now, my goal is to stay in shape 12 months a year. If I get the call, I’ll be ready the next time. The last time I fought, I was 266, but I’m around 260 pounds now and my conditioning is right up there. I see these other guys, like Martin and Washington have a chance at a title. But it’s not frustrating. God works in mysterious ways.

“I’m watching more what I eat, making sure I don’t blow up between fights. I used to blow up to 280 between fights. I can’t get that heavy again. But I feel good right now. Against Arreola, I felt good. I was 266, but I was motivated and Arreola is a tough guy.”

This is a big year for Kownacki, who is ranked No. 9 by The Ring. There is something also interesting among The Ring’s top-10 heavyweights:

Kownacki is the only fighter with a pristine record. Fury has a draw on his ledger, and after “The Gypsy King” vanquished Wilder on Feb. 22, every heavyweight ranked in The Ring’s top 10 has at least one defeat or one draw.

Everyone, that is, except Kownacki.

“I plan on keeping it that way,” Kownacki promised. “I came into this year with the goal of being a champion. I beat Martin who was a title holder. I beat Arreola who fought for a title. I beat Artur Szpilka who fought for a heavyweight title. This fight will get me up there, since I’m ranked pretty high in many organizations.

“I’m just hoping to get the opportunity.”

Kownacki, 30, has done his homework on Helenius. He’s 6-foot-6½, three inches taller than the 6-foot-3 Kownacki. He’s 36 and was stopped by Gerald Washington in the eighth round last year. The same Gerald Washington that Kownacki took out in two in January 2019.

“I’ll work behind the jab, and work the body, get inside and make it an early night,” Kownacki said. “I had a son in August, and he keeps me up at night sometimes, but it has changed my life. I watch him smile and learn new things every day. It’s truly amazing. I have greater motivation knowing I have a son and knowing my success will make his life better.”

“Adam is working behind his jab a lot more, and he’s better at getting his distance down,” Trimble said. “Honestly, watching Fury and Wilder, I learned that you can bully the bully. Adam is a pressure fighter who moves forward. Fury implemented the pressure and did well. Adam belongs where he is. The guy has had tough fights. He doesn’t have a padded record.

“Adam has been going through everybody, and has been staying in shape between fights. Adam destroyed Washington in two, and in my opinion, he won eight out of 10 rounds against Charles Martin. I can’t see why Adam wouldn’t get a title shot, if he does what he should do, and what we know Adam can do.

“We have to play the waiting game. In the meantime, we have a job to do and that’s to beat Helenius. At the end of the day, this is not rocket science. Adam knows he has to get inside and his pressure will wear Helenius down. We’ve been working on Adam’s head movement and we would like to see him use it this time. He can take a punch, and give a punch. Adam has always worked hard, and now he’s coming into camp already in shape.”