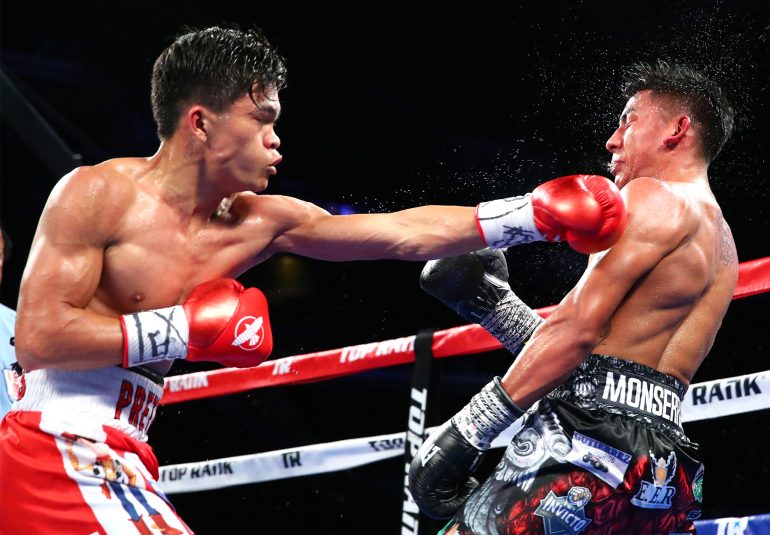 Jerwin Ancajas lands a left hand against Israel Gonzalez during their first meeting in 2018. They will likely meet a second time after Gonzalez was named mandatory challenger. Photo by Mikey Williams/Top Rank
01
Mar
by Ryan Songalia

For Jerwin Ancajas, watching Roman Gonzalez in the ring Saturday night against Khalid Yafai was like taking a peek back into time. Gonzalez looked like the “Chocolatito” of years past, as he outfought the previously unbeaten British boxer on the inside, using uppercuts and positioning to confound him before scoring a one punch knockout in the ninth to win the WBA junior bantamweight title.

“I salute Chocolatito. I can say that one of the best at 115 is back,” said Ancajas, holder of the IBF title at 115 pounds.

“For me Chocolatito’s style really did not change. He really used his own style; he has combinations, movement and stamina.”

Ancajas (32-1-2, 22 knockouts) watched the fight from his training camp in Dipolog City, in Zamboanga del Norte, Philippines. He says he has long wanted a fight against Gonzalez (49-2, 41 KOs), a future Hall of Famer because “his style is so challenging,” but that and any other marquee matchups will have to wait.

The 28-year-old from Panabo City, Philippines has been ordered to face mandatory challenger Israel Gonzalez, the streaking contender whom Ancajas had stopped in ten rounds nearly two years ago. The order came down on Jan. 6 of this year to begin negotiations, but when the two sides failed to reach an agreement, a purse bid was ordered.

That purse bid is set for noon on Tuesday, March 3, at the IBF’s office in Springfield, N.J., according to a document obtained by The Ring.

Since their fight in 2018, Gonzalez (25-3, 11 KOs) of Los Cabos, Mexico has won four out of five fights, with the lone defeat being a unanimous decision to Yafai in November of 2018 in a fight that could have otherwise been judged a win for Gonzalez. The 23-year-old solidified his status as no. 1 contender in December, traveling to Japan to outpoint Sho Ishida.

Aside from Ancajas and “Chocolatito,” the other titleholders include Juan Francisco Estrada, who holds the WBC belt and Ring Magazine championship, and WBO titleholder Kazuto Ioka.