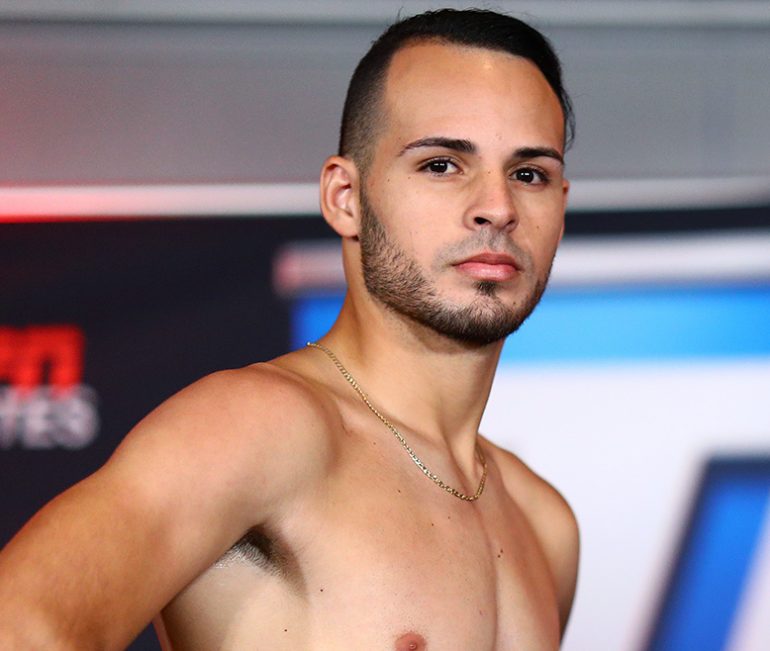 Alamo-Castaneda was an intriguing clash of unbeaten junior welterweights. Aside from the almost identical records, it was a compelling clash between the more-technical Alamo and the aggressive Mexican-American in Castaneda.

From the opening bell, Castaneda was the aggressor, walking Alamo down as he looked to connect with lead or counter hooks and crosses. Alamo remained composed, countering with jabs and straight right hands to the head of Castaneda.

Both fighters let their hands go during the final 30 seconds of the second round, connecting to the head and body as Alamo fought off the ropes.

Castaneda was the busier and more-effective fighter during the middle rounds. Midway through round 5, a combination to the head from Castaneda hurt Alamo, who initially held on, but attempted to rally at the conclusion of the round.

During the final three rounds of the fight, Castaneda’s punch output dropped considerably. He continued to be the aggressor, but left himself open to be countered as he initiated exchanges. Alamo let his hands go, connecting with counter right hands or left hooks to the head. Both let their hands go during the final moments of the round 10, embracing each other after the bell sounded to end the fight.

“We left it all in the gym,” said Alamo after the fight. “(Trainer and former world titleholder) Ivan Calderon is a star and he’s going to make me into a star. That’s for sure. I’m 100 percent dedicated.”

“I didn’t feel (Castaneda’s) power. I felt his strength. He’s Mexican and he has his strengths. He’s a great champion.”

Castaneda was diplomatic in defeat.

“I felt a little tired towards the end of the fight,” said Castaneda, who is promoted by Roy Jones Jr. “There are no excuses. That’s the sport for you. Alamo was the better man tonight. I would like to fight him again. These are the fights that make the rivalry between Mexicans and Puerto Ricans great.”

In the co-feature, Orlando Gonzalez dropped Charlie Navarro twice en route to a knockout victory in round 4.

Gonzalez (14-0, 10 KOs), a southpaw from Aguadilla, Puerto Rico, dropped Navarro in the opening moments of the third round. Gonzalez continued to break Navarro down with each passing moment, landing thudding punches to the head and body.

Less than a minute left in round 4, Gonzalez landed a left to the stomach, dropping Navarro in a corner where he remained as referee Christopher Young counted him out at 2:20.

In lightweight action, Jonathan Conde (2-4, 2 KOs) of Miami, Florida scored a one-punch knockout victory over Orlando’s Angel Lopez (6-3, 6 KOs) in the opening round.